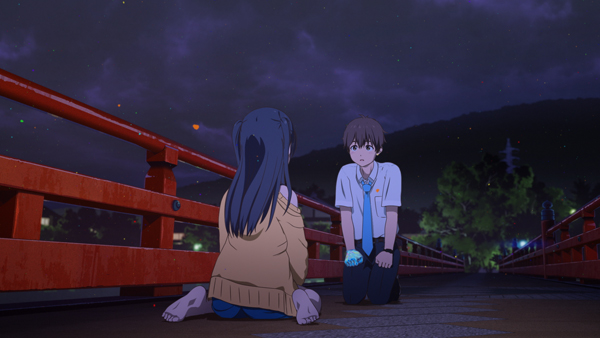 Naomi Katagaki (Takumi Kitamura) is a shy, bookish high-schooler who is assigned to the school’s library team, alongside other students including Ruri Ichigyo (Minami Hamabe). Ruri is also quiet and it seems that the two would make a good couple if either was confident enough to make the first move. The Kyoto of 2027, when the film is set, is part of a large scale project by the government to record the city for a vast historical record. Naomi is forced into action when he meets a future version of himself who explains to him that Naomi’s reality is in fact a version of Kyoto stored in a computer system known as Alltale. This future Naomi (Tori Matsuzaka), explains that it is imperative that he establishes a romantic relationship with Ruri and protects her from a tragedy that is to occur in the near future. With his future self’s help, Naomi sets about doing this, also being given a powerful tool to manipulate the simulated world around him; but things to not go smoothly when the system begins to reject the changes that they are causing to the historical record.

Based on a screenplay by Mado Nozaki and directed by Tomohiko Ito, “HELLO WORLD” switches up the highschool romance formula with elements of time-travel and science-fiction. Naomi is a familiarly sympathetic awkward teen, who struggles to confess his feelings to Ruri, who later transforms into something more akin to a superhero along with world-changing powers. It is an interesting dynamic, drawing together the two genres of high-school romance and superhero action. The film pulls several narrative twists throughout that keep things interesting and break with tradition, reveals about the true nature of the world and character motivations.

Heavily utilising computer-aided design and animation techniques, these stylistic choices pay off later in the film with truly incredible moments when Naomi’s reality begins to break apart around him. The use of computer animation also allows for a striking contrast between rainbow coloured elements and hyper-realistic backgrounds that gives the film a unique feel and helps further the sense of a world that is at once tactile and believable yet prone to collapsing into a the maelstrom of a corrupted computer system. The visualisation of computer program elements, a mix of authoritarian police officers and folkloric animal spirits further demonstrates the film’s creative blending of genres and styles. It is a testament to the strength of the protagonists that with such a chaotic backdrop of collapsing realities, not to mention the very nature of their own existence, that the central relationship between Naomi and Ruri manages to hold our attention and inspire sympathy for their situation.

“HELLO WORLD” is a curious film as it juggles several plots at the same time. Naomi’s relationship with Ruri, his attempt to become the hero of his own story, win the beautiful maiden and save her and the world from its impending doom, is a familiar journey for young male protagonists. Through his spiritual and emotional guide, the older version of himself, he learns to be confident and finally manages to transcend even his ‘all-knowing’ mentor to become able to direct his own destiny. The other theme the film tackles is the nature of reality and questions around fate, free will and the purpose of our personal struggles. Naomi takes the knowledge that he is part of a computer program surprisingly calmly, considering he is being told that he is not living in the real world, only a simulation. Everything around him is essentially pre-recorded and therefore predestined. This new understanding of the world around him gives him great power, allowing him to manipulate the events and people around them as his future self directs him to. It also challenges the audience to consider if it would be possible to alter this ‘reality’, something the computer program attempts to counter as it would jeopardize the stability of the system. More interestingly than these free will versus determinism questions, is the focus on Naomi’s own psychology. He continues to fight for Ruri, whom at first he is even reticent to talk to, despite learning that in fact this world he is in is not the true reality. It is an interesting dilemma and highlights the idea that humans can only interact with the world subjectively. To Naomi, his experience is all that matters; there is no point fighting for anything other than his own desires, even those of his future self. “HELLO WORLD” is a film that weaves a psychological science-fiction narrative through a romantic high-school melodrama, creating a story that toys with your mind as much as your emotions.