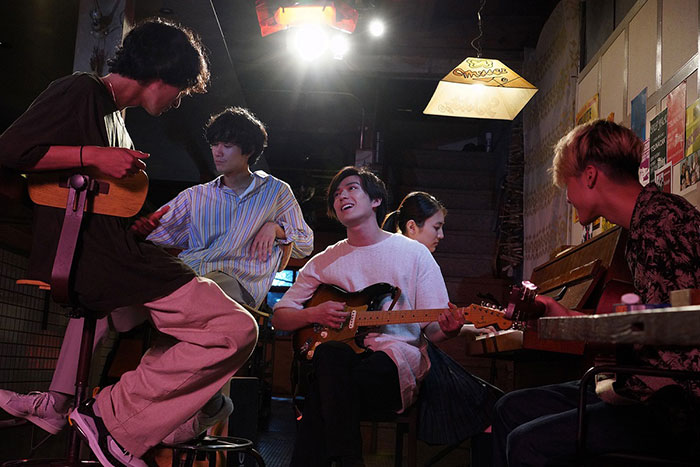 A recently deceased young man is given a second chance to make things right with the band and girlfriend he left behind. In a montage sequence we see Aki (Arata) meeting his girlfriend Kana (Sayu Kubota) on the way to a music festival; he starts a band with his friends and Kana; they have their fallings out; and Aki is later killed in a car accident. Later, Sota (Takumi Kitamura) a socially awkward job-hunting graduate finds a tape player Aki had dropped. When he hits play, Aki’s spirit is magically transferred to his body, while Sota is left to watch himself in an outer-body experience. The two soon discover that the tape player offers Aki the chance to live again for 30-minutes at a time inside Sota’s body. When he is not inhabiting him, Aki appears as a ghost who only Sota can see or hear. Sato realises the outgoing and jovial Aki can help him with his as-yet unsuccessful job interviews; while Aki wants the chance to get his band back together and make Kana happy again.

“Our 30 Minute Sessions”, directed by Kentaro Hagiwara from a script by Satomi Oshima, treads some familiar ground for the young adult romantic comedy drama. The premise of a ghost returning in an attempt to reunite with his lost love is given a fresh take with the use of the tape player and its various limitations. Singer Arata is great as the exuberant and eternally hopeful Aki, giving off an energy that makes us root for him, meanwhile Takumi Kitamura’s Sato is the perfect foil, a young man struggling to come out of his shell and discover his potential. Sayu Kubota as Kana is charming and the band all have good chemistry in their interactions.

Music plays a central part in the film and much of the cinematography is reminiscent of music videos; stylish shots and metaphor heavy montages. At one point it even tips into a musical number that does not seem out of place with the rest of the film. Montages are used in the film not as a shortcut but in a genuinely impactful way as they emphasise the themes of time passing and the partial and imperfect form of memories. The film wastes no time either in this approach, with the opening sequence in particular being a perfect example of efficient storytelling without long establishing or expository scenes. The story has few unexpected twists as once the premise is established there are certain beats that are bound to be hit; but with excellent performances and clever interweaving of narrative and theme it is impactful when it wants to be. As with any film involving magical elements, many things are left unexplained, however the film is well-paced and heartfelt enough that the plotholes and narrative trickery rarely detract from the story.

“Our 30 Minute Sessions” deals with the theme of death by instead focussing on the memories that the deceased leave behind. Aki explains to Sota that the tape recorder he uses to record song ideas has been taped over numerous times, largely erasing what has gone before. This is something that Sota, who is overly concerned about every detail of his life and how he is perceived, finds hard to comprehend. Aki’s philosophy is that life is for living; there is no point dwelling on past memories, but instead we need to be constantly moving forward and creating new ones. This is not to say that he should be forgotten, but rather that the best way to honour him is to continue moving forward with that same positivity and lust for life. When Sota first meets them, Aki’s bandmates and Kana have largely shut away their memories of Aki. They do not wish to continue with the band, or play the old songs. Sota’s appearance, quite literally embodying Aki’s spirit, gives them licence to begin enjoying life again, and truly respecting his wishes to be happy. An entertaining drama that breathes new life into a familiar format, with great music and a superb cast.