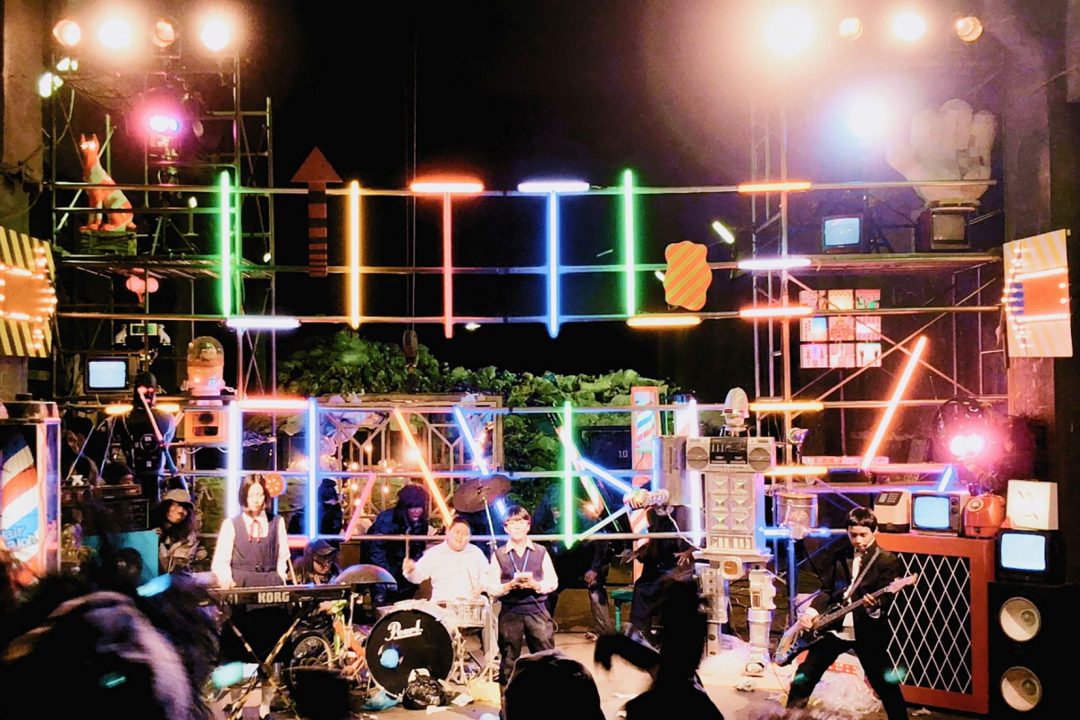 We are Little Zombies (2019) by Makoto Nagahisa

After Hikari’s (Keita Ninomiya) parents die in a bus accident, he meets three other children at the crematorium who have likewise lost their parents, through suicide, murder and in a house fire. The four form an unlikely friendship, united by tragedy, and head out without any real plan of what they will do next. They return to each of their homes in turn, recovering items they have left behind, and reliving the circumstances of their parents’ deaths. While sitting around in a slum building populated by homeless individuals, they decide to form a band and are picked up by a talent scout who happens by while they are performing. As the “Little Zombies” they soon enjoy huge popularity with the disaffected youth of Japan, but it seems as though not even stardom will puncture their sense of detachment from the world around them.

“We are Little Zombies” is a film with a dark sense of humour, beginning from the opening scenes at the crematorium. While most films dealing with bereavement would show an emotionally tumultuous coming-to-terms with loss, this film takes the polar opposite approach. Instead it shows the characters, especially Hikari, as completely unphased by what has happened, unable to cry over his parents who were cold and distant in life. Instead he is permanently lost in the otherworld of his handheld video games. Likewise, the other characters deal with their situation stoically, death having seemingly little consequence for those who are left. Writer/director Makoto Nagahisa shows huge creativity in this idiosyncratic film, with the use of a digital 8-bit soundtrack and camera angles giving the feel of a  videogame (at times even cutting to game graphics that represent the four main characters). There is a sense that anything could happen as characters talk direct to camera, dream sequences and inner monologues interrupt the action, and fantasy increasingly intrudes into their realities. As the film progresses, the bizarre situations only increase. This sense of anarchic surrealism is in keeping with the youthful protagonists. They look on calmly as the world about them grows increasingly strange. The songs are catchy and the jokes are good. The four leads (Ninomiya, Satoshi Mizuno, Okumura Mondo, and Sena Nakajima) do a fantastic job, oddly compelling in their unemotional response to their parents deaths and charismatic in their interplay as a group of friends. The music, composed by the director, is great, playing on everything from videogame themes to loops of shop music and classical pieces.

The film takes an unconventional approach to the themes of loss and grief. The characters all seem emotionally detached from the world, whether because they genuinely lack compassion or are struggling to come to terms with their experiences. The loss of their parents has untethered them from the usual coping mechanisms of children. They are all at sea and rather than dealing with the death of their parents they have isolated themselves emotionally. However, this comes at the cost of a loss of direction. They live for minor accomplishments, similar to those achievements of video games. The structure of the film, as “stages” and “missions”, highlights this lack of an overarching purpose in their lives. It is in the end a film that is about life and what people live for. The deaths early on are a stark reminder that there is in the end little purpose to life in itself outside of what people can create for themselves. “We are Little Zombies” is a quirky film, revelling in its black surrealist humour, but with a great deal of heart beneath the surface.