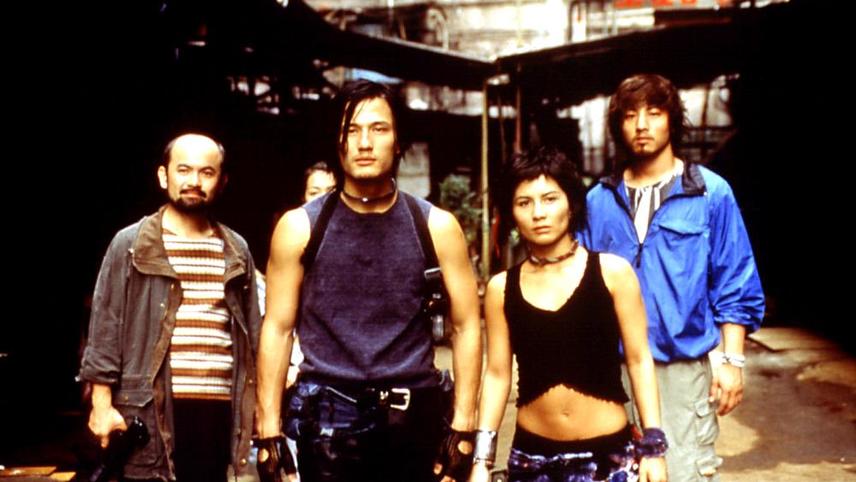 Set in a future dystopia, “Dead or Alive: Final” is a speculative science-fiction involving replicants, totalitarian government and a nascent rebellion. Show Aikawa plays a replicant, imbued with powers of super-speed, able to catch bullets, and indestructible. He is taken in by a family who are fighting against the oppressive regime of a flamboyant dictator. The population are kept under control by being forced to take a pill that makes them infertile. It is suggested that procreation is no longer required in a world where replicants are prevalent. Riki Takeuchi plays a police officer who is attempting to root out and destroy the resistance fighters that threaten the dominance of the leader.

The third part of this trilogy is quite a departure from what has gone before. Being a future science-fiction it allows Takashi Miike to explore themes from a new perspective, by examining what a future Japan might look like. There is an international feel to the film, with Chinese and English spoken frequently alongside Japanese, in common with his previous work on the “Black Society Trilogy”. The idea of a population being kept in a state of oppression and forced to consume the birth control drug is a clear satire of Japan’s problems with population decline, subservience to government, and perhaps even the conservative values that typify modern society. A few of the elements may seem derivative, such as the idea of replicants, but there are definitely unique flourishes. The film is a little uneven in terms of the balance of comedy and drama. Usually, Miike is good at this, but here it is unclear what is parody and what is serious. This is partly due to the lack of money and resources to create an effective future world. The special effects are stretched to breaking point, especially towards the  end of the film. The ending is somewhat incomprehensible for another reason. It draws in scenes from the previous two “Dead or Alive” films that really have no place being here. While there are parallels between the films, sex, violence, crime, themes of childhood and fate, woven through each, and the main actors are the same, there is really little connecting them. It comes across as though the leads here are remembering past lives, but doesn’t provide the audience with enough to make any coherent point about the three films as a whole

There are some interesting ideas here, but a lot have been done before and better. The concept of replicants is raised though never fully addressed. This is exemplified in the scene where Riki Takeuchi discovers that his family are replicants. It should be a dramatic moment, but since the concept is only vaguely established in the world this revelation has little impact. The idea of a society struggling with a lack of reproduction, or the diminishment of the importance of sex and reproduction is likewise a fascinating avenue, but it seems the film always shies away from exploring anything in depth. Worth watching for a couple of standout scenes, and again capped with a bizarre, unforgettable ending, but doesn’t quite live up to the standard of the earlier films. 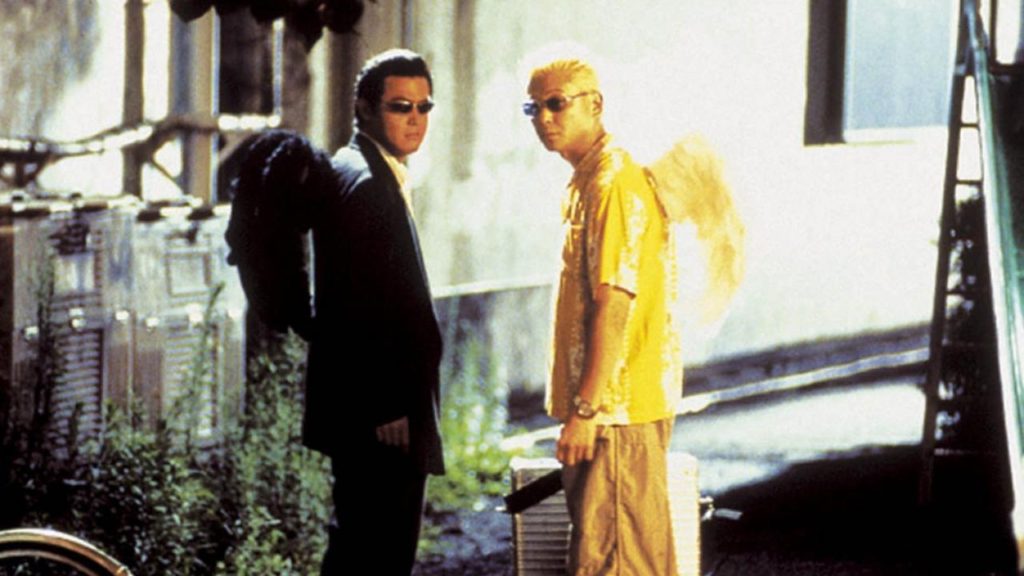 Two assassins meet unexpectedly when they are both contracted to kill the same man. After realising that they were actually childhood friends, they decide to escape from the city and return to the island where they were brought up, visiting a third friend who is now living there with his pregnant wife. After their respite the two decide to return to the metropolis and use their skills as professional killers to benefit orphans in the third world, by sending the money they make overseas. This soon brings them back into contact with the violent gangs they had previously escaped.

After the grotesque comedy of the first Dead or Alive film, this is a much more sedate affair. There is still puerile humour, sex, violence, and quirky storytelling with bizarre plot twists, but throughout is a strong central theme helped along by fantastic performances by Show Aikawa and Riki Takeuchi. The two actors this time play the assassins returning to their hometown, reliving former traumas and triumphs along with their old friend. Both are charismatic and it is good to see them getting more screen time together. The story meanders its way through their reminiscences and may not appeal to those fond of the more frenetic pace of the earlier film, but it does a much better job of creating likeable characters. Takashi Miike brings a visual flair and intelligence to the directing that keep things interesting. There are moments of pure cinema, such as when the characters sprout wings, one black, one white, or when we see feathers falling from nowhere after a murder, or when the characters transform into their childhood selves.

It may seem out of place to have a school play half-way through a film about hit-men, especially one that is juxtaposed with a sex scene and gangland murders in another part of the country, but it typifies what makes this movie great. By creating a powerful contrast between the placid life of the small island community with the horrors of inner-city crime we get a picture of divided characters, contract killers who still retain their basic humanity. The film is essentially about a loss of innocence as we see what these young boys have become, and their attempt to regain that through travelling back to their old town. The plot involving the two killers helping young children out with money through the proceeds of murder is a fairly pointed commentary on what is wrong with society, and done in a way that makes it seem like common sense (why not kill bad guys and give the money to helpless orphans?). It is great to see a film that has the confidence to tell its audience uncomfortable truths, while at the same time not being overly moralistic. 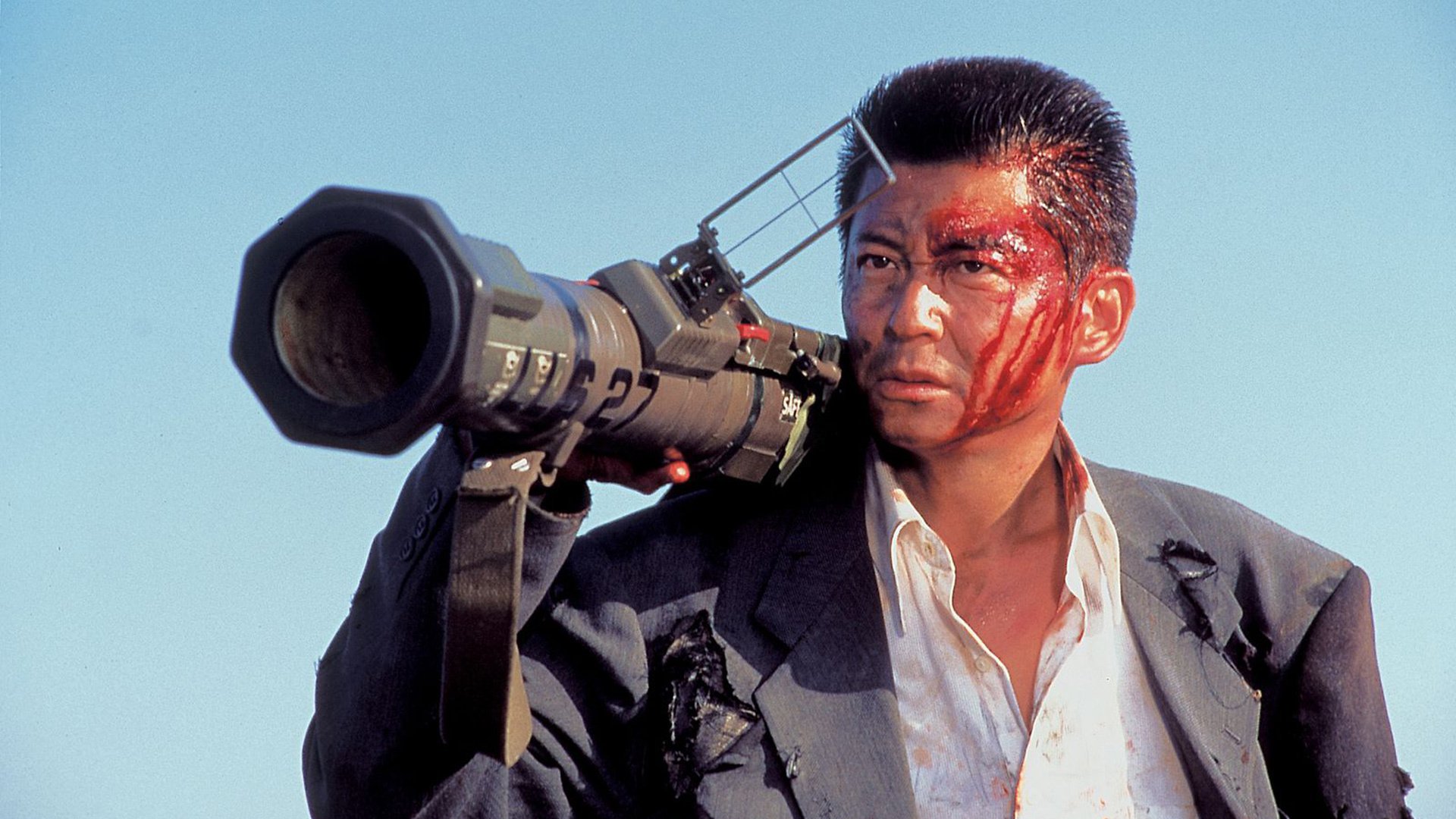 The film’s opening sequence knocks you over the head with its rebellious attitude. Intercutting between a strip-show, cocaine snorting gangsters, a shoot-out, and an apparent suicide, are coming at you so thick and fast that it is overwhelming. Once the narrative proper starts there is a clear intent to shock, with bestiality porn shoots, a horrific death involving an enema, and several other alternately horrific and hilarious set-pieces. The central story involves a feud between gangster Ryuichi (Riki Takeuchi) and police detective Jojima (Show Aikawa), though it is hard to say that is what the film is truly about. Rather that rather staid plot is used as a canvas for director Takashi Miike to create a work that is troubling and humorous in equal measure.

Director Takashi Miike’s “Black Society Trilogy” established his reputation as a talented film-maker, with an exciting, politically conscious take on the Yakuza genre. With Dead or Alive, Miike again tackles many of the same issues, but there is something different in “Dead or Alive” a punk aesthetic that is typified in the extreme opening and closing sequences of the film. It almost feels as though Miike is attempting to sabotage his own work, although it might be politer to suggest he is creating a post-modernist masterpiece. There are a number of fantastic scenes here, building character and back story, and Takeuchi and Aikawa give incredible performances throughout. During the interrogation scene there is an almost unbearable tension between the two leads. Watching a Miike film you are aware that he is fully in control. If he wants you to feel panic, dread, to laugh or be shocked or even upset, he can, casually confounding your expectations throughout. The film is such an eclectic mix of slapstick and gross out humour wrapped around a core of serious crime drama that it shouldn’t work, but somehow it does. Miike almost seems to be suggesting that he could make a great Yakuza epic if he wanted, but is constantly distracted by some wild or hilarious idea with which to toy with the audience, or perhaps it is all a commentary on the film industry, or whatever else occurred to him that day.

Miike delights in taking well-worn stories about cops and gangsters and turning them on their heads. There is social commentary here, on crime, the treatment of women, immigration and more, but it feels as though the whole thing has been through a blender. It is a kaleidoscope of ludicrous over-the-top moments, sombre family drama and scatological humour. Obscene, bizarre, satirical, at times emotionally raw, it is a film that pulls no punches.