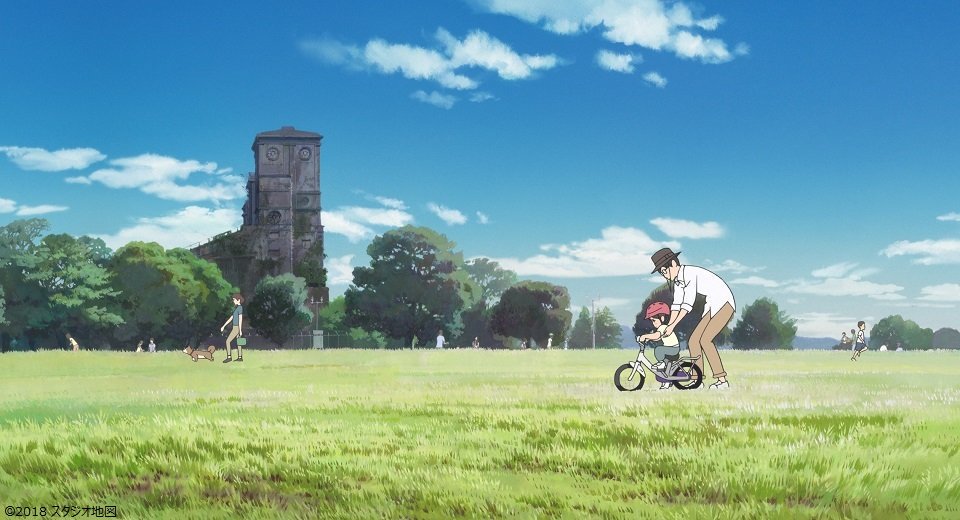 Kun is a feisty two-year old, obsessed with trains, living with his parents and their dog. When his parents arrive home with his baby sister Mirai, Kun is initially ecstatic about the prospect of a new member of the family. However, he soon realises that the attention he was receiving is now being given to his sister. Feeling left out, he begins acting up, with angry or tearful outbursts at the unfairness of his situation. When he goes out into the garden he is whisked away on flights of fancy, meeting various figures from his family in different guises or at different stages of their life. These figures each teach Kun a valuable life lesson.

Director Mamoru Hosoda (Wolf Children, The Boy and The Beast) is no stranger to stories about the pain of growing up. In “Mirai” he takes a look at a very young character, Kun, and how children can often feel ignored or side-lined with the arrival of a younger sibling. The situations shown in the film will be familiar to those with siblings, or parents raising young children, with temper tantrums and everyday problems running a household. The film itself seems to be aimed at a younger demographic, both in its sense of humour and in the instructive adventures Kun goes on. It has something of a fairytale feel, with the young boy going on a journey of discovery and coming back more mature and enlightened. The animation is enjoyable and the team capture the motion of children and animals well. It is interesting to see the majority of the film take place in a single location, the family home, and as it goes on you get a real sense of place and almost come to know the house as well as the characters. There is also some excellent use of computer graphics and modern techniques, such as in rendering steam on a windowpane, or the expansive birds-eye view of the city where the family live. The fantastical moments are a welcome break from the mundane everyday routines of the family. I found the most affecting moment towards the end of the film, when they bring what has until then being a series of seemingly unrelated occurrences together into some semblance of structure. The film may be less enjoyable for older children or adults as the lessons Kun learns all boil down to something fairly similar and obvious, although the film does have some creative scenarios for the fantasy sequences. The film also often feels as though it is a collection of interesting ideas and moments without a cohesive narrative to hold it together.

Mirai does an excellent job of portraying the emotions of its young protagonist. The arrival of his sister leaves Kun feeling neglected and unloved. In order to cope he escapes into his own world in an attempt to understand what he is feeling. It is a journey of discovery for Kun as he attempts to understand that he is part of a larger whole, and to accept that kindness and co-operation are better than selfishness. It also has important lessons for children about never giving up and perhaps how to deal with difficult emotions by distancing yourself from them and attempting to rationalise your feelings as Kun does. The film also touches on the notion of fate and the impact that small acts can have on the future.