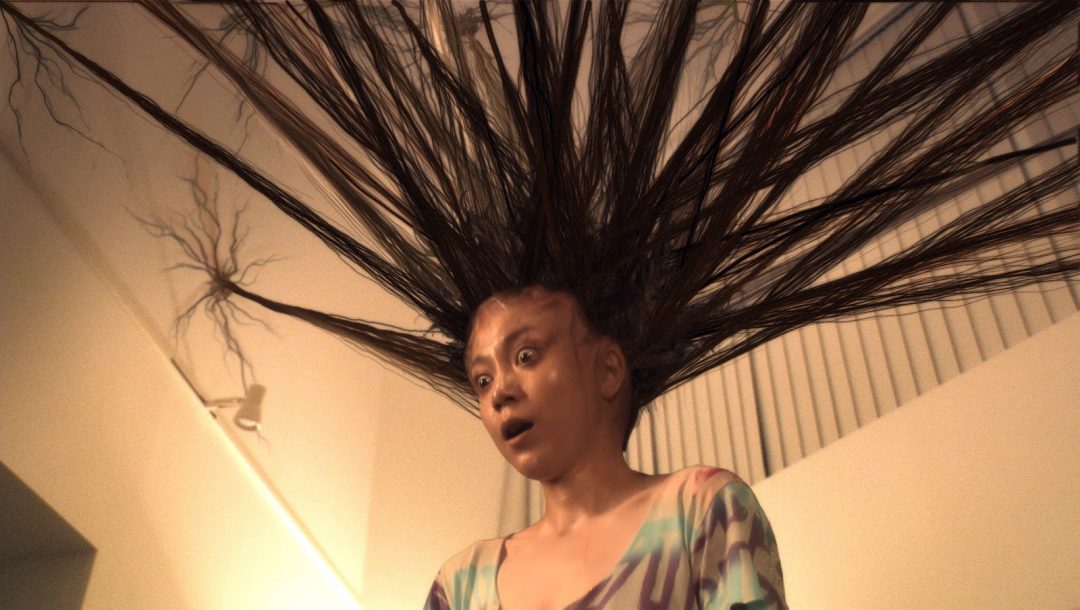 Yuko (Chiaki Kuriyama) stars as a wannabe hair stylist sweeping floors at a salon. When her wayward half-sister Kiyomi (Tsugumi) leaves her young daughter Mami (Miku Sato) with Yuko, she discovers that the child has been badly abused and neglected by her sister and decides to look after her. Meanwhile, Yamazaki (Ren Osugi), a man with a serious hair fetish, steals a corpse from the mortuary where he is working, cutting off the endlessly growing hair for use as hair extensions, which he provides for use at salons. The hair still retains the tortured soul of the deceased, the victim of an organ harvesting gang, and is soon causing havoc, killing indiscriminately. It is not long before Yuko’s own salon is given this questionable hair and she must fight to protect Mami.

“EXTE” is directed by Sion Sono, a master of the bizarre and ridiculous. The film mocks the common trope of ghost stories where long black hair is a defining feature of their characters. It is a satirical look at the banality of much of the genre. This is evidenced early in the film with the risible dialogue between the dock workers in the opening, and Yuko narrating her own introduction, drawing attention to how predictable and uninspired the film’s set-up is while also being a clever way of getting through what would be dull exposition, character names and quick personality checklists. The film repeatedly undermines itself in this way, creating a tone that is self-referential comedy horror. There are moments of terror in the film, whether the flashbacks of the young woman’s torture at the hands of organ harvesters, or the more commonplace horrors of child abuse that Mami suffers at the hands of her mother. In this way the film almost lures you in with the promise of something throwaway while subverting expectations by actually delving into some genuinely dark themes. Chiaki Kuriyama is likeable as Yuko and does a good job with the various tones that the film attempts, from lighthearted drama, to scenes of emotional distress. Tsugumi is deeply unlikeable as her sister, and Ren Osugi brings a scenery-chewing eccentricity to the creepy, hair-obsessed recluse Yamazaki. Sono again shows his skill with direction, pushing the special effects too far at times to create an over-the-top aesthetic that never takes itself too seriously. The use of a Christmas jingle is one example of this unorthodox style, another the impromptu song performed by Yamazaki, that is irreverent and inappropriate yet entirely in keeping with the rest of the film.

Sion Sono is having fun with J-Horror tropes with EXTE, creating a humorous deconstruction of typical ghost stories that have dominated the genre. The decision to set a fantastical supernatural evil against the genuinely terrifying sublot of Mami’s abuse at the hands of her mother, is potent. Perhaps the film’s way of saying that typical horror audience’s focus on ridiculous or unlikely horrors leads them to overlook everyday traumas. Yamazaki can also be seen both as a caricature of the sinister lurking figure common in horror films, but also as a much darker stereotype. His fetish and objectification of the corpse could be a commentary on the beauty industry and male perversions more widely. He does not care about women, only about the hair. The hollowness at the heart of “EXTE” is symbolic of the lack of meaning or significance in much of the horror genre or society more widely. Everything is superficial and fake (in the same way that the hair extensions are taking reality and making it something frivolous and unnecessary). A satirical side-swipe at the whole horror genre, that revels in its irreverent tone and delights in subverting expectations.