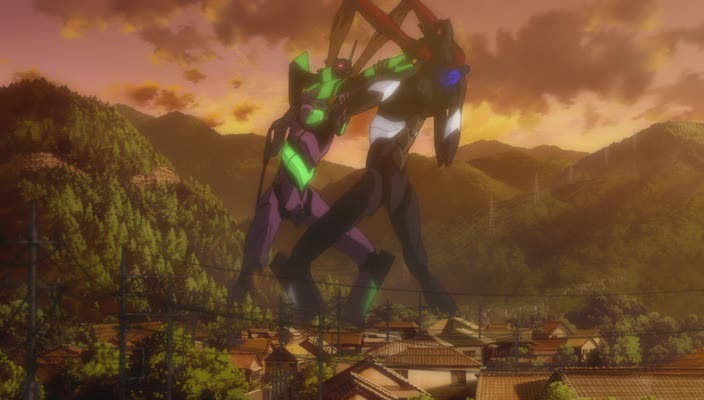 In this instalment of the “Rebuild of Evangelion” series we are introduced to a new Eva pilot, the feisty, confident Asuka Langley Shikinami (Yuko Miyamura), who joins Shinji (Megumi Ogata) and Rei (Megumi Hayashibara) in battling the Angels. There are a number of other subplots introduced here, with the return of Ryoji Kaji (Koichi Yamadera), a former friend of Katsuragi (Kotono Mitsuishi) who appears to be involved in some sort of plot with the head of NERV. We also see more of the shadowy SEELE organization, and two more Eva pilots, Kaworu Nagisa (Akira Ishida) and Mari Makinami (Maya Sakamoto).

This time round there is much more going on in the story, with the film asking you to keep track of several plot threads. The film manages to fill its run-time with great character interaction, extreme action scenes with clashing Angels and Evas, and numerous mysteries to keep things interesting. Asuka is a great addition as she adds not only more firepower to NERV, but also another stumbling block for the socially awkward Shinji to tackle. We learn more about Katsuragi in this film, and even something about Gendo Ikari (Fumihiko Tachiki) that goes some way towards explaining his cool demeanour. The film sees a step up in the level of violence, underscored with a rock inflected soundtrack from Shiro Sagisu as we see the Evas literally tearing Angels apart, and cities awash with blood. As in the first the animation is incredible in evoking a sense of scale. The film’s mix of mechs and metaphysics comes to a head in the final head-spinning moments when the fate of the earth and humanity are brought to a thrilling (almost) conclusion. This second film builds on everything the first did so well, the intriguing interpersonal struggles, the awe-inspiring action, while adding several more layers to everything to create a film that rewards re-watches for details that perhaps only become clearer with greater context from subsequent films.

“Evangelion 2.0” deals a lot more with the themes of family, friendship and belonging, as we see the children enjoying themselves, and even a tender scene between Shinji and his father. Asuka represents everything Shinji is not, confident and fiery, but both share a sense of selfishness and repressed fear of rejection. The film sets up various conflicts, between Shinji and Asuka, Shinji and his father, SEELE and Gendo, NERV and the Angels. It is a world in which there is no clear sense of right or wrong. Shinji is again forced to work out what he stands for. The film ends with an awesome, tantalising, bewildering cliff-hanger, that upends everything that has gone before and leaves you desperate to find out what will happen to the characters. An incredible sequel that brings together adrenaline-pumping action in a battle of truly Biblical proportions.