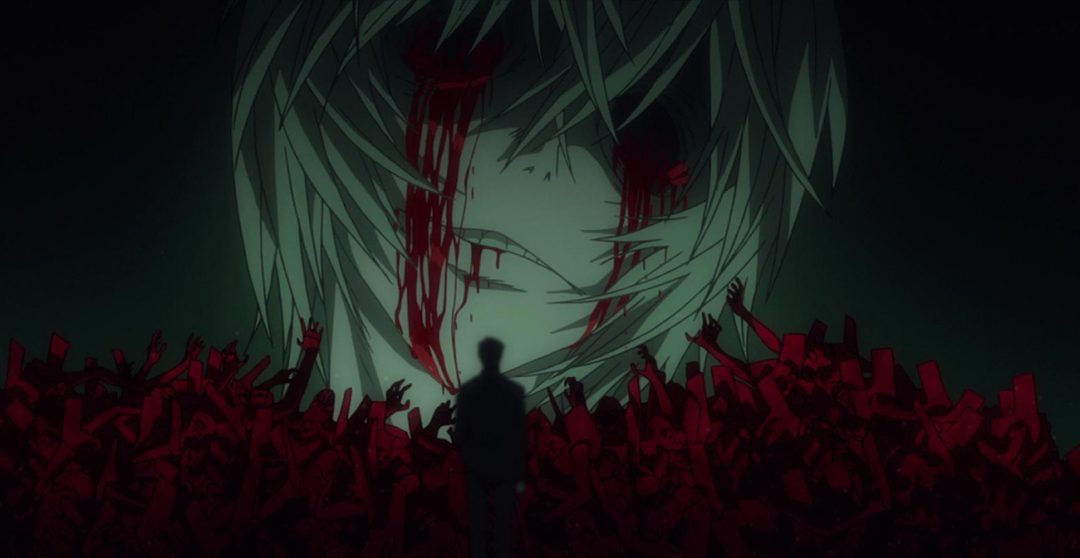 The third Evangelion film finds Shinji Ikari (Megumi Ogata) awakening from a fourteen-year coma following the cataclysmic events of the previous film. Shinji returns to earth to find Misato Katsuragi (Kotono Mitsuishi) in command of a large vessel attempting to protect the remnants of a largely extinct population. Asuka (Yuko Miyamura) returns, though she appears not to have aged (explained away as a side-effect of being an Eva pilot), as does Mari Makinami (Maya Sakamoto); one of Rei Ayanami’s (Megumi Hayashibara) doubles; and Kaworu Nagisa (Akira Ishida) (a character seen only briefly in previous films). The post-apocalyptic earth that Shinji returns to is almost unrecognizable. NERV headquarters are mostly destroyed, Katsuragi and Asuka are working for an organization called WILLE, whose goal is to destroy what is left of NERV. Meanwhile, Gendo Ikari (Fumihiko Tachiki), along with Rei and Kaworu are working on completing the mysterious Human Instrumentality Project.

We are now in uncharted waters, with the third film in the “Rebuild of Evangelion”, being an entirely new version of events from the anime and manga series’. This film is certainly a more difficult watch in many ways compared with the previous two movies. The plot immediately takes you out of your comfort zone with the premise that fourteen years have passed, and the characters we knew and loved have changed. We feel the isolation and neglect that Shinji feels as we are in a world that is very different to the one both the audience and the characters knew. There is less humour this time around with the sombre post-apocalyptic setting and weighty philosophical and existential concerns consuming the characters. The machinations of NERV and SEELE become a little clearer here, as we discover what they are plotting. The animation blends traditional and computer generated images, utilising rotoscoping and other techniques, but maintaining the hand-drawn/ traditionally animated look. This allows for some epic battle sequences, including an incredible opening sequence in space. There are a number of quiet moments too that succeed in offering a moment of respite and a chance to contemplate what is going on and the portentousness of what is happening to the world. Shiro Sagsu’s score continues to be excellent, with both classical and rock pieces, similar to previous films, with piano music playing a major part in the story, used expertly to acknowledge both the mood and theme of the film.

This film plays on the theme of abandonment and loneliness. We see Shinji at the beginning being told that he is no longer a necessary part of plans. That, along with everything having changed around him, leads both him and the viewer to feel a sort of anger and sadness, that the world seems to have left us behind, going so far as to create an uneasy tension between viewers expectations and what is happening. This feeling is poignantly reflected in the character of Rei too, who we learn is a clone of Yui Ikari, Shinji’s mother, and therefore an expendable part of NERV’s plans. Rei’s sense of self is shattered on learning that she is not the ‘real’ Rei. This film is much more focussed on the philosophy and grand themes of human evolution and deicide than the first two. However, there are some great moments between Shinji and Asuka and Shinji and Kaworu that capture that sense of real teenagers learning about themselves and the world. As before the spectacular set-piece battles are a highlight of the film. “Evangelion 3.0” is quite different from the previous films, building on certain themes and relationships while taking things in a whole new narrative direction. The film ends with a note that it is to be continued, and it will be interesting to see where the story goes from here.