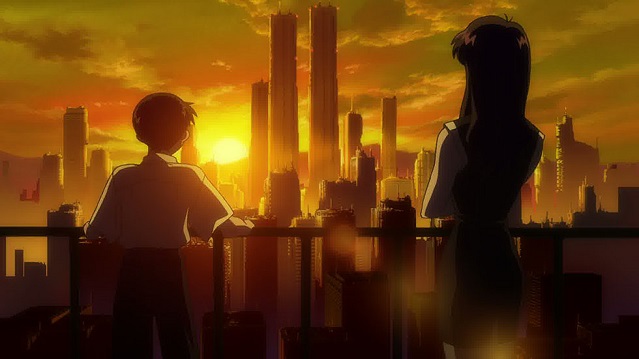 The earth is under attack from giant extra-terrestrial beings known as Angels. The only hope for humanity is the secretive organisation NERV who have created huge robots known as Evas to counter these assailants. The robots require a pilot and so Shinji Ikari (Megumi Ogata), son of NERV commander Gendo Ikari (Fumihiko Tachiki), is conscripted to command the second of the Evas (the prototype being piloted by a mysterious girl named Rei Ayanami (Megumi Hayashibara)). Shinji is soon thrown into a battle that he does not want to fight, aided by Colonel Misato Katsuragi (Kotono Mitsuishi), and urged on by his school friends, Toji (Tomokazu Seki) and Kensuke (Tetsuya Iwanaga).

This feature film brings together the story of the opening episodes of the popular and influential 90’s anime television series “Neon Genesis Evangelion”, being the beginning of a “Rebuild of Evangelion” project. The film includes new scenes and improved visuals, utilising computer aided artwork to create beautifully detailed animation. The scale of the Evas is emphasised as they rise up from the underground base to stand alongside skyscrapers, or dwarf forests and powerlines. One scene shows the empty shell casings crushing cars as they fall from hundreds of feet. The film features a fresh soundtrack by Shiro Sagisu, who also worked on the series, that moves with the shifting tones of the drama; classical piano pieces, comedic sitcom-esque tunes for the scenes at Katsuragi’s apartment, and triumphant battle music when Shinji is fighting to save the world. The story benefits from being brought together in this way, making it easier to follow the numerous plot threads and see ideas develop without being divided into smaller episodes. Director Hideaki Anno has said that this is an attempt to present the story as he intended it to be. Although there is a lot going on, not only the vast city-sized duels between the Angels and Evas, but also complex interpersonal struggles, the film does a good job of keeping everything moving. “Evangelion 1.0” manages to create an absolutely believable world and introduce us to several concepts (Angels, Evas, LCL fluid, New Tokyo-3) naturally through the dialogue. We are brought into the story in media res and though there are numerous things that are inexplicable at first, it helps to establish a sense that these characters and events are real, that we are simply along for the ride. Only occasionally the film will slip into exposition, but largely the audience is credited with being able to keep up with what is happening. Things move from frenetic action during the battle scenes to more sombre moments as characters come to terms with what is happening in their lives.

The film is packed with mysteries that give it a forward momentum. No sooner have we got our heads around one concept, something else appears. This continues until the film’s final moment which comes completely out of the blue and provides a great hook for the future films in the series.

The strength of “Evangelion” is in its fantastic characters, who are relatable through their foibles. Shinji displays many anxieties and fears that are relatable, such as an unwillingness to put himself into danger and feelings of inadequacy. His relationship with his absentee father, who calls him back only because he needs him as a pilot is tough to watch, but creates a strong sense of empathy for him as we will him to find happiness. The character of Katsuragi, a hard-working and hard-drinking employee of NERV, is endlessly entertaining, both an incredible military commander, but also with a sense of fun. “Evangelion”, as the name perhaps implies, is a series that leans heavily on biblical allegory and references to Christian theology. The struggle of humanity against the angels can be seen as a struggle to liberate people from a dangerous ideology, or in a Nietzschean sense to exceed their current limitations. Characters not only face an external enemy, but an internal one and there is an argument that these may be one and the same. The appearance of Angel 4 at the time Shinji arrives on the scene suggests that the angel’s behaviour is in some way linked to that of the protagonists. “Evangelion” is a series that has so much to enjoy, whether it is the giant mech battles, the emotional and psychological complexity of the characters, or the philosophical ideas concerning the future of mankind. An absolute must-see for fans of thought-provoking science-fiction and beautifully scripted stories.