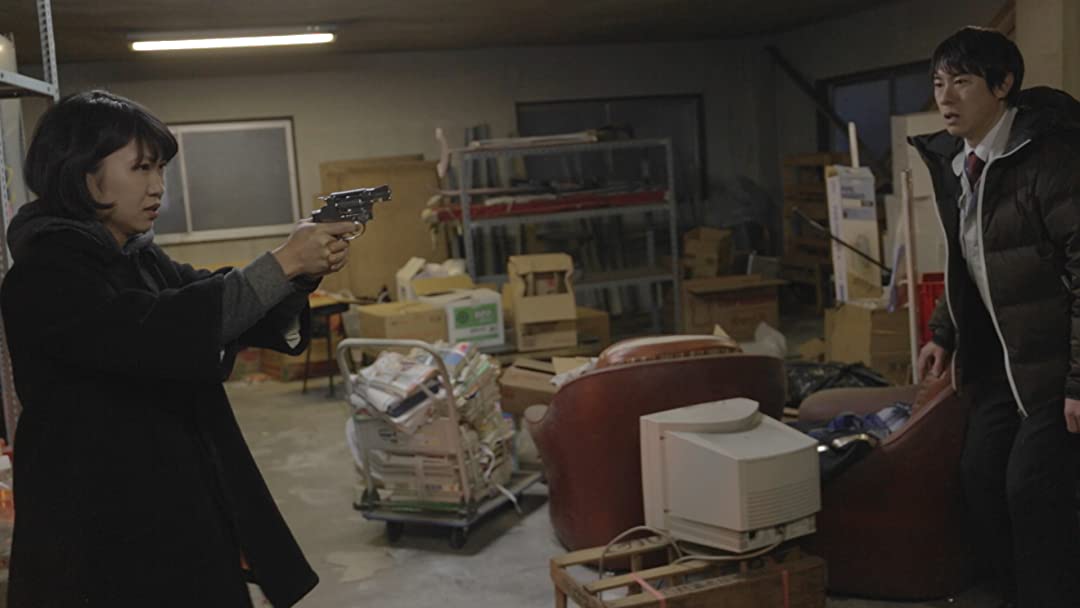 The film begins with a radio announcement stating that Kyoto has been hit with some form of attack in an ongoing unspecified war and the city is now quarantined. Soga (Kota Nakano) and Miyabe (Kosuke Komura), investigators from the health department, are searching for Eri Yamamoto, who has been missing since her last check-up three months ago. Her physician has no idea where she might be. It becomes clear that certain members of the population are suffering from a rare condition known as mad man disease, that leads to them harming others. The two detectives come across Eri’s sister Yui (Yui Mikami) and her boyfriend (Minoru Takanaka), who are feeding and taking care of the infected Eri (Miyuki Osaki) in their basement. They slowly close in on Eri’s whereabouts and condition, uncovering the mystery of her disappearance. Written and directed by Yuki Kuwazuru ((Not) Perfect Human), the film is an exploration of several themes concerning compassion for illness and mental health.

A bizarre art-house detective story with elements of body horror, “Yamamoto Eri Becomes Recoverability Zero” is a curious experience with a few unexpected scares. The plot is set-up very briefly and what follows is an exploration of some dark societal issues. In the dialogues between Soga and Miyabe we hear the various concerns of the general population around people with this unknown virus. Certain of the characters believe that the only way to deal with victims is by killing them. Soga goes armed to cases and is fully prepared to shoot them rather than risk being attacked himself, while Miyabe is more compassionate to sufferers. The performances of Kota Nakano and Kosuke Komura are good in the role of detectives, especially when they have scenes together discussing the ethics of their profession. Likewise, Yui Mikami and Minoru Takanaka make a good pair as they struggle with whether to help Eri or not. Mikami also has several flashback moments with Miyuki Osaki’s Eri where we get to see the two of them before the tragic events leading to the quarantining of certain individuals.

A low-budget is polished by creative direction, with plenty of hand-held camera work and scenes that have a fluidity and sense of purpose. The large number close-ups don’t always flatter the acting and there are a number of scenes that feel a little stretched, but a short runtime mean that there is not the central concept remains intriguing throughout. The story is chaptered and plays with its chronology by having each of the three chapters run as flashbacks leading up to the beginning of the preceding chapter. In this way we are brought into the investigation of Eri’s disappearance, through the horror of her condition, and finally onto an understanding of her tragic situation. Filmed largely in indoor locations gives the sense that the city’s population has significantly dwindled, but more could have been made of this in external scenes where we see a few people around in the streets. The film uses the distinction between quiet conversational scenes and sudden flashes of extreme body horror to great effect. One of these terrifying moments involves Yui’s boyfriend becoming completely traumatised after seeing Eri in the garage. She is completely ravaged by the disease and we realise why they are shunned. After Eri attacks him, Yui’s boyfriend stumbles into the street and appears to be in some sort of mania, perhaps representative of the madness that has spread from Eri to him, or perhaps his own paranoia at the thought of being infected.

This sequence leans into one of the central themes of the film: fear of infection. The cause of the mad man disease is never specified. It could be due to radiation from the bomb falling on Kyoto; it could be representative of Eri’s psychological trauma following her husband’s death; or it could be related to her pregnancy, which comes to play a central role later in the film. The characters appear to be terrified by the idea of catching mad man disease, and reticent to approach those with the condition. They go as far as suggesting that they should exterminate them. This is a dark reflection on humanity’s lack of sympathy with afflicted individuals; the shunning of those with mental and physical illnesses. We see the love of Yui for her sister, which leads to her overcoming this fear or disgust and taking care of her. The final moments of the film leave us with a stomach-churning moment that is sure to stick with the viewer, and leads to something of a re-examination of the earlier portion of the film. While shocking, the film is clearly intended as a metaphorical examination of cultural norms and the treatment of the sick. This final moment is perhaps intended to shock the audience into contemplating the various characters and situations and coming to some understanding of what is to be done if people are to move forward with more compassion.