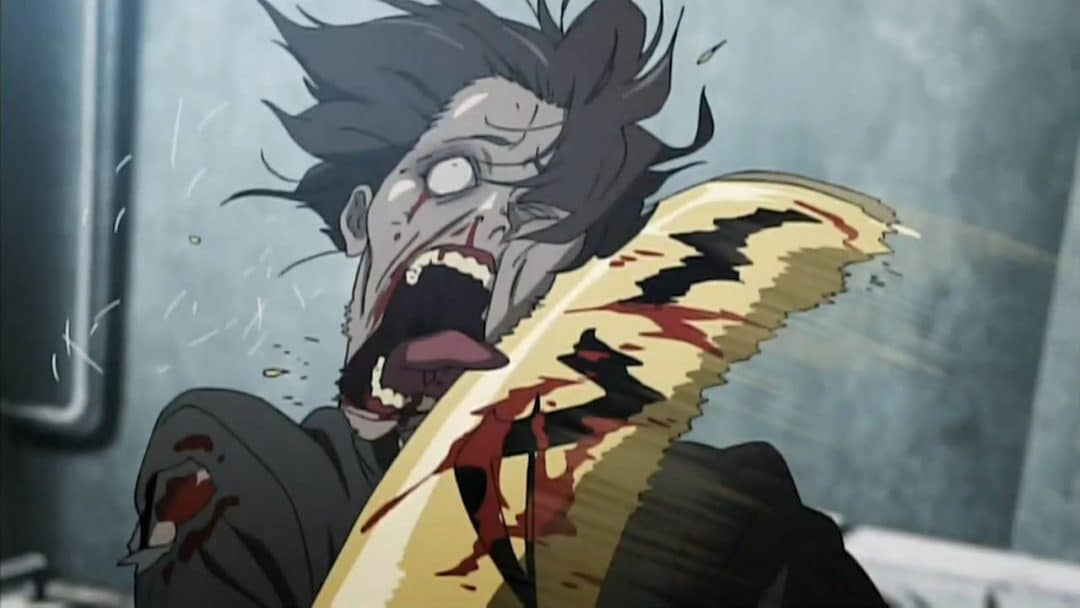 Following the outbreak of a zombie virus, high school student Takashi Komuro (Junichi Suwabe) is forced to fight against the hordes of the living dead. Joining him are fellow survivors including his former girlfriend Rei Miyamoto (Marina Inoue), an intelligent, rich-kid Saya Takagi (Eri Kitamura), martial arts expert Saeko Busujima (Miyuki Sawashiro), portly geek Kota Hirano (Nobuyuki Hiyama), and teacher Shizuka Marikawa (Yukari Fukui). The group must work together, putting aside any former differences to escape from the school and find their way in this post-zombie apocalypse.

“Highschool of the Dead” is based on the manga by Daisuke Sato with illustration by Shoji Sato. Sato’s previous work was mainly self-published and this was his first non-“adult” project. The show borrows heavily from the exploitation genre, with graphic violence, blood splattering everywhere as they take out zombies in often darkly-humorous ways. The female protagonists are all endowed with improbably large bosoms and the camera rarely misses an opportunity for a shot of jiggling breasts or exposed panties. The male characters, Takashi and Kota, who presumably act as the surrogates for the intended audience, find themselves in the unusual position of being at once surrounded by beautiful young women, and simultaneously threatened with a gory death at the hands of rampaging zombies. There are serious tonal shifts throughout from horror to comedy, and it often has the feel of a show entirely put together by people who had no higher objective than to bring to the screen exactly what their audience would want to see. Although there are any number of zombie shows, this one does keep things fresh and fast-paced, with constant changes of environment and new challenges for the group. The introduction half-way through the series of a young girl and a dog to the group further alters the dynamic. The animation utilises several techniques, with comic inserts, frenetic CG enhanced action sequences, and the art-work on the zombies is especially good. The rock soundtrack keeps up the energy, and I enjoyed that the credits for each episode are accompanied by a different track.

A simple zombie survival tale that will appeal to anyone who is a fan of sexploitation cinema and gory horror. At times the show rises above the ridiculous and there are some moving sequences when it seems that the enormity of their situation finally catches up with the characters, but these are usually followed by more outrageous action or sex-jokes to lighten the mood. I would highly recommend it as one of the standout examples of the genre, with excellent animation work and character design and a story that keep throwing up unique and exciting scenarios.