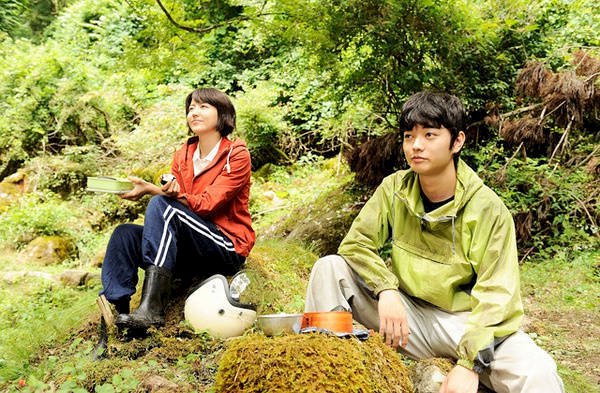 When Yuki Hirano (Shota Sometani) fails his university entrance exams he finds himself at a loss. Not able to follow his classmates to further education, he is dealt a further blow when his girlfriend tells him they should split up. While out drinking with friends he sees a leaflet advertising a one year project to work in forestry. Enamoured by the beautiful young woman on the leaflet he sets out for the countryside where he learns all about this new trade under the stern guidance of Yoki (Hideaki Ito). He is then assigned to the remote village of Kamusari, where he is pleased to find the woman from the leaflet Naoki (Masami Nagasawa) is also living. Yuki attempts to ingratiate himself with the villagers, learning about rural life and the woods, in hopes of connecting with Naoki. Naoki however, having been disappointed by another trainee, is reluctant to fall for Yuki.

“Wood Job!” is based on the novel by Shion Miura. Written and directed by Shinobu Yaguchi (Swing Girls, Robo-G) it is very much part of his oeuvre of lighthearted comedies. With a romantic plot and plenty of gentle humour it is an easy watch. Most of the laughs come from Yuki’s attempts to learn about forestry, including tying knots, using a chainsaw, and not shouting “Timber!” when the trees fall. When he finally makes it to Kamusari we are treated to scenes of him balking at their local food and drink (road-kill deer and alcohol with a dead snake in) and customs. There is a comfortable familiarity to the plot and it delivers exactly what you expect from early on at every turn. That is not to say it is not enjoyable. The film builds on a sense of relaxation that is in keeping with the themes, which are all about the quiet, nature-focussed rural life, as opposed to the rat-race of the city. The charismatic cast exude bonhomie and their affable and affectionate relationships are entirely believable. Shota Sometani is likeable as the inept and naïve city kid, completely out of his depth, but with a bottomless passion and determination to battle on. Masami Nagasawa provides the perfect foil as the cool and confident school-teacher Naoki, whose worries about her future are always bubbling below the surface of her genial disposition. Hideaki Ito also delivers a great comic turn as Yuki’s superior Yoki, at first displeased by what he sees as Yuki’s incompetence, but slowly won over by his resolve. The film was shot on location in Mie prefecture and features stunning shots of the forested mountains. The direction distinguishes between the city and the countryside in an interesting way, using a frenetic fixed camera on Yuki in the overwhelming and chaotic city and large panoramic takes in the countryside, firmly differentiating the hectic streets from the quiet charm of the mountains.

The traditions of rural communities are a fascinating insight into human civilisation and can offer a window into what has been lost by the move to increasingly large metropolitan areas. The nature of forestry work demands a close connection with and understanding of the natural world, and “Wood Job!” reflects on this in various conversations between the characters. Whether that is the idea that nature deserves respect, or the deep understanding of ones place in history through the cycles of harvesting and planting. Yuki is a character who is completely lost, having fallen off the expected path from high-school to university to work. His move to the countryside provides him with a chance to examine what is important in life. The pace of life, the simplicity born of a lack of distractions, the focus on community and tradition, all of these things change his perspective. In the end, Yuki’s journey speaks to everyone who is trapped in the largely meaningless and monotonous faux-reality of modernity. It is a call for a return to nature, to ideals of family, community, and enjoying the good things in life.