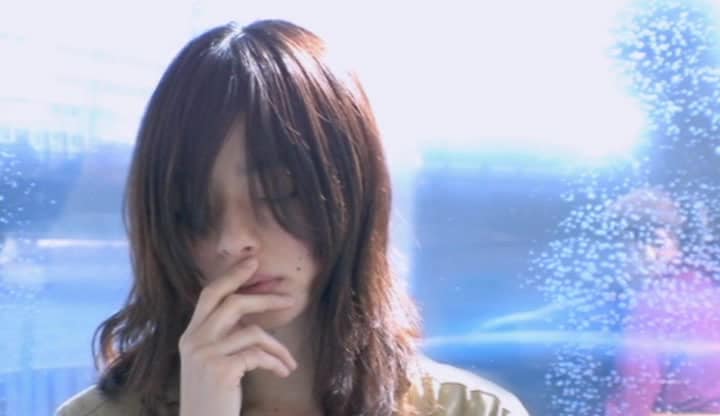 The film begins with abstract images of golden triangles intercut with scenes of a bustling city as we hear a soundtrack of resonant and meditative bells. Narration then tells us that this story is based on the experiences of the director’s ex-girlfriend. We see a young woman crossing the Shibuya scramble junction outside the station. She is then sitting beside a window as she recounts recent troubles she is having distinguishing reality from fiction. The man she is talking to seems unsympathetic, telling her to find a job so she is distracted from her psychological issues. We then find that this is actually a scene from a film that is being shot, which the young woman wrote. She tells the director that she doesn’t feel it is really conveying what she wants to. He is also less than helpful, reminding her that they already spent a lot of money and that due to her past actions it is difficult for her to get films funded. On her way home she stops by a travel agent and while looking into the window a mysterious young woman appears at her shoulder. She returns to her untidy apartment and pours herself a large drink. We then see her wandering through a series of beautiful vistas in this location, eventually meeting the young woman from the city on the beach.

Written and directed by Sogo Ishii, “Mirrored Mind” is based on a short. The film does feel stretched, even at an hour in length, with relatively little going on. Instead the film luxuriates in its hypnotic imagery and dream-like visuals. The soundtrack of discordant bells has something of a religious aura, reverberating with strangely eerie tones. The sound design also fades down background noise at times to highlight a sense of disconnect from the city and other people. The story does have a twist at the end which is well set-up and paid off although there is a lot to sit through before getting to this moment. The acting by Miwako Ichikawa in the lead role is exceptional, really capturing the character of a woman who is lost and suffering from stress, loneliness and an inability to realise her own will.

More of an art-house experiment than a movie, focussing heavily on the psychology of the protagonist. The film uses sound and imagery to tell its story. Vast ocean vistas are shown as a symbol of the ineffable, the eternal and incomprehensible other that humanity seems doomed to search for without ever finding it. The film also subtly intimates ideas of a separation between the machine and the natural world. The scenes of the city are contrasted starkly with those of the peaceful natural otherworld that our protagonist escapes to. The end of the film suggests that a connection with nature is important to humans and something that many are missing. The film’s central philosophy, reflected in the title, is that the world is a mirror of internal psychology. An interesting concept and one that again the film allows the audience to make up their own minds about. “Mirrored Mind” is a ponderous affair but nevertheless with some stunning cinematography and sound design. If you are looking for something soothingly contemplative to watch then it is worth checking out.