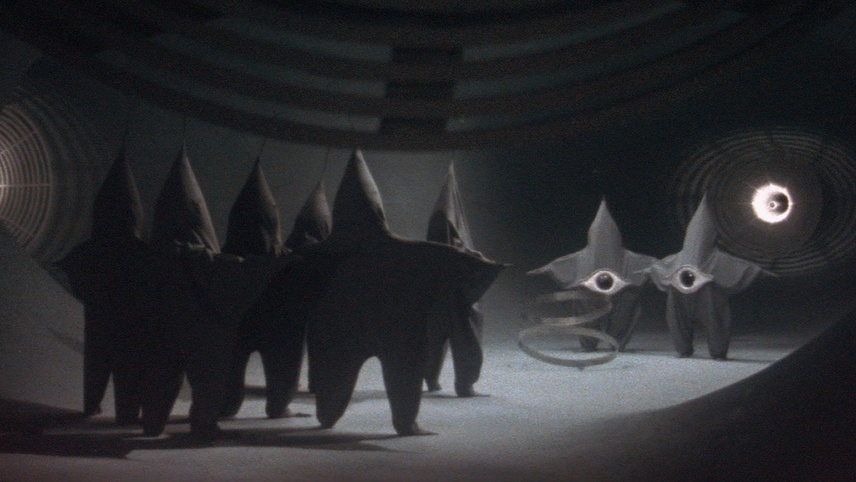 A group of scientists work to avert a world-ending catastrophe in this atomic age science-fiction drama. When an observatory sees a peculiar light out in space, followed by electrical outages and sightings of strange star-shaped cyclopean beings, scientists Kamura (Bontaro Miake), Isobe (Keizo Kawasaki), and Matsuda (Isao Yamagata), begin investigating. These aliens, known as Pairans, have come to warn the earth of impending disaster in the shape of a large asteroid on collision course. Realising their appearance is discomfitting to the humans, they take on human forms, including that of a popular singer Hikari Aozora (Toyomi Karita).

Directed by Koji Shima, with a screenplay by Hideo Oguni, from the novel by Gentaro Nakajima, “Warning from Space” is an entertaining film, with a simple plot that nevertheless provides its share of great moments. The appearance of the aliens is slightly ridiculous (though of course there’s no way of knowing what alien visitors would look like). The ability to transmutate into humans means that there is relatively little screen time in their natural state. Most of the narrative revolves around the scientists and their attempts to first understand what is happening and second to come up with a solution. The film builds it’s sense of impending doom, coming to a thrilling conclusion with panicked citizens fleeing disaster. There is also a lot of comedy, perhaps recognizant of the film’s slightly far-fetched story, mostly revolving around the alien disguised as Hikari Aozora and her incredible, inhuman, feats of dexterity, speed and strength.

While the premise is fantastical, the story of “Warning from Space” is deeply human and speaks to widespread societal fears. The film evokes the fear of nuclear catastrophe and the memory of the recent atomic bombings. Characters using geiger counters to detect the aliens, and the initial plan to use the remaining stock of nuclear warheads on earth to destroy the oncoming catastrophe. The detonation of the first atomic bombs began a new age, putting humanity beyond a point of no return, with the capability of eradicating all life on earth now clearly demonstrated. It is this fear that the film speaks to, with the scientists stating their concerns about nuclear warheads, and the development of an even more terrifying weapon by Matsuda. The film balances these fears with a hope that such technology can be used for good, with discussions of nuclear power being a potential boon for humanity. The film’s science-positive message is also evident in the internationalism that it promotes. While the 20th century produced it’s share of horrors it also led to greater globalisation and an understanding amongst many nations that co-operation was preferable to conflict. We see this in the scientists contact with fellow observatories, hinting at the unifying power of science in the wake of a devastating global catastrophe. An enjoyable early science-fiction film that plays on many familiar themes, with a positive pro-peace message of internationalism and scientific co-operation.