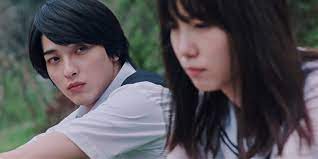 Former schoolfriends Nanakusa (Ryusei Yokohama) and Yu Manabe (Marie Iitoyo) find themselves reunited on a mysterious island, not sure how they got there. The island is for people who have been thrown away and the only way to leave is by finding the thing they have lost. This curious mantra is all the inhabitants understand of their bizarre liminal world. The island is perfectly normal in most respects, with everyday services in operation: a school for the students; dormitories for housekeepers. There is even a postal system. Certain fantastical elements include an eternal staircase which supposedly leads to a witch on the mountain who is able to answer any question. Unlike the others who are happy to remain there, Yu wants to leave the island and soon recruits her fellow students in a plan to escape.

“Inakunare, Gunjo” (English: “Go Away, Ultramarine”), written by Minato Takano, from a novel by Yutaka Kono, and directed by Akina Yanagi, offers an interesting twist on the standard high-school romance drama. The mystery of the island is intriguing, inviting speculation as to why these people are there and whether and how escape might be possible. The complete normality of their surroundings gives things a familiar feel despite the odd situation, a subtly disturbing undertone to the typical high-school setting. The story is chaptered, layering the mystery with each new twist, as they try to uncover the nature of the island. The secret is resolved towards the end in an unambiguous but suitably ambivalent way, offering a complete explanation but one which some may find unsatisfactory. The film occasionally seems trapped by its high-school romance plot and fails to develop the more interesting concepts suggested by its premise. The films location offers the perfect backdrop, a quaint seaside town with the endless stretch of ocean nearby isolating the characters in this small community, while showing the unreachable horizons, and ragged natural beauty that surrounds them. The actors all do a good job with their characters, leads Ryusei Yokohama and Marie Iitoyo have good chemistry and their relationship is relatable.

The central mystery of this film is well disguised and I would suggest watching the film before reading this to avoid spoilers. We discover at the end of the film that the island is not inhabited by real people, but instead by the parts of people’s personalities they have thrown away. With a change in circumstances, maturing, or willfully, people may discard parts of themselves they no longer need. This fascinating psychological idea, of an island inhabited by the unwanted psychological baggage of individuals, is not developed to its full potential in the film. Confusing the issue further it is hard to see exactly what is wrong with most people on the island, making you wonder why this would be the part of their personality they would abandon. The film is engaging as a romantic drama, but it would have been interesting to see these deeper psychological themes developed. Well worth a watch if you are looking for something a little different.