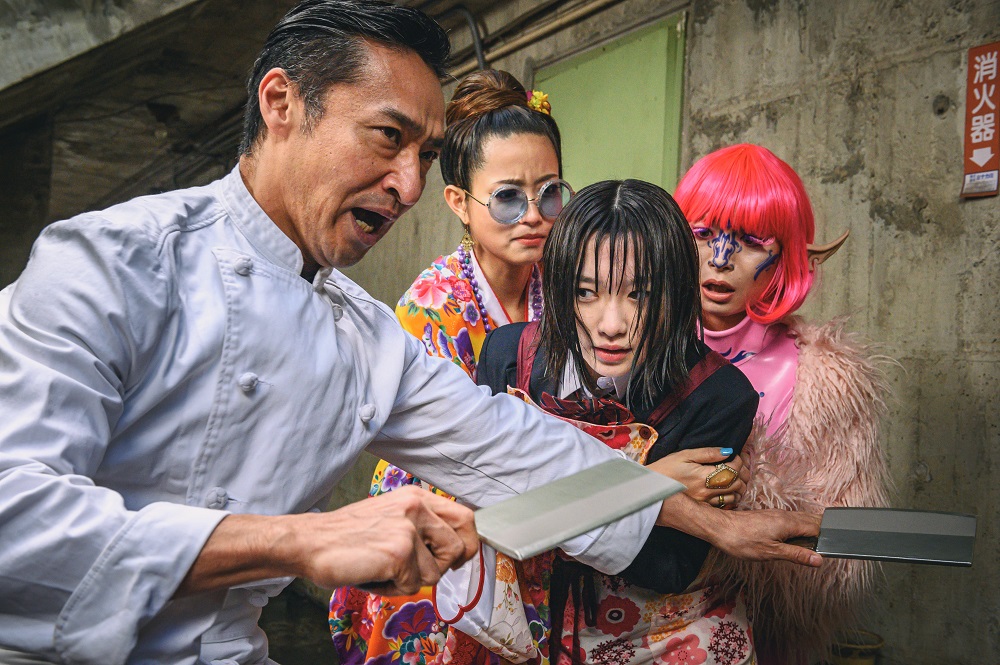 Two former Yakuza start a new life opening a ramen restaurant in this lighthearted musical comedy about the joy of food. Recently released from jail, Tatsu (Yoshiyuki Yamaguchi) is met at the gate by his former associate Ryu (Yasukaze Motomiya), who tells him their crime family was wiped out by a mysterious figure with a ‘third eye’ named Gizuma. Ryu is now working in a mobile drinks stand and suggests the two of them start a Chinese restaurant. Old rivalries soon resurface when fellow Yakuza, the Ozawa brothers Kazu (Kazuyoshi Ozawa) and Jin (Hitoshi Ozawa) start their own ramen stand over the street. The two restaurants, one helped by ramen-loving schoolgirl Kokoro (Rinne Yoshida) and fortune teller Rio; the other by extraterrestrial-like insatiable YouTuber Mimi (Saiko Yatsuhashi), find common cause when the Yakuza-hating Gizuma appears on the scene intending to destroy both.

“Tokyo Dragon Chef” is a divergence from writer-director Yoshihiro Nishimura’s previous films, foregoing the gory obscenity that he is best known for (in films such as “Tokyo Gore Police” and “Meatball Machine”). Here we have a fun premise, with these charismatic gangsters-made-good, that provides for plenty of laughs in the ageing Yakuza getting riled up over ramen dishes, using their rough personas to succeed in this somewhat less violent industry. The cast are enjoyable and clearly having a lot of fun with their over-the-top credibility-stretching characters. The pop soundtrack, with music by Kotaro Nakagawa, keeps things upbeat and there are some enjoyable musical numbers that give the film a whimsical feel. The Tokyo of the film is one where the line between fantasy and reality is blurred, with rather far-fetched backstories, and characters who are straight from the pages of a cartoon or comic book. A lot of the comedy is character based, helped by the superb performances from the whole cast, with the Yakuza’s tough-guy images juxtaposed against their new roles as ramen chefs and waiters, or Mimi’s bizarre behaviour scoffing down bowl after bowl of ramen. The numerous shots of food, preparation and eating, will make you salivate with the delicious looking platters.

The film’s comedy is underscored by a heart-warming message about the power of food and the hope of redemption. The former Yakuza find a new passion in ramen, putting their energies into creating the best dishes, their conflicts now being resolved peacefully with noodles rather than knives. Both Tatsu and Kazu are given brief backstories about their childhood memories of their mothers, closely tied to gastronomic reminiscences, that give us an insight into the calming power of food. There is also a commentary on social media influencers and the way such communication can bring people together. In contrast to the sense of friendship and community engendered by the ramen restaurants, uniting people through love of food and company, Gizuma appears is a young man entirely fixated on the pursuit of wealth. The wearing of masks shaped as a single-eye perhaps speaks to this narrow-sighted approach to life, one that values money over fun and friendship. A slight yet enjoyable film and an interesting entry in Nishimura’s filmography.