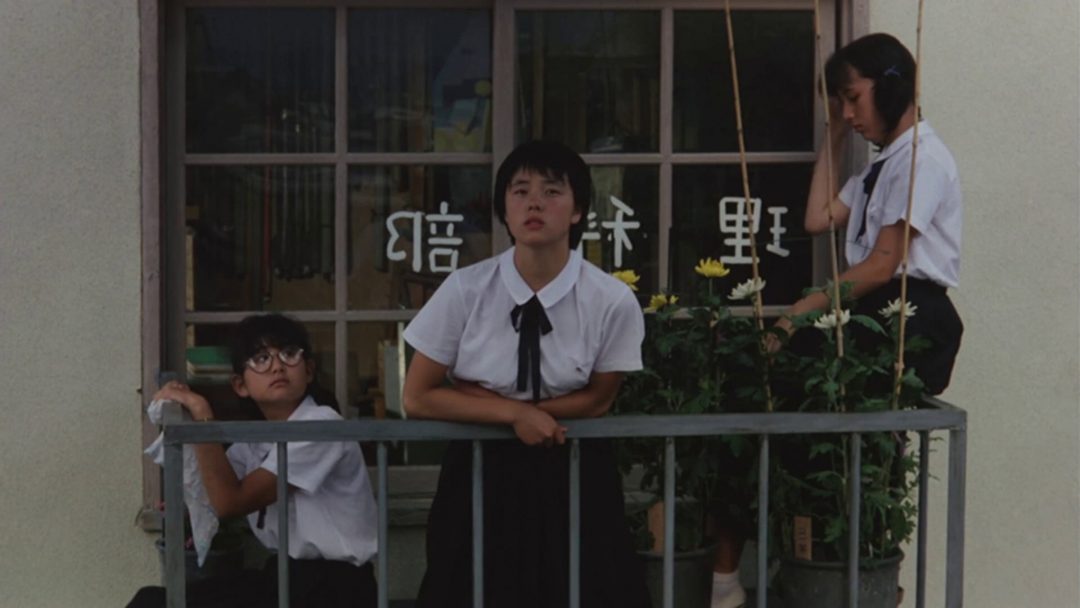 A group of teenagers are trapped at their rural school during a typhoon in this adolescent drama. Girlfriends Yasuko and Yumi; their friends Midori and Michiko (Yuka Onishi), a serious student who has a soft spot for classmate Mikami (Yuichi Mikami); and Mikami’s friends Ken (Shigeru Benibayashi) and Akira (Yoshiyuki Matsunaga) all come-of-age in one way or another through their experiences. We also follow Rie (Yuki Kudo) who flees to the city to escape the storm and is approached by an older student named Kobayashi (Toshinori Omi). Alongside the children, the film also focusses on their long-suffering teacher Umemiya (Tomokazu Miura) who has his own relationship troubles.

“Typhoon Club”, written by Yuji Kato and directed by Shinji Somai, is an acutely observed teen drama, capturing the uncertainty and energy of the high-schoolers, while also addressing serious themes affecting them. The voyeuristic framing, as we watch conversations through windows or open doorways, draws us into their inner world, and the script captures the playful air of teenage friends, or their meandering conversations. The pop and reggae score by Shigeaki Saegusa also helps emphasise a sense of youthful joie de vivre. The young cast all give believable performances and work well together. You can feel the tension between the boys and girls, and the affection between the friends. Without a single plot, the film’s strength is in its characters and letting them evolve through the situation they find themselves in. Nothing feels forced in the script and their relationships are all naturalistic. Lesbian romances, sexual harrasment, and bullying, all feature, but the film always feels genuine and never exploitative.

When the storm arrives we are treated to incredible effects of howling wind and lashing rain that capture the awesome power of such events and the somewhat surreal atmosphere accompanying them, that sense that the world is in complete turmoil. The majority of the film is taken up in simple conversations between the chracters, but they are always entertaining to watch. The film also features some interesting surreal elements, such as the two people playing the ocarina in the early morning city streets following the storm. Introduced and left without much commentary it subtly pushes the sense that the storm has a semi-mythical significance, beyond simple meteorlogical phenomenon. That it is some sort of rite of passage for the children, an awesome natural force that they must overcome to realise their potential.

“Typhoon Club” is an exploration of what it is like to be on the cusp of adulthood, with the students’ sexual awakening coming alongside the overwhelming realisation that childhood is ending and they are staring down the barrel of a long life and eventual death. This theme of mortality is raised in the shape of Yasuko who discusses her grandmother’s illness. The idea of taking on responsibilities is expressed through Umemiya, the teacher, who still seems to behave like a child, struggling to accept that he must now grow up. The storm comes to represent this hormonal cyclone, both isolating the characters, particularly in the case of Rie; being a dangerous, unpredictable and uncontrollable force; and yet also something liberating. When the children run outside in their underwear, there is a sense that they are completely free. They have given themselves over completely to the whims of fate and the elements that surround them rather than sheltering from them. In the film’s most clear reference to a philosophy, the characters discuss the possibility of people transcending their own species through death. Through the storm they appear to reach this transcendence, the suspension of the natural order allowing them to shrug off their inhibitions and simply exist, free of terrestrial concerns. Late in the film there is a suicide involving one of the characters that comes slightly out of the blue, although it does tie in to these themes of mortality and transcendence. The film also features a scene of attempted rape, or sexual assault, which may also be hard to swallow. “Typhoon Club” gives us an unvarnished depiction of puberty, drawing in elements that often function both literally and allegorically, with the external storm coming to symbolise the characters fears and struggles. An entertaining and thought-provoking film on what it means to grow up.