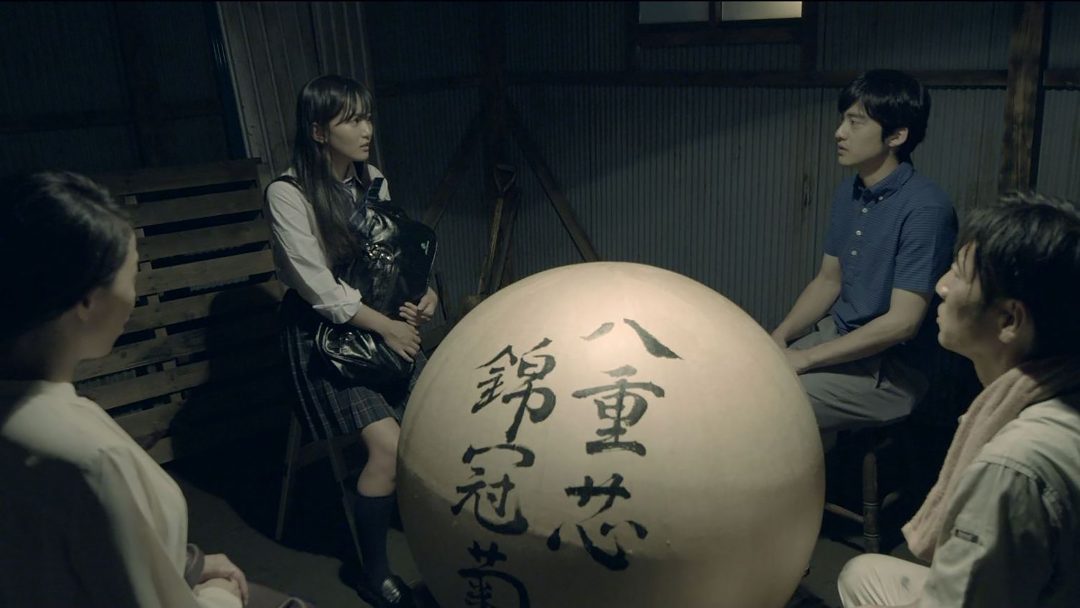 Four individuals learn about one another’s lives when they gather to commit joint suicide. Happa (Kanji Tsuda) has created a 3-foot sphere packed with fireworks with which to carry out their plans. He is joined in a small shed by a young man named Baby Doll (Minehiro Kinomoto), each of them having chosen an alias on the online forum where they met. The two men are subsequently joined by Tsubasa (Shinobu Tsuji), and finally by high-schooler Tsukiko (Honoka Murakami). However, Tsukiko’s arrival makes the others uneasy, feeling she is too young to commit suicide. They attempt to talk her out of it. Through their conversations with each other we learn what led them to this point.

There is a major twist in this film that completely changes both the tone, and perhaps even the genre. If you want to avoid spoilers, then I suggest you check out the film before reading further. The majority of the story is focussed on these four individuals in a single location, relying on an excellent script with everything from black comedy to heart-wrenchingly emotional moments. By treating the subject of suicide somewhat lightly, the more emotional scenes pack more of a punch, the darkness of their individual struggles made more poignant by the lighthearted banter they engage in. The characterisation of the four protagonists is well-done, fleshing out particular archetypes through solid writing an excellent performances. Happa is a typical goofy father, making inappropriate jokes and trying to keep people’s spirits up. Baby Doll/Takamura is a downtrodden, nervous, young man, suffering work-related stress. Tsubasa’s story is perhaps one of the most tragic, and Honoko Murakami brings real passion to the role of Tsukiko’s shy schoolgirl dealing with bullying. As mentioned previously, the film begins as a low-key drama, simple setting, small cast, but following the first explosion, when the characters are transported back to relive the same events over, it strays into science-fiction. It is an interesting way of having the characters truly battle with the morality or necessity of suicide, in a way that would not be possible if they simply succeeded in their first attempt.

The subject of suicide is never an easy one. The film allows us to see some of the reasons why people are driven to suicide and to sympathise with the protagonists. Through seeing things from the perspective of others they are able to better understand their situation and discover a different path. The final message, that people can solve issues such as anxiety and depression through talking out their problems, may seem quaint, but is nevertheless important. A unique film with a determined focus on its theme and characters, that delivers a number of surprises and some excellent performances.