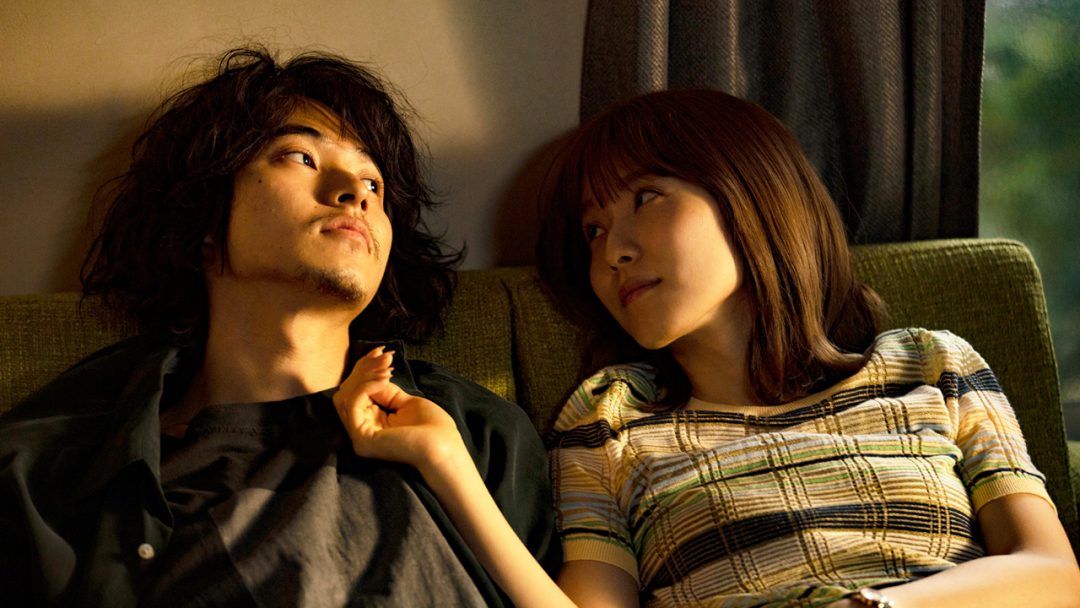 Following a chance meeting on the street and a brief romance, impoverished playwright Nagata (Kento Yamazaki) and Saki (Mayu Matsuoka) move in together. Their relationship is far from easy though. Nagata is writing for a theatre troupe called “Oroka” which he established with his school friend Nohara (Kanichiro Sato), but his lack of success leads the group to slowly fall apart. Saki does her best to encourage him, but his difficult personality, driven by his anxiety and ego, lead to arguments between the two.

Written by Ryuta Horai and directed by Isao Yukisada, “Theatre: A Love Story” is a poignant look at a troubled relationship. Over the course of the film we witness Nagata and Saki as they attempt to work out their differences and support one another in their own ways. The script gives us numerous moments that reflect those parts of romantic relationships that often go unrepresented on film. Awkward silences, arguments about nothing much at all, the inexpressible joy of simply being together, or moments of silliness that help to build that indefinable bond. It is touching to hear Nagata talk of the warmth he feels simply hearing Saki laugh; and Saki’s clear devotion to her boyfriend. The well-observed script is brought to life by an excellent cast. Kento Yamazaki and Mayu Matsuoka create a believable couple, perfect in their imperfections. Yamazaki’s Nagata is a brooding, frustrated young man who takes out his anxieties and feelings of inadequacy on Saki, while Matsuoka’s Saki is both endlessly charming, funny and charismatic, yet harbouring deep dissatisfaction with her own life and Nagata, supporting him despite her misgivings. The supporting cast, including Kanichiro Sato as Nagata’s urbane friend, and Sairi Ito as Aoyama, a former member of Nagata’s acting troupe who goes on to find success as a theatre critic, further underscoring his own lack of achievement, all do an incredible job with the naturalistic style of dialogue. Throughout there are hints to the theatrical, in Nagata’s narration of his life and relationship, his inner thoughts constantly chewing over his insecurities. There are also poetic monologues, such as when he is taking Saki home on his bike, vocalising his feelings for her. The wistful score and direction sweep us along on the journey with these two lovers, whose relationship can often seem incomprehensible given their difference in personality: Saki is outgoing and fun, while Nagata seems often miserable and misanthropic.

“Theatre: A Love Story” is a film about a man who is struggling with various insecurities. He lashes out at those around him, variously criticising other playwrights, refusing to go to Disneyland as he believes he can’t enjoy other people’s creations, and refusing to let Saki enjoy other people’s work. His controlling, often petulant behaviour, masks a deep-seated fear of rejection and his neuroses about his own ability. Jealousy over more successful writers lead to him being angry or upset at Saki without really knowing why. All of these facets of human psychology and relationships are insightfully written and portrayed in the film. Nagata is far from a likeable character, but as things progress we come to an understanding of his behaviour. Saki on the other hand indulges Nagata’s worst impulses, giving him exactly what he wants, attention and praise, but not what he needs, a cool appreciation of his abilities and his flaws. A beautifully wrought relationship drama that deftly depicts the various complexities of human emotions and a poignant portrait of a man dealing with his own sense of inadequacy.