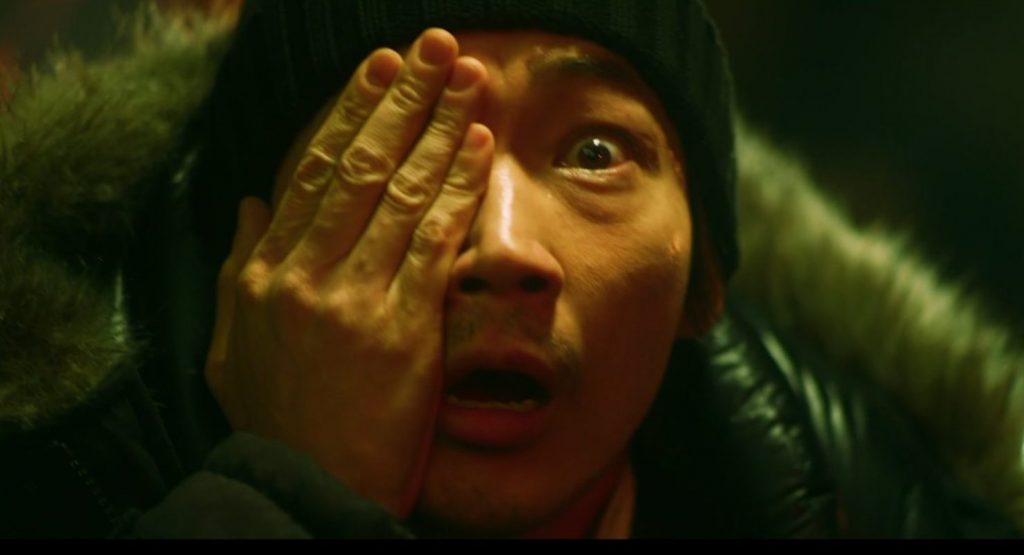 Susumu Nakoshi (Go Ayano) is suffering from amnesia, homeless and living out of his car, when a strange man named Ito Manabu Ito (Ryo Narita) taps on his window. Ito asks Nakoshi for seven days in which to change his life and give him something to live for. Nakoshi goes along with Ito, who tells him his plan to conduct an experiment: to drill a small hole in the front of his skull and see if he experiences any supernatural abilities. Nakoshi agrees to the trepanation and soon finds himself able to see the inner form of people, their deepest traumas. These take the form of a homunculus, which can appear in any shape relative to the trauma the person has experienced, from bizarre monster-lie figures, to more abstract manifestations. Nakoshi sets out with his newfound ability and manages to help some individuals, but things take a dark turn when he is forced to confront a trauma from his own past.

“Homunculus” is based on a manga by Hideo Yamamoto (Ichi the Killer) and directed by Takashi Shimizu (Reincarnation). A dark fantasy, toying with elements of psychological horror and traditional monsters in the form of the homunculus, it is an intriguing premise and the scenes where Nakoshi wanders the streets of Kabukicho seeing the various representations of inner turmoil, with some very inventive designs, is fun to watch. It would have been great to delve into more character’s psyches, but with the constraints of a film’s running time we are limited to only a handful of problems for Nakoshi to solve. The special effects on the homunculi are mostly good, showcasing a variety of creative designs. The homunculus comprised entirely of an ever shifting torrent of jewellery charms was particularly unique. The film touches on a number of dark issues, in particular violence and sexual violence. It is a film that also has a number of uncomfortable moments that will no doubt spark debate or contemplation, mostly concerning the schoolgirl character, where the film leaves perhaps a little too much unsaid about the intended message. The acting by Ayano and Narita is exceptional, giving themselves over to the weirdness of the premise and making it as believable as it can be. Shimizu’s stylish modern direction, using text message overlays for example, brings us right into the story in  visually interesting way.

The film offers a unique look at psychological trauma, by turning it into something tangible in order to tackle it. We see that behaviours are conditioned by past actions and how these inner sufferings are often hidden from the rest of the world. While it deals with difficult subjects of mental health, sexual abuse, violence, neglect, suicide, miscarriage, death, and other issues, it smuggles these things in to a story that on the surface is a straightforward supernatural mystery. The blend of supernatural and psychological is an interesting one, drawing comparisons between ancient belief systems of spirits and modern science around neuropathy. The film touches also on ideas of ethics in science. A fun adventure drawing on mythology and psychology to deliver a fascinating look at the inner-workings of the human mind.