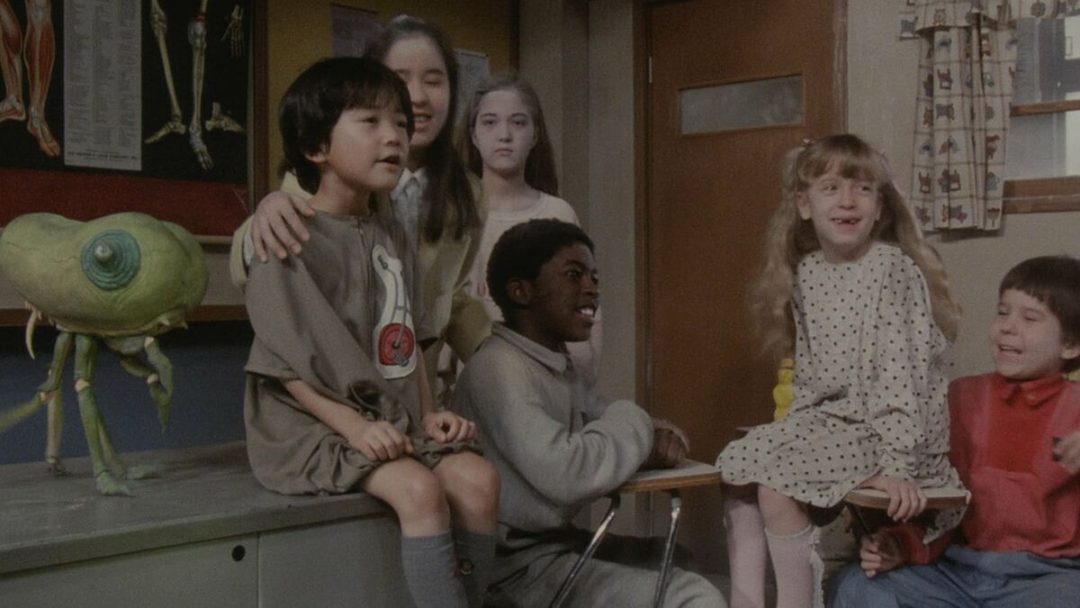 The Drifting Classroom (1987) by Nobuhiko Obayashi

Based on the horror manga by Kazuo Umezu, “The Drifting Classroom” follows a group of International School students in Kobe after their classroom is lost in a time-slip. Shou (Yasufumi Hayashi) leaves home after arguing with his mother, heading out to school where he meets up with his other classmates. Not long into the school day the building begins to shake. At first believing it is an earthquake, the teachers and children try to remain calm as they assess the damage. However, looking out of the window they see that they are in a mysterious desert-like world. They are later threatened by aliens attacking the school. They must learn to adapt and survive in this hostile new environment, while back in Kobe the people speculate about the sudden disappearance of the school.

“The Drifting Classroom” is a chaotic, action-packed, children’s adventure film with dark undertones. It shifts rapidly from a spirit of light-hearted comedy as the children explore this new world, their familiar surroundings made unfamiliar as they are now filled with sand, and terrifying horror as giant insect-like aliens arrive to terrorize them. The film mixes in other elements such as survival drama as they elect a leader and try to work out how to live on the supplies available in the school. The young cast do a great job, bringing a youthful exuberance to their roles. The primary characters are Shou, Mark (Thomas Sutton), Ayumi (Aiko Asano) and the youngest Yu, but the supporting cast do a fantastic job in creating a sense of barely controlled chaos, such as you might expect in a school full of children in such circumstances. Obayashi’s direction is suited to this bizarre blend of science-fiction, horror, and adventure, with the sympathetic camera moving wildly in concert with the cast. The ambitious story, involving time-slips, other worlds, and aliens, is achieved with a blend of CG special effects, green screen, and stop motion creature work. It is a story full of twists that is endlessly entertaining.

While the premise of the film, a school caught in a timeslip, seems like it would lend itself to a relatively slight fantasy drama, there is a dark subtext to “The Drifting Classroom” that sets it above a simple throwaway adventure tale.

If you wish to avoid spoilers, please check out the film before reading further.

Part way through the film, Shou finds a memorial in the desert with the names of all the teachers and pupils he is stranded with. Other hints in the film, such as a character telling Shou’s mother that “children always go to the future”, and the slow pull out shot at the end of the film, indicate that in fact these children are marooned on a hostile post-apocalyptic earth, devastated possibly by nuclear war (an earlier scene sees one adult shouting “they finally pushed the button”). The film doesn’t shy away from death, with many students perishing due to a lack of food, and the aforementioned memorial. It confronts it’s audience, primarily children, with these harsh realities about life. The filling of the school with sand is an incredible visual metaphor for the timeslip they have gone through. They are literally trapped in the sands of time, left abandoned by previous generations thoughtless or reckless actions. Though there is hope at the end of the film, it is slight, with the children abandoned to their fate on this inhospitable planet, presumably ruined by those that came before. The ecological, anti-nuclear message is never made explicitly, but it is clearly there. A fantastical adventure with a troubling message about the world we leave to future generations.