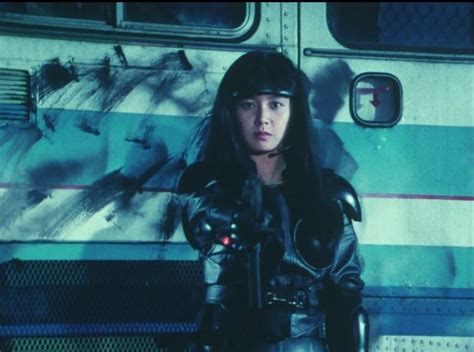 After a meteor lands in Tokyo Bay, the chemical reaction causes parts of the population to turn into zombies. A blockade is placed round the area and the ground defence force take control of the city. While they scramble to create an antidote, Keiko (Cutie Suzuki), the daughter of an army colonel, is brought in to help rescue any survivors. She later comes face to face with the Fujioka (Kenji Otsuki), the leader of the ground defence force, and his sinister plans.

Written by Hitoshi Matsuyama and directed by Kazuo Komizu, “Battle Girl” is classic B-movie fare, with an outlandish premise and predictable plot that serves only to move the characters from one action scene to another. The film is self-aware enough to realise its inherent silliness, often leaning into it, for example having Keiko lift a man by the neck upside down, or a zombie that is diced up into pieces. Cutie Suzuki, a pro-wrestler before starring in this film, has a great presence, clearly familiar with portraying a tough character. It is perhaps surprising that the use of her skills as a fighter is quite limited, with only a few moments showing off wrestling moves. For the most part she is a generic action heroine. Despite the predictable plot, the film throws in enough elements to keep things engaging, such as the ‘Battle Kids’, a group of young survivors who have teamed up to try and escape the city, and the ‘Monsters’, a group of thugs charged with preventing Keiko discovering Fujioka’s secrets. The action scenes are engaging, again benefitting from having a wrestler in the lead role, and the decapitations, explosions, and gun fights ensure there is rarely a dull moment. There are a few laughably poor special effects, understandable given the small budget, using obvious dummies; but for the most part the gore is good. Where the film does excel is in creating an eerie post-apocalyptic environment, with sparsely furnished industrial settings giving a sense of desolation and decay. The ambient score likewise emphasises this threat-laden atmosphere. There are a couple of strong visuals and scenes in the film too, particularly when Keiko confronts a group of zombies, and the plot builds to two fantastic large scale sequences of zombie assaults on the survivors.

On the whole, “Battle Girl” is a fun, fast-paced, action-horror, with an entertaining turn from star Cutie Suzuki. The themes of corrupt officials and military personnel, the dangers of radiation and scientific arrogance are familiar to the genre and the plot will not surprise fans of this type of story. However, there is some genuine artistry here in the stylish direction, soundscape and set design that make it worth a watch.