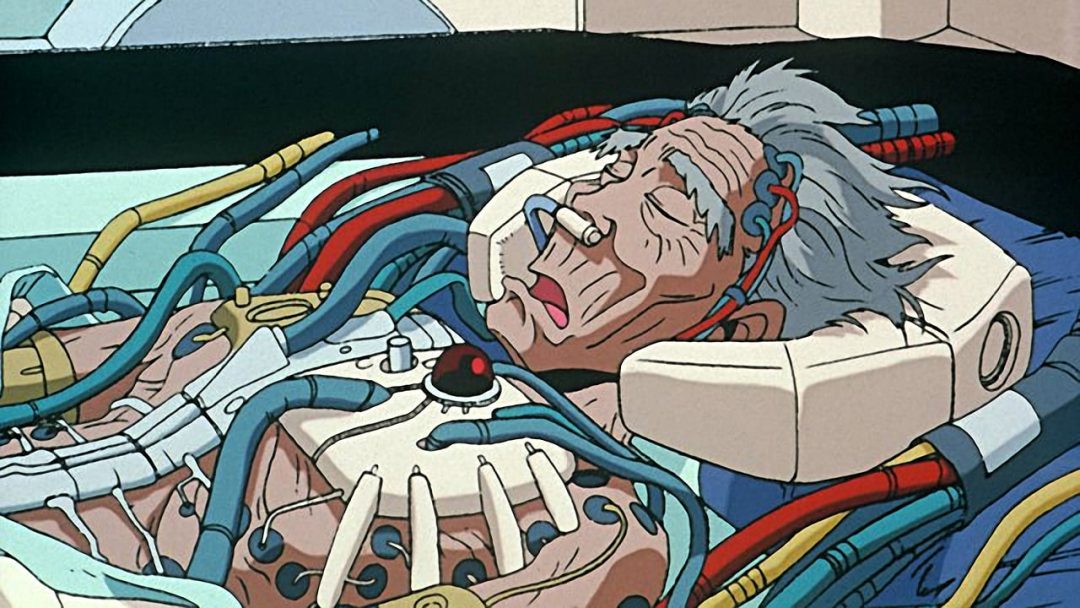 Haruko is a student nurse working as a carer for the elderly, bed-bound and incontinent Takazawa. The government department in charge of looking after the aged members of society has developed a new machine, the Z-001, which it promises will revolutionise the care profession. The machine is a giant bed that includes television, telephone, games, and will wash, feed and clean the patient. It even has a special vacuum for dealing with toileting. The government remove Takazawa from his home and place him inside the prototype machine to test and promote its effectiveness. Haruko sets out with her friends to rescue Takazawa from the government’s clutches. However, things soon spiral out of control when the machine develops unknown capabilities.

“Roujin Z” was written by Katsuhiro Otomo (Akira) and shows many similarities with the director’s other works. This includes concepts of transhumanism, human-machine interfacing, and corrupt government departments that do not have the citizens best interests at heart. Director Hiroyuki Katakubo who worked with Otomo on Akira does a great job with the mix of tones in “Roujin Z”. The film leans heavily on the comedy and jokes, particularly early on, which helps get the audience onboard with the somewhat out-there premise. There is also a lot of action and the breakneck pace leaves little time for reflection. Once the plot kicks into gear there is barely time to consider as it moves from one action sequence to another, with helicopter chases and robot fights. Haruko is a sympathetic protagonist, the personification of the kindness and hardwork of the medical profession. The artwork and style includes some excellent backgrounds, packed with details and the robots are well-designed, stretching the concept of a sentient robotic bed to its limits.

This film is packed with ideas about the future of the medical profession, the problems associated with technological progress, the corruption inherent in corporations and the military. Haruko’s job is threatened by the emergence of this new technology, and the film raises concerns about what society loses by relying heavily on computers or robots, positing that such progress may lead to a diminishment of compassion and human contact. The treatment of the elderly is at the heart of the drama. Although there is comedy to be gained from Takazawa being tossed around by the robot, the complete lack of care shown to him by the head of the department for welfare shows a dark side to how society sidelines their elderly. There are more far reaching concepts such as how humanity is increasingly becoming tied up with technology. Takazawa becomes able to converse through the machine and likewise people are able to hack into this system. An excellent science-fiction film that touches on many important ideas concerning the future of humanity, with an action-packed script and lots of humour.