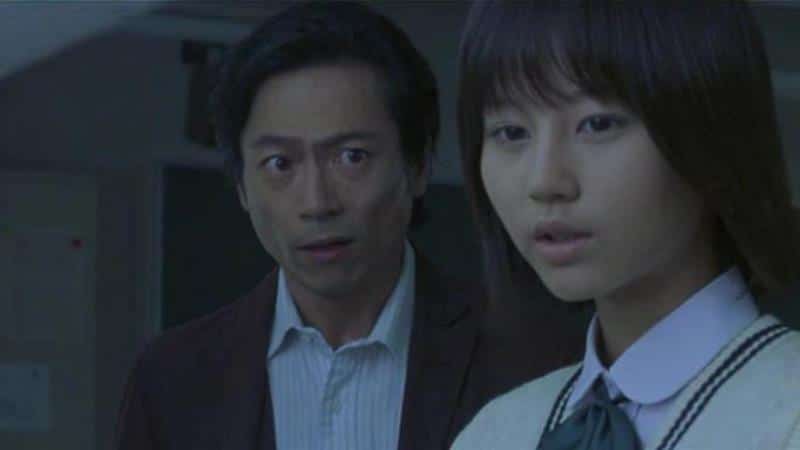 Hideki Satomi on the way back from a family trip with his wife, Ayaka, and daughter, Nana, stops to make a call at a payphone on a rural road. He catches sight of a burnt shred of newspaper with an article that seems to predict the imminent death of his daughter. Turning around he is too late to help as a truck, the driver having suffered a seizure, plows into his car which then sets on fire. Three years later, Hideki and his wife have separated. He is still working as a teacher, unable to forgive himself for not saving his daughter. His wife is exploring the phenomenon of premonitions, hoping to find some evidence of her ex-husbands experience.

Written and directed by Norio Tsurata and loosely based on the comic book “Newspaper of Terror” by Jiro Tsunoda, “Premonition” is a straightforward horror that shies away from its most interesting elements. Hiroshi Mikami gives a great performance as a grieving father still struggling to come to terms with what has happened. He hates newspapers, lives a solitary existence, and cannot cope with the trauma of his experience. In contrast, his wife (played by Noriko Sakai) is working to uncover the truth of what happened. The film has its share of spooky moments, however some of the tension is taken away by creating a sense of inevitability. It is hard to feel invested when the premise is that these events cannot be avoided. The strongest section of the film comes in the final third, where it shifts to a psychological horror mode and we have a look at the impact of events on Hideki’s life. This shows a creativity that is lacking in the early sections.

Clairvoyants are a staple of horror, creating instant tension with the inevitable deaths they foresee. However, this comes at the cost of losing a sense of interest. The audience is simply forced to watch what is happening. In taking power from the characters, it also removes the natural empathy we might feel towards the characters. In part this could be put down to personal beliefs. The film’s stronger themes relate to Hideki’s feelings of guilt over his daughters death and sense of impotence to help in tragic circumstances. The film’s ending does do something interesting with the genre, that goes some way towards ameliorating the weaknesses in plot earlier. However, it also throws up a major problem in rewriting much of what has happened. Overall, “Premonition” is a missed opportunity, that could have been much bolder in its ideas and focussed more on the characters than the mystery.