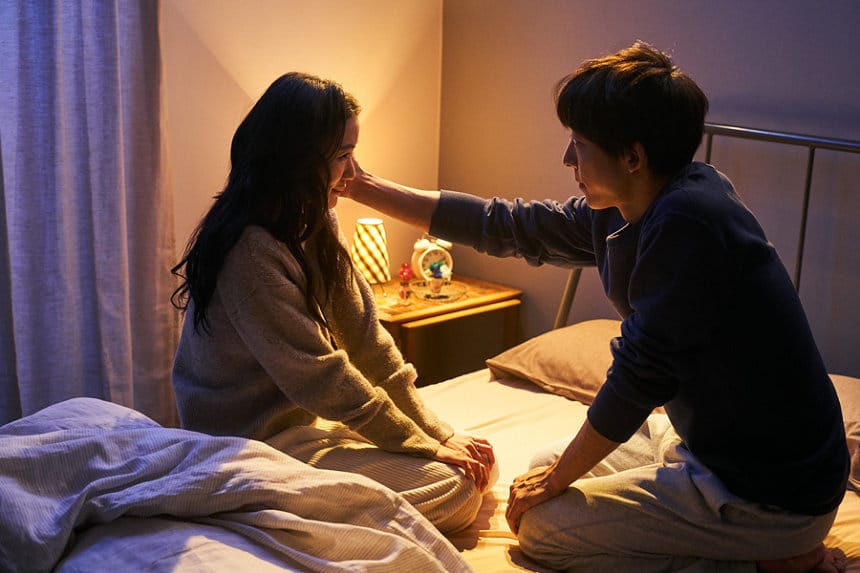 Art graduate Tetsuo (Issei Takahashi) turns up at a warehouse on the recommendation of a friend. He soon discovers the job he has been set-up with is designing and manufacturing sex dolls along with senior designer Kinji (Kitaro), nicknamed Kin-Kin. He sets about his task diligently, but his first creation is deemed inadequate by their boss as it is too unrealistic. Kinji comes up with a plan: they will advertise for a female breast model by pretending that they are making prostheses for medical use. When Sonoko (Yu Aoi) turns up to model, Tetsuo falls in love with her and the two are soon married. Tetsuo finds he is unable to tell her about his real profession and Sonoko has a difficult secret of her own to share with him.

Writer and director Yuki Tanada has worked on a number of romantic comedy films and her familiarity with the genre shines through in this well-balanced relationship drama. “Romance Doll” is paced perfectly and uses gentle humour to introduce the characters. It eschews crude gags but the early scenes as Tetsuo is introduced to his new job are entertaining in the casual way they treat the subject matter of love dolls and the respect Kin-Kin has for his work, seeing his role as something akin to a sculptor of great art. The relationship between Tetsuo and Sonoko is tender and relatable, both uneasy at first and likeable but not without their flaws. Issei Takahashi as Tetsuo begins as an archetypical awkward young singleton, but develops into a more rounded character through his relationship with Sonoko. Yu Aoi (who also featured in Tanada’s “One Million Yen Girl”) delivers an incredible performance, hugely charismatic and  capturing both the strength and fragility of the character. The supporting cast all do an excellent job, but the film keeps a firm focus on the two leads. The direction is great throughout, with excellent use of framing and blocking, particularly in the scenes between Tetsuo and Sonoko. The dinner table is almost transformed into an interrogation room as their relationship hits several bumps in the road. There are also carefully considered cutaways that say a lot very succinctly. One such example is the still shot of two coffee cups, still part full, resting on the table following an argument, that perfectly encapsulates a sense of things left unsaid and the comfortable fantasy of the perfect relationship being brought to a sudden halt.

In many ways a straightforward tragic-romance plot, the inclusion of Tetsuo’s peculiar line of work helps give the film a quite unique feel. Alongside themes of relationship troubles, honesty and questions of fidelity, there is also an important idea brought to the fore. That of the distinction and relationship between sex and love. The film rarely sexualises Tetsuo’s work and the dolls are only ever seen as objects, quite distinct from Sonoko who displays a warmth and tenderness. As the title suggests, the idea of a “love doll” (as they are called in the film), or more accurately a “sex doll” would be quite distinct from a “Romance Doll”, which suggests a deeper connection and one that is born of struggle and genuine understanding for another person. The film is well made and brings out incredible performances from the two leads. It’s gentle blend of humour, romantic drama, and philosophizing on the nature of love make it a hugely enjoyable watch.