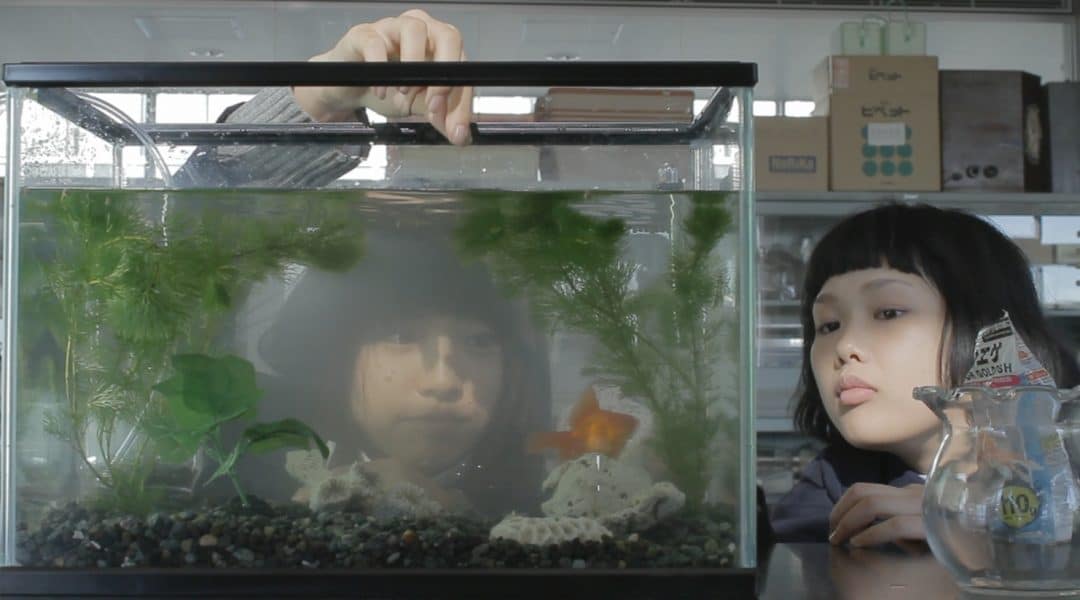 Misa (Aya Banjo) is a loner at her high-school, bullied because of her looks and given the nickname Pooh (after Winnie the Pooh), her only solace is in the biology club of which she is the sole member and where she looks after a goldfish called Kintaro. That is until Izumi (Izumi Okamura) comes into her life. Izumi seems so unlike Misa, being cute and outgoing, but she is also alienated from the class, as the other popular girls are jealous of her looks. The two form a firm friendship built on their outsider status. The mystery of their missing classmate, Aya (Ayumi Seko), who along with Marina (Reo Saionji) is one of the class bullies, looms large as Misa and Izumi become more closely connected and things take a horrifying turn as Misa realises her new friend may be hiding a dark secret.

Writer-director Ryohei Watanabe’s debut feature, “Shady” is a taut thriller that builds tension throughout. It is a story that builds on strong characters and the everyday anxieties and paranoias of high-schoolers, expertly weaving in darker threads. Aya Banjo gives an incredible performance as Misa, shy and awkward yet with a resilience earned through years of torment. We are drawn into her world, her suffering, and her joy at finding a friend and her insecurities are always bubbling just below the surface. Izumi Okamura is also exceptional in her role, a bold and brash teenager but with a chip on her shoulder at how she is ostracized from her classmates. Izumi undergoes a transformation as the film progresses and we see character traits develop from troubling to terrifying. This is the first acting role for both; Aya Banjo is best known as a singer (under the name Minpi*b) and Izumi Okamura was working as a model when cast. The director picked both for their look and wrote characters that closely resembled his image of them. Their chemistry is believable and their conversations capture perfectly a tentative high-school friendship. The direction works well for the film and shows off the best of the actresses. What begins as a high-school friendship drama soon turns into a psychological thriller and the angled camera and use of long uncomfortable takes helps draw out the unpleasant yet inescapable nature of the situations Misa finds herself in. The film touches on a number of themes, many that are not explicitly stated but glint out in moments of ambiguity. One such scene is when Izumi paints Misa’s toenails, an act of girlish bonding that is given almost erotic overtones as Izumi slips beneath the covers and Misa moans as she blows softly on her feet. As with much of the horror in the film suggestion proves to be more powerful than straightforward attempts to shock.

“Shady” builds on many thriller themes and plot points, with its strength being in the two fantastic lead performances that draw you in emotionally before introducing the darker tone of the latter scenes. It is a film about friendship, loneliness, loyalty and bullying among other things. The relationship between the two girls is conventional in many ways, thrown together by chance despite their differences, and the two actresses do a great job in creating a sense of normality while hinting at something more worrying. The film takes what are everyday fears or emotions and turns them into something darker. The final third of the film is packed with several twists and moments that make you reconsider what you have seen previously. The girl’s feelings of rejection, acceptance, anger, helplessness, are all expertly portrayed and help create rounded characters. A subtly affecting thriller about teenage anxiety and the joys and dangers of friendship.