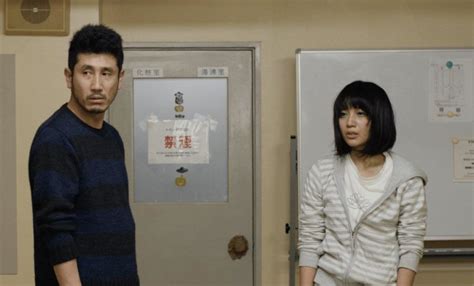 Tetsuo (Kiyohiko Shibukawa) is an amateur film director. After having a small independent hit a few years before, he has decided to make this his career despite making almost no money and having little recognition. Instead, he uses his limited fame, and his acting school, to attract vulnerable women who are desperate to be cast in his films. His life is a string of cigarettes and loveless sex. A talented screenwriter named Ken (Shugo Oshinari), with dreams of big-screen success, comes to him with a script that Tetsuo is sure will provide the basis for the film that will finally see him leave his underdog existence behind. After charging him 20,000 yen for the privilege of joining his film group, Tetsuo agrees to work with him. At the same time, a naive young woman named Minami (Maya Okano) turns up at Tetsuo’s acting class to audition for him. The washed-up director, far from nurturing this young talent, attempts to take advantage of her. Minami refuses his advances, stating she is in love with Ken. Eventually, Minami manages to escape this band of struggling artists and become a successful actor (albeit by sleeping with a more famous director), leaving Tetsuo and Ken behind. The film is populated with a huge cast of enjoyable characters, such as Tetsuo’s sister Akina (Nanami Kawakami), the talentless actress Kyoko (Chika Uchida) who resorts to sleeping with directors to get roles; a successful director named Kano (Kanji Furutachi) who we learn is no less perverse and immoral than Tetsuo; Mamoru (Yoshida Hosoda), a friend of Tetsuo who makes a living selling low-budget softcore porn; and the stingy producer Kida (DenDen) who keeps recommending they add nudity to their films to make them sell.

Written and directed by Eiji Uchida, “Lowlife Love” features some stunning performances and a heady blend of love, sex and a blackly humorous commentary on the world of film-makers. Tetsuo is hardly a likeable protagonist, however relatable or sympathetic he may be in his attempts to make it as a director, as we see him sleeping around, taking advantage of people constantly, and lacking motivation. However, it is precisely this complexity that makes the film so irresistible, like a horrific car-crash that you can’t look away from, despite how traumatic it might be to witness the endless failures of this man, both in life and as a filmmaker, or the way that Minami is treated. None of the characters are particularly good or bad, they are just doing what it takes to survive in this harsh world. There is a sequence late in the film, when Minami, who has gone from powerless to completely in control breaks down in tears as she realises what she has become. You can feel her sense of frustration and upset at the complicity in the harsh system that this entails. In this heartbreaking scene we run the full gamut of emotions from lust, to anger, and despondency. Kiyohiko Shibukawa’s disreputable Tetsuo is an immoral womanizer, but we are swept along with his constantly frustrated attempts to make something of himself. Maya Okano gives a truly spellbinding performance as Minami, at first naive but gaining in confidence as she realises her own ability. The supporting cast all give great comedic performances as the seedy, disreputable sorts that seem to be commonplace in this industry. The cinematography by Kenji Noguchi is great throughout, with a few stylistic flourishes that show that unlike the protagonists they are depicting the makers of this film are at the top of their game.

Writer and director, Eiji Uchida, has created a complex tale of imperfect humans struggling with what they are doing with their lives. The emphasis on sex throughout the film is not incidental. It is these primal biological urges that seem to be the only constant driver of the characters’ behaviour. Early in the film a character comments that Tetsuo does nothing but sleep around and as the film progresses it asks the difficult question of whether there is really any more to life than that, whether all life is simply a hedonistic free-for-all, or if people are driven by more than sexual desire. It is made clear that sexual attraction, lust and jealousy are inextricably linked with people’s behaviours and even their success or failure. This is made clear in the characters of Tetsuo and Kano, who seem different only because of their varying degree of success as a filmmaker, while we discover they are both equally perverse and self-absorbed. The film also provides a stark commentary on the manipulation and exploitation, particularly of women, that seems to be prevalent in the film industry. When DenDen says there is no difference between pornography and other films, his words might be more true than he realises, as we see women treated merely as objects to satisfy men, lacking any agency of their own. Even Minami’s own success is dependent on her lowering herself to being used by directors.

In contrast to the almost relentless negative portrayal of the film industry, and perhaps the “Love” the title is referring to, we have filmmaking itself. It seems the only thing that Tetsuo is genuinely passionate about, and perhaps speaks to the ideal that through cinema and the arts we can attain something more real than reality, both an escape and at the same time an absolute truth. Film is the thing that keeps him going, despite his failures, it symbolises something that is human and at the same time beyond the seedy, everyday humanity we are forced to endure. Of course, the film’s ironic take on the industry often undermines this naïve belief, but nevertheless there is something pure in even the most despicable characters. In the end, the fact that they hold on to these dreams, of being a movie star, or creating a popular film, is what makes them poignant, believable and sympathetic.