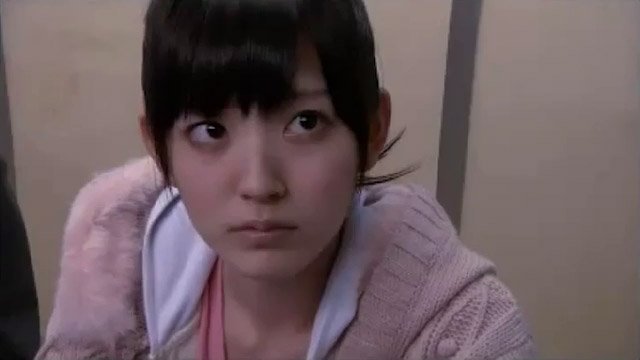 A deadly mobile phone dating game begins to claim the lives of players and other victims in this follow up to Keitai Kareshi. The mysterious game from the “i-Scream” company appears on young men’s phones. They must text a digital young woman (Seika Taketomi) and keep her happy in order to increase the “Love Gauge”. The final command of Erika (the young woman in the game) is to kill, which they happily oblige before dying themselves, while those who fail the game die immediately. Meanwhile, Takashi (Toru Baba) is searching for his young sister who he believes is the spirit trapped in the game. He comes across another high-school girl, also called Erika (Airi Suzuki), who it seems has a special connection with his sister, as this other Erika is troubled by visions of a brutal murder.

The film is written by Yoichi Minamikawa and director Mari Asato. With its risible plot and melodramatic acting, “Keitai Kanojo” is unlikely to thrill hardcore horror fans. The best moments in the film concern the two Erika’s psychological connection, using simple effects such as rapidly fading light and shifting locations to create a sense of subtle threat. The film opens with a man completing “Keitai Kanojo” by murdering an unsuspecting stranger, but this is something that the film moves away from as it progresses to focus more on the supernatural elements. It finds itself not really working as a psychological horror or a gory thriller as for the most part there is scant build-up to what is happening, as if the film itself is racing through plot points to reach the conclusion. There is little creativity in the murders and the deaths caused by the game itself involve the person simply collapsing with a groan.

The idea of mixing the supernatural with modern technology is common in contemporary horror (Ring, One Missed Call) and the film’s premise is not unpromising. The idea of addiction to mobile phones, gaming and social media, and how this might drive individuals to violence by warping their sense of value is one that the film could have explored, but spends little time on. Similarly, there is potential for the film to delve into the social isolation engendered by this technology with the men choosing to play this virtual girlfriend game rather than engaging with real women. It is a shame because these would have been more interesting aspects to explore than the ideas of a cursed phone that the film spends the majority of its time on.