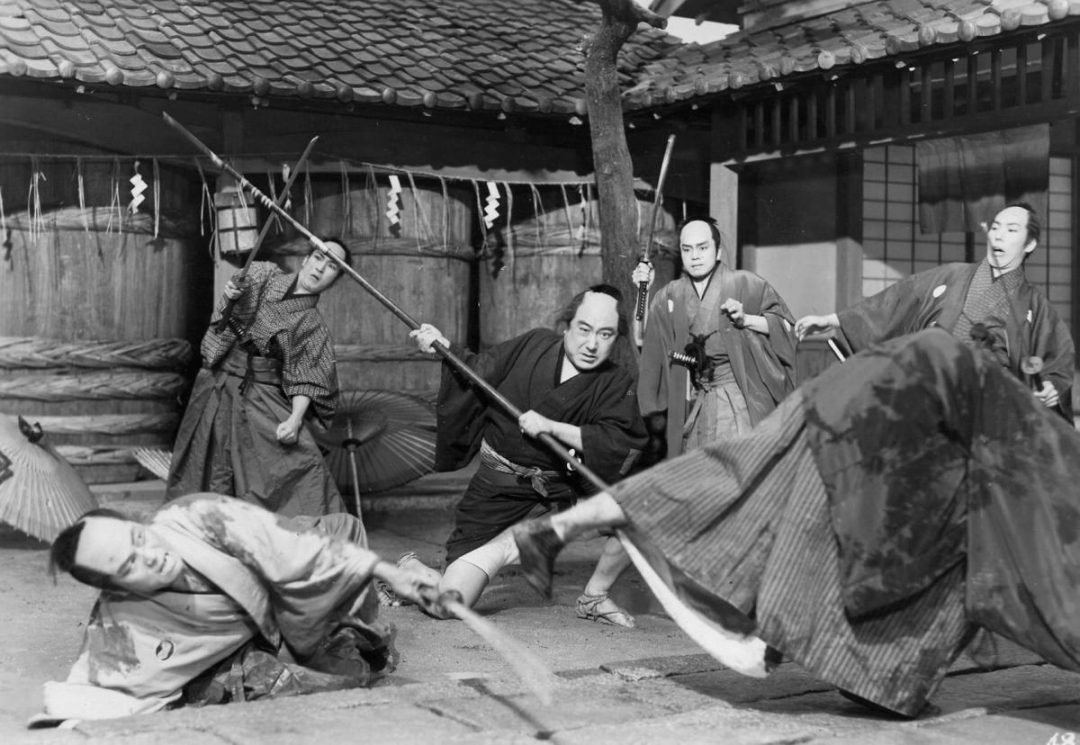 Genpachi (Chiezo Kataoka) and Genta (Daisuke Kato) are retainers to samurai Sakawa Kojuro (Teruo Shimada), on their way to Edo. Along the road they meet various fellow travellers. A young boy interested in becoming a spear-carrier like Genpachi, a shamisen player (Chizuru Kitagawa) and her daughter, a policeman on the trail of a thief, among others. The fates of everyone on the road become intertwined with both humorous and tragic results.

“Bloody Spear at Mount Fuji” is directed by Tomu Uchida from a script by Shintaro Mimura and Fuji Yahiro. It is an interesting story with both comedic elements and more serious social themes explored through the various characters. The humour may be a little outdated and slapstick but the two servants Genpachi and Genta are likeable and relatable enough, carrying the burden of supporting their master on his journey. In the later half of the film the tone shifts and is much more downbeat and pessimistic. The cinematography is well-done and in particular the staging and framing of every shot shows a masterful understanding of technique, utilising theatrical staging with more modern techniques such as overhead shots.

The film has a strong social message regarding the class system that is as strikingly relevant today as it was at the time of release, and even during the period when the film is set. Our attention is drawn early to the various professions of the travellers on the road, in particular the difference between the status of Genpachi and Genta and their master Kojuro. The turning point of the film comes when Kojuro receives the praise for the actions of Genpachi and we realise that respect is something that is inherited rather than earned. The film augments this central theme with the characters of the mother whose daughter is to be sold into prostitution. Also, with the arrogance of the samurai whom Kojuro meets later in the film. It is a passionate appeal that a person’s worth not be judged by their social standing, but by their actions. At the end of the film, Genpachi warns the boy not to become a spear-carrier. This may be a plea to the audience that they should never be bound by the disputes of others, or a more pessimistic acknowledgement of an unavoidable fate. One of the characters earlier in the film makes reference to the fact they everyone has a master, “But who is the lord’s master?” he asks. A deity? Are we doomed from birth to walk a particular path. And does it always end in violence?