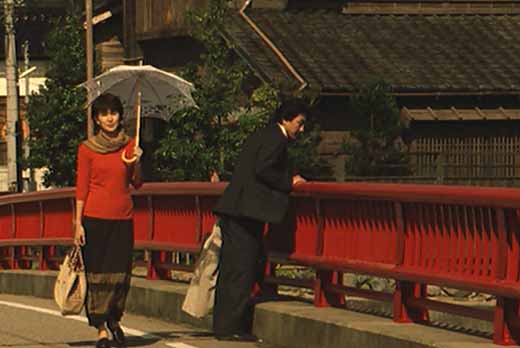 Warm Water Under a Red Bridge (2001) by Shohei Imamura

Koji Yakusho stars as Yosuke Sasano, a man who has recently lost his job at a large company. After speaking to a homeless man, he learns of a treasure that was left behind when the man left another town some years before. The treasure is to be found in a house by a red bridge. Yosuke sets off to find the treasure for the man, being told that if he finds it he can sell it and keep the profits (the man only wants to know what happened to the treasure). When he arrives, he meets Saeko Aizawa, played by Misa Shimizu. The woman suffers from a peculiar condition which means that she feels herself filling with water. The only way to alleviate her discomfort is by shoplifting, or having sex, which causes the water to leak or gush out of her like a geyser. Soon Yosuke’s mission to find the treasure is forgotten as he becomes enamoured of Saeko, deciding to remain in the town, beginning a new life with her, and taking up a role aboard a fishing vessel.

Shohei Imamura won plaudits for his film “The Eel”, and “Warm Water under a Red Bridge” sees the writer-director again ploughing his own unique furrow. The film is a curious mix, with mystery, romantic drama and sex comedy thrown in. This sense of wrong-footing the audience pervades everything, and you are never sure whether you are watching farce or philosophy. Koji Yakusho and Misa Shimizu navigate their way through the genres, crafting believable characters in unbelievable situations. The film centres on sex and is humorously explicit while never being obscene in its depiction. The fountains of water spraying everywhere comically undercut the drama and create a sense of joy through humour that captures the emotion of love in a way that few films manage. Other characters, the three fishermen at the bridge, the marathon runner, and Koji’s workmates help to fill out a world that seems to be full of quirky individuals. The musical accompaniment by Shinichiro Ikebe is full of odd percussion and synthesisers, slipping from unnerving as Koji explores the unusual town, to comical as he gets entangled in ever more bizarre situations.

Trying to understand “Warm Water under a Red Bridge” is quite a challenge. It is a film that subverts expectations again and again, drifting from serious to ridiculous (often in the space of a single scene). It is a film that discusses the relationship between lust, sex and love. Yosuke is a man who is smitten with Saeko. Their passionate relationship is built around the sex, but the film asks what lies beneath this and what love is. Yosuke is also given good advice by his friend who tells him to stop overthinking things and to basically do whatever makes you feel good. This idea of seeking after personal satisfaction is one that pervades the film. Saeko is likewise a woman who is struggling to satiate her desires, and fills the emotional emptiness by stealing. The marathon runner, the fishermen, everyone is either waiting for something, searching or working towards some goal that is of the utmost importance to them. Yosuke is at first on the hunt for money, treasure, financial reward, and his journey of self-discovery is one that will lead him to the answer of what he is truly searching for.