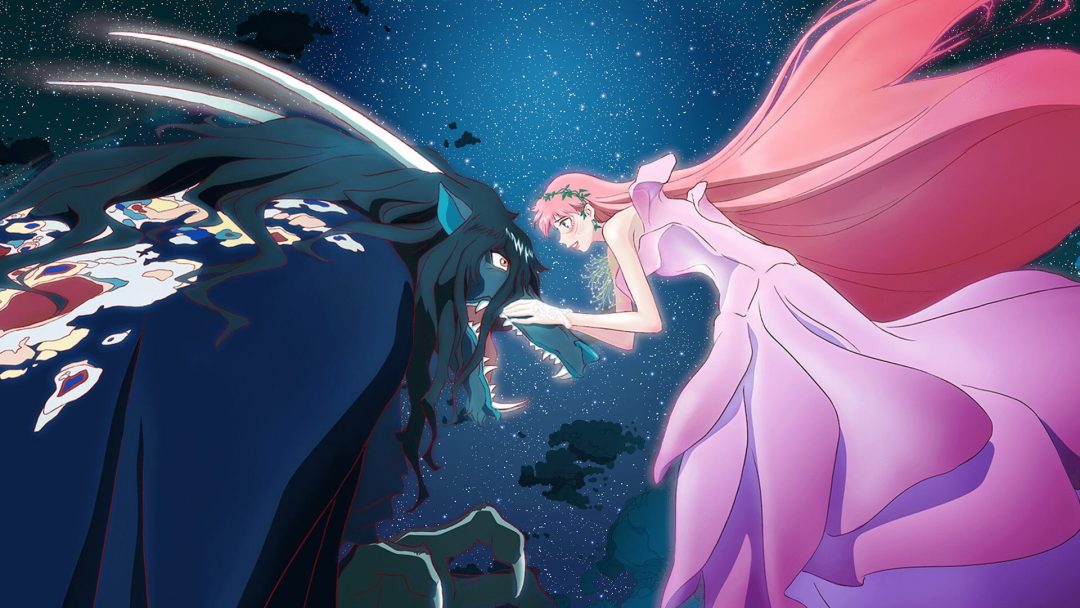 Suzu (Kaho Nakamura) is a shy high-school student living with her father. When her best friend Hiro (Lilas Ikuta) invites her to “U”, an online virtual reality world, Suzu is transformed into “Bell”, a beautiful avatar with a voice that soon attracts millions of followers. While her online alter-ego gains popularity, Suzu remains largely unnoticed at school, aside from her childhood friend Shinobu (Ryo Narita), Hiro, and “Kamishin” (Shota Sometani), the lone member of the canoe club. Suzu’s enviable online life is disrupted by the appearance of a mysterious figure in the guise of a beast, known as Dragon (Takeru Sato) whose shocking appearance and pugilistic lifestyle pique her curiosity. She sets out with Hiro to discover who is behind this avatar.

Mamoru Hosoda returns to some of the themes of his earlier film “Summer Wars” with this modern take on the “Beauty and the Beast” story set partly online. The world of “U” differs from most depictions of online environments with the futuristic addition of biometric transfer, meaning that individuals own biometrics are used to generate their avatars, and a fully immersive environment, allowing them to see and feel as if they were in that other world. There is plenty of familiarity in the plot of “Belle”, with Suzu having lost her mother; struggling to “find her voice”; several teen romances; a geeky friend; and the idea of an outsider figure being helped by the protagonist; but the film combines these elements into a unique story. Despite the nods to the older fairytale, and the inclusion of a few references to Beauty and the Beast (roses, a romantic ballroom dance), the film actually diverges significantly from this to the extent that it has few of the same themes. “Belle” tells its own tale creativitely, often breaking into collage like scenes of multiple people talking on webcams, or the touching montage of Suzu’s memories of her mother. This inventiveness transforms a straightforward story into something more heartfelt and engaging, utilising the techniques of online discourse (multiple references, and a more fragmentary style) to create something that feels modern despite its traditional storytelling. The animation is excellent with the online scenes reminiscent of the aforementioned “Summer Wars” and Satoshi Kon’s “Paprika” in the numerous avatars. There are moments that are almost transcendental as we see the vastness of this online space, a modern tower of babel of a million voices calling in unison. Music plays a major part in the story and the songs by a team of artists are inspiring and performed with spirit. While the film is a little overlong, perhaps over ambitious in the number of subplots it attempts to weave in, it manages to hit its emotional beats every time.

“Belle” deals with several themes. Through the online world Suzu is able to rediscover her true self again following a withdrawal into herself following her mother’s death. This transformative power of technology is shown in more stark contrast with the story of Kei, who is escaping a tragic homelife of physical abuse and attempting to create a hero for his younger brother to aspire to. It is interesting to see a largely positive take on the idea of social networks and online spaces with the central message being that they should be used to supplement and aid us rather than becoming an all-consuming other life. The film also finds time for a satirical dig at internet commercialisation, with the self-important guardians of “U” appearing in front of a bank of sponsor logos. Hosoda does an incredible job of dealing with difficult themes, of loss and child abuse, in a family friendly film that manages to be uplifting and positive.