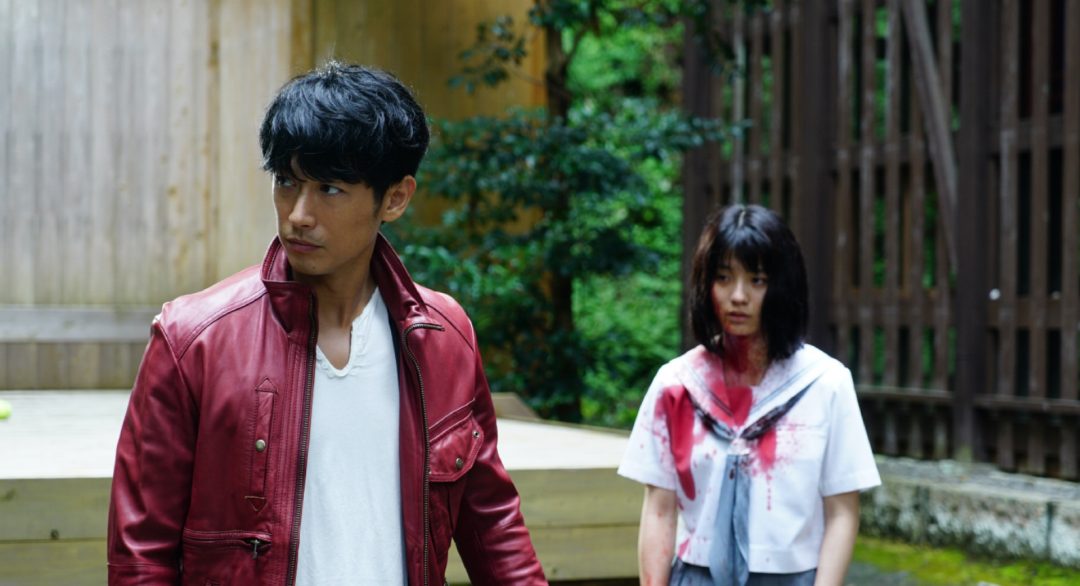 Daisuke Tateishi (Dean Fujioka) works on the ninja show at an Edo-themed amusement park. Although he is a skilled martial artist, he is relegated to doing the sound effects as it is believed he is traumatised following an incident at a previous job. When one of the cast members leaves, he is elevated to a performing position but his genuine swordfighting ability ruffles feathers with his co-workers. Meanwhile, elderly farmer Ryuzo Takada (Tetsu Watanabe) is being pressured to sell his land to greedy developers at the behest of politician Kurosaki (Tetsuya Bessho). Daisuke meets Ryuzo’s daughter Ayumi (Aju Makita) and agrees to help protect her from this unscrupulous gang, drawing himself into conflict with them.

“Pure Japanese” is directed by Daishi Matsunaga (Pieta in the Toilet) with a screenplay by Tatsuo Kobayashi. The plot of the film is straightforward, with greedy developers pressuring an unwilling elderly local into giving up their land. Daisuke’s story also is a familiar one of a young man overcoming past trauma. However, these story elements largely serve as hooks on which to hang the film’s main themes. Many plot elements remain unresolved and there is certainly no happy ending. Instead the film uses its characters and situations to challenge traditional notions of Japanese identity. The cinematography is exceptional, with stunning shots of mountains and rivers offering a timeless counterpoint to the human drama. The staging and lighting is also a joy, with carefully constructed shots that reflect both the real world and the fictional drama of the ninja performances, with the line between the two becoming blurred as the story progresses. The action sequence that takes place later in the film, playing on the hyper-stylised portrayals of samurai films is well shot and choreographed. This latter half of the film seems to diverge from the first half, but the two work well together in the context of the film by exemplifying some of the themes visually in the contrast of a more violent, fantastical ending following the human drama. The music echoes this theatrical style, with loud discordant chords playing over scenes of heightened emotion, and the drumbeats and percussion underscoring the fight sequence reminiscent of traditional stage performances.

The film uses its simple plot to explore the notion of national identity. Early in the film Daisuke is given a “Pure Japanese” kit that promises through a nose swab to tell and individual what percentage of their genetic makeup is Japanese. While most of his colleagues recieve around 60 to 80 percent, Daisuke performs the test by himself and claims to recieve 100 percent. Later in the film it is revealed that this kit is pseudo-scientific nonsense, and a discussion ensues as to what it means to be Japanese, whether in fact there is any genetic basis at all. We see Daisuke being bullied for singing English songs as a child; references to Yukio Mishima (a well known nationalist); the idea of globalisation versus traditional communities; and constant reference to the idea of a “Japanese” identity. Daisuke’s work at an Edo-themed park gives us an insight into the connection between the past and present and there is a sense in which Japan is unable to move on from its violent past; and perhaps even doomed to repeat it. In the character of Daisuke, a stand-in for the ‘true’ Japanese identity, we are given a conflicted character, capable of care and protecting the less fortunate, but also of violence and destruction.