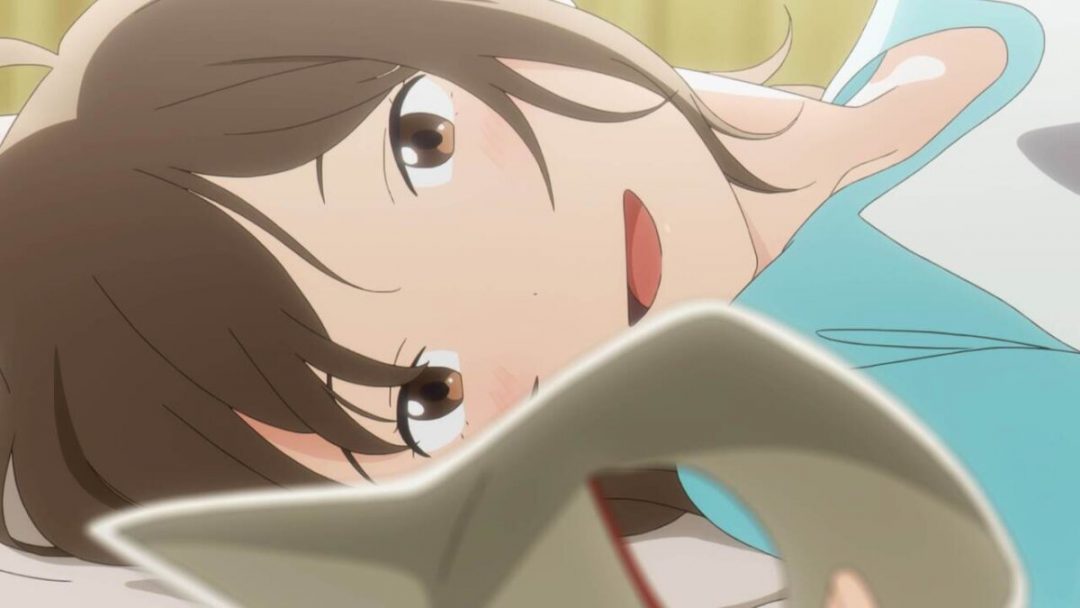 A Whisker Away (2020) by Junichi Sato and Tomotaka Shibayama

Miyo (Mirai Shida), also known as Muge,  is a middle-schooler who seems to have boundless energy, her bright and cheery disposition masking a disatisfaction with her life and past family issues. She lives with her father (Susumu Chiba) and his new partner (Ayako Kawasumi) after her mother (Sayaka Ohara) left them both when Miyo was in primary school. Miyo also has a huge crush on her classmate Kento Hinode (Natsuki Hanae), but is unable to express herself seriously to him. Hinode is also dealing with family issues, putting on a brave face to the world. He confides his feelings in a stray cat, who he names Taro after a dog that died. Unbeknownst to Hinode, Taro is actually Miyo, who acquired a magical mask allowing her to transform into a cat. Things become serious when the mysteirous cat mask-salesman (Koichi Yamadera) offers Miyo a choice between remaining as a cat or giving up the magical mask.

Directed by Junichi Sato and Tomotaka Shibayama, with a screenplay by Mari Okada, “A Whisker Away” is an enjoyable family film, with magic, romance, and relatable characters. There is a fairytale feel to the story, with the mysterious cat salesman, a simple yet difficult choice for the protagonist, and elements such as the hidden city of the cats. This fairytale atmosphere is also emphasised in Miyo’s literaly rose-tinted view of Hinode, the screen blushing pink when she sees him. While the story follows a traditional narrative, it also smuggles in tougher themes that will resonate with some viewers. The separation of Miyo’s parents, their bitterness towards each other and the impact it has on Miyo, are depicted honestly. The film also does not shy away from issues of mortality, with the mask salesman attempting to steal the longer lifespan of humans by offering the switch to life as a cat. It also does a great job with the two leads, Miyo and Hinode, being typical teenagers in their inability to express themselves openly, resorting to either an exaggerated ‘brave face’ persona, or turning inwards. The supporting cast, even smaller roles such as Hinode’s older sister, are all given something of a backstory and personality, helping to make them more than just window dressing.

The art, animation and elemental effects all create a tangible world that also seems to echo the characters emotional states. The warmth of the sun, the dampness of the rain, are all palpable, and the subtle environmental details create a believable setting. Even the magical world of the cats is presented in a realistic way (although it is hard to see how cats managed to construct walkways and cable cars). The score, by Mina Kubota, is perfect for the film, blending eerie mystery when the cat salesman appears with the sentimental, romanticism of Miyo and Hinode’s relationship. The traditional fantasy elements in a modern setting is something that is reflected in the music, with various instruments and styles contemplating both the contemporary romance or the older, more mysterious, magical moments.

“A Whisker Away” is a film that bolsters a familiar teen romance story with more difficult themes of dealing with loss. The separation of Miyo’s parents and her ostracization by classmates is upsetting to watch and gives a deeper understanding of her over-the-top clowning as an attempt to deal with it. The film works well for children and adults in that sense, with a magical romance for younger viewers, while older viewers will latch on to the difficulties in introducing children to new partners, or being a new parent to a child. There is also a strong theme of being able to express yourself that runs throughout, both in the story of the children and the adults. It contrasts the relaxed life of a cat, with that of humans, whose lives are filled with difficulties. The cat salesman offers Miyo an easy way out, but one that will not result in true happiness. In order to get what she wants, she must face up to people and the world. A hugely enjoyable family film with beautiful animation and a story that is engaging for viewers of all ages.