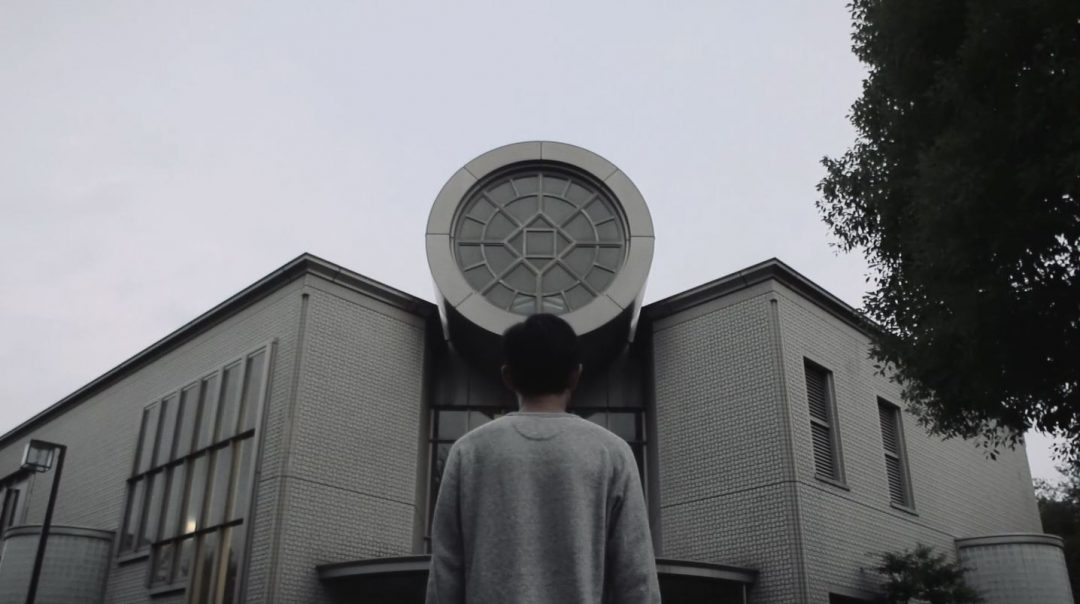 A man (Yoshitaka Ishizuka) wakes up naked in a park. Gathering his clothes from nearby he wanders the streets of an eerie uninhabited world. He seems drawn to a library and when he leaves he looks up at the night sky to see planet earth above him. Later he meets a schoolgirl (Yuka Funahashi) who takes him back to her home. She treats him kindly, feeding him and playing Othello with him, but handcuffs him up in the basement when her boyfriend is coming round. Later the man sees another woman (Misato Akizawa) in a red dress at the library, which stirs memories that threaten to expose dark secrets and unravel the mysteries of this strange world.

“My World” is much like seeing the scattered pieces of a puzzle and being asked to reconstruct the narrative from them. It sets up several intriguing mysteries, adding a few more as things progress. Why is he waking up naked in the park? Why is the world apparently uninhabited besides him and a couple of other people? Who are the girl and the woman in the red dress? All of these questions are answered throughout the film, but it requires concentration to put it all together. On occasion the film slips into more abstract, art-house territory, a visceral, emotional jolt that keys us in to the fact that things perhaps aren’t meant to be taken literally. The film plays with space and time, creating this liminal dimension where we are as disoriented as the protagonist, not sure whether he is alive or dead, awake or dreaming. The soundtrack by Hisayuki Ishikura captures the bizarre, otherworldy tone perfectly, a blend of industrial electronica, and percussion that could almost be the protagonists psyche leaking into the score, at times a scramble of freestyle drumming and at others a sinister metronomic click-clock. The actors do a good job with their characters who remain mysterious but with enough depth to make them engaging.

The film is a fantastic mystery-box for those who enjoy analysing and picking apart clues in the visuals and dialogue. While much of the puzzle is explained, not explicitly but with enough information to grasp what is happening, it does leave a number of things open to speculation. There is a psychological element to the film, with the ‘world’ that the man finds himself in being partly of his own construction. As a short film, just over an hour, it is an entertaining watch, moving along briskly enough that there is always something new to concentrate on. There are also many memorable moments, almost dreamlike in their effect, such as the image of earth hanging silently in the night sky, and the more arthouse moments with the protagonist in a stark white space. Definitely worth checking out if you are a fan of this kind of surreal, arthouse mystery.