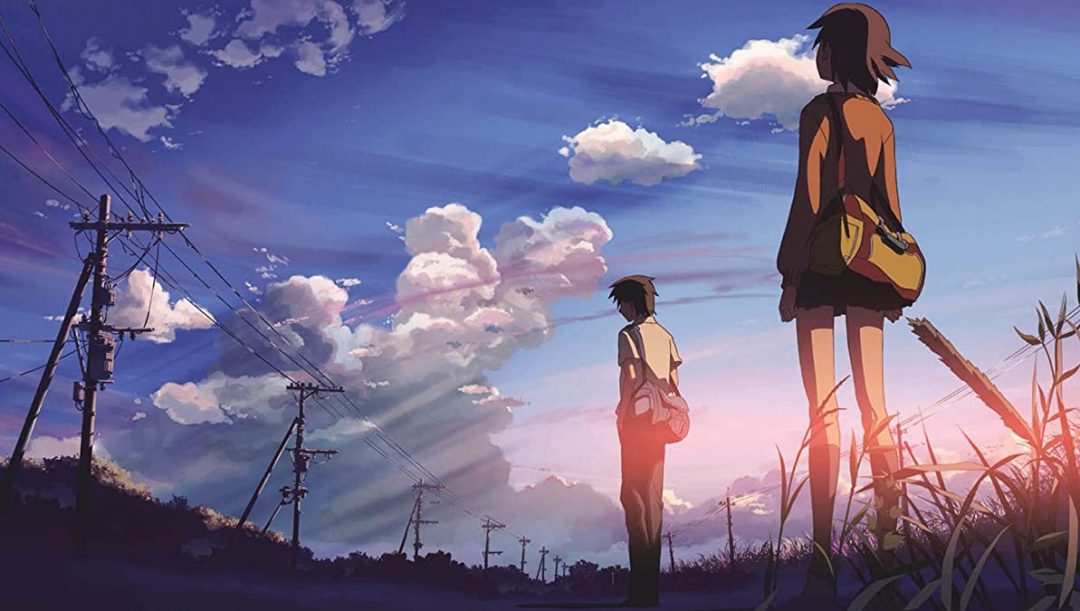 5 Centimeters Per Second (2007) by Makoto Shinkai

Two teens face a difficult separation in this melancholic exploration of young love. Takaki Tono (Kenji Mizuhashi) and Akari Shinohara (Yoshimi Kondo) become friends after both transferring to the same high school in Tokyo. After Akari moves north to Tochigi they remain in correspondence. Takaki decides to take a train to meet her, knowing it will perhaps be the last time as he is soon due to move with his family as well. As the snowy weather worsens and the train is delayed, his agony at reuiniting with Akari is heightened. Following Takaki’s move another girl, Kanae Sumida (Satomi Hanamura), becomes romantically interested in Takaki, but realises that she is unable to close the distance between them due to his longing for Akari.

Makoto Shinkai’s “5 Centimeters Per Second” returns to a theme from his earlier short film “Voices of a Distant Star”, that of a separated couple struggling with loneliness and yearning for human connection. It is unconventional as films go in that there is very little plot or dialogue, with most of the story told through the internal monologues of Takaki and Kanae. Instead it explores its themes in a more expressionistic way, creating a tangible world through small details. Water droplets on a train window; the light from a vending machine at a remote station; cherry blossoms blowing by a railway crossing; all of these picturesque images evoke feelings that are relatable but impossible to describe. The film is around sixty minutes and comrpised of three segments. The first shows Takaki travelling to meet Akari, the second Kanae procrastinating in confessing her love to Takaki, and the third some time later as both Takaki and Akari regret their loss. This atypical structure and lack of any conclusion or closure for the characters may be offputting to some, with its melancholic ending. It is best to approach the film more as an experience, one that you can explore and enjoy without worrying about following a narrative or hoping for plot points to be tied together. What the film does offer is a unique take on the romantic drama, with animation that realises the beauty of the everyday, the commonplace given significance by the characters. The world of “5 Centimeters Per Second” is searingly real in its ordinariness, with delayed trains, and circumstances outwith the characters control, but manages to find magic in these familiar environments.

“5 Centimeters Per Second” refers to the speed at which cherry blossoms fall to the ground. The film, with its twin focus on both the industrial, trains and rockets, and natural worlds, fields and oceans, relates to the central theme that life moves on in spite of humans. Takaki and Akari’s sundered love is hearbtreaking precisely because nothing changes around them. They are left yearning for something that will never come to pass while the world moves on. At its heart the film questions what that love is when it cannot be expressed; it shows us a vision of a beautiful yet uncaring world, the joy and hope of being in love tempered by human anxieties and feelings of helplessness. A stunning experimental animation that eschews traditional narrative to create something more poetic and at times transcendent.