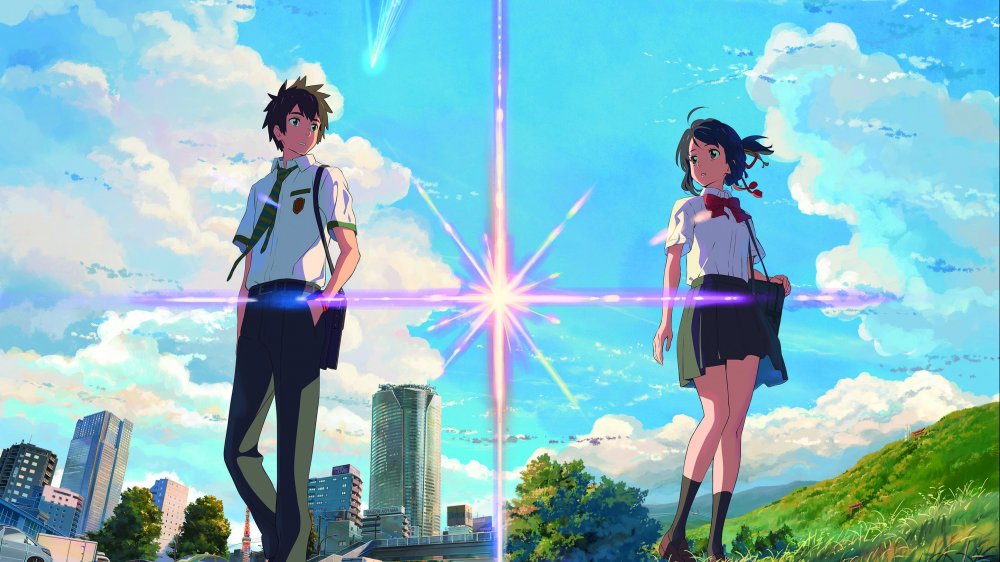 Mitsuha is a highschool girl living in a remote rural community. A conscientious girl, she takes part in the villages cultural event as a shrine-maiden along with her younger sister and grandmother. But Mitsuha dreams of moving to Tokyo away from the monotony of rural life. Taki is a highschool boy living in Tokyo, the very life that Mitsuha dreams of and the two find themselves inexplicably living each other’s lives. At first they believe that this second life is simply a dream that they struggle to remember on waking, but as the pair’s friends explain to them their bizarre behaviour they begin to understand that what is happening is real. Without knowing each other they have somehow become bound together. As the film progresses there are several twists and turns that take the story in unexpected directions as a disaster threatens Mitsuha’s hometown.

Makoto Shinkai (5 Centimeters per Second) has once again directed a stunningly beautiful animation. The world of the film, both rural and urban, is recreated with exceptional skill and an eye for incidental details that help bring it to life. Many of the scenes are works of art, the lakes and mountains of Mitsuha’s home are exquisitely depicted. Shinkai certainly has developed a recognizable style of his own and that is present here, in particular the use of light, with dazzling sunbeams, starlight, dawn and dusk captured brilliantly, though occasionally it becomes excessive and a more restrained approach may have worked better. You can feel the mountain air and the bustle of the city and it is a world that you could happily step right into. RADWIMPS provide several songs for the film and this seems to indicate a step to a more commercial direction for Shinkai. The piano score more reminiscent of earlier works is still here, but there are a number of up-tempo montage sequences, a focus on comedy, and more traditional relationships developed in the subplots that make this a more easily accessible work. The story does a good job of keeping you guessing. Unlike other body-swap movies where the plot is explained in the beginning, the film keeps its secrets until it is ready to reveal them. In the end everything is wrapped up more neatly than some might like, but the way it builds to that moment is so full of emotion that it is forgivable. Both Mitsuha and Taki have entertaining subplots in their own stories and characters that are enjoyable to watch.

As with Shinkai’s earlier works (Voices of a Distant Star, The Place Promised in our Early Days, 5 Centimeters per Second), “Your Name” deals with a theme of love and a couple sundered by an impossible distance. The characters are always reaching for something that is just out of grasp. In particular when their attempts to call one another fail to connect. The film also contemplates the nature of fate and the inter-connectedness of humanity. Doors opening and closing throughout the film offer a perfect visual metaphor for the choices that guide our lives. The film largely shies away from discussing the transgender themes implied in its premise. These are largely played for laughs with the characters becoming used to each other’s bodies or acting out of character. Nevertheless, that aspect of the film is somewhat unavoidable given the story. There is so much to enjoy about the film, from the incredible animation, deep themes, humour, and a thrilling story that it is definitely worthy of the praise it has garnered.