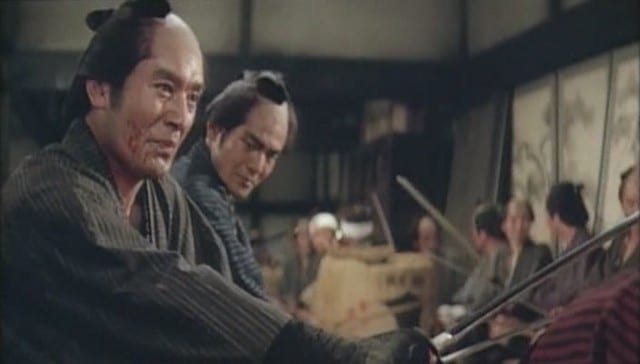 Three stories set in different historical periods, connected only thematically, show the yakuza way of life in all its cruelty. The first takes us back to the era of samurai and swordfights in the street. We are told that the yakuza have only two rules: don’t steal and don’t sleep with married women. Following the violent overthrow of a rival group, one gang feels their position is secure. But affairs and a loss of control by the boss leads to a devastating climactic showdown. The second story is set many years later and follows a gang member recently released from prison. Having served three years for an attack on a rival boss, he is disappointed when his fellow yakuza do not come to visit. He is further upset to find his former girlfriend, believing he had died, to be with another man. The final story centres on a gold heist gone wrong and an elite marksman. Double-crossing gangsters and gun fights abound.

Director Teruo Ishii delights in the most violent and extreme of human drama. “Yakuza Law” begins with credits playing over scenes of grisly and creative tortures employed by gangsters (most of which are not even seen in the film itself). This clues the audience in to the shock value that is at the heart of much of this film and also creates an atmosphere of dread that follows every character. Death and punishment are ever present threats in the world of the yakuza. The three stories act as morality tales (albeit emphasising the twisted moral code of the yakuza), with simple plot structures and broadly drawn characters established to make a point about honour, betrayal, and retribution. The film is packed with action and doesn’t shy away from the gory details of their various punishments, whether cutting off body parts, drowning, burning with a lighter, or even more creative tortures used in the final chapter. Tonally the film is a great example of the exploitation genre, moving from disturbing to comedic with startling alacrity. By the time the third part rolls around it’s no longer clear whether any of it is meant to be taken seriously. The special effects are pushed to their limits (and often beyond) to show the depravity of these people. Even when the effects are shoddy, the sheer cruelty or bizarreness of what is happening is enough to make it alarming. The fact that “Yakuza Law” is essentially three films in one is amazing, as all three parts are all equally engaging and do something different with the premise of gangsters breaking their promises and the backlash that follows.

“Yakuza Law” has a very tongue-in-cheek approach to its subject matter that makes it difficult to easily judge its sincerity. The yakuza are shown to be both terrifying and ridiculous in equal measure, with their strict code of honour barely disguising their underlying thuggish behaviour. Setting the three stories side by side also gives the film a theme of the eternal atavism and strips away the veneer of civilisation to show that throughout the generations these men do not change. The perceived cruelty of yesteryear is in fact replicated in modern times, with only the uniforms changing from yukata to sharp suits. Despite their reputations the yakuza are seen as pitiable figures, who lack empathy and are separate from the outside world. They are insular and trapped in a self-perpetuating cycle of violence that is doomed to eventually swallow anyone in its orbit. “Yakuza Law” will appeal to fans of the exploitation genre, with plenty of off-the-wall action and torture. It also provides an examination of the pathology of violence and gang mentality that is brought into stark contrast by the triple narrative structure.