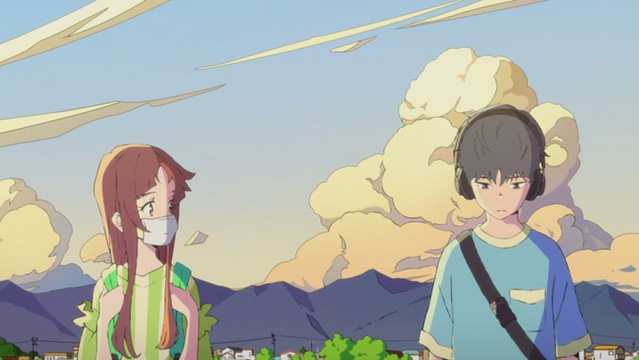 Words Bubble Up Like Soda Pop (2020) by Kyohei Ishiguro

Yui Sakura (Someguro Ichikawa), known familiarly as ‘Cherry’, is a quiet, thoughtful young high-schooler, working part time at a day care centre for the elderly, and spending his free time compiling haiku. Yuki (Hana Sugisaki), known online as ‘Smile’, is an outgoing social media influencer who has taken to wearing a face mask to avoid revealing the braces straightening her buck teeth. The two bump into each other at the mall and soon form a strong friendship despite their differences. Yuki agrees to help Yui find a record for one of the old people at the care centre, Mr. Fujiyama (Koichi Yamadera).

“Words Bubble Up Like Soda Pop” treads familiar ground as a feel good teen drama, with strong visuals, and simple, brightly-coloured art, giving it a dazzling quality that instantly captures the imagination, creating an upbeat, enjoyable, summer atmosphere in keeping with the characters and setting. The character and world design all utilise a simplicity of style with recognizable characteristics, this stereotyping further emphasised by the use of nicknames for many of the main characters, including ‘Cherry’, ‘Smile’, ‘Japan’ and ‘Tough Boy’. The story too is pared back to its most basic elements, essentially a youthful summer love story twinned with Mr. Fujiyama’s search for the missing record and his own forgotten romance. With an upbeat pop soundtrack and colourful animation the film is a perfect watch to lift your spirits.

“Words Bubble Up Like Soda Pop” creates a tension between the traditional poetry form of haikus and the ultra-modern elements embodied by Yuki, such as an obsession with mobile phones, social media and celebrity. The film brings haiku to a contemporary world, showing the power of words and poetry. The “beauty through simplicity” of haikus is an ethos that aptly describes the film itself. The story, the visuals, the animation, are powerful precisely because of their simplicity. Examples of this include the moments where we see Yui and Yuki in split screen, drawing our attention to their similarities and differences. Yui wears headphones to avoid having to engage with the world, while Yuki wears a face mask avoid the attention of the world. It is these moments that make the film such an enjoyable watch; what appears on the surface a straightforward story, on second glance has so many elements just below the surface. It is possible, just as with a haiku, to find genuine beauty in this simple romantic tale.