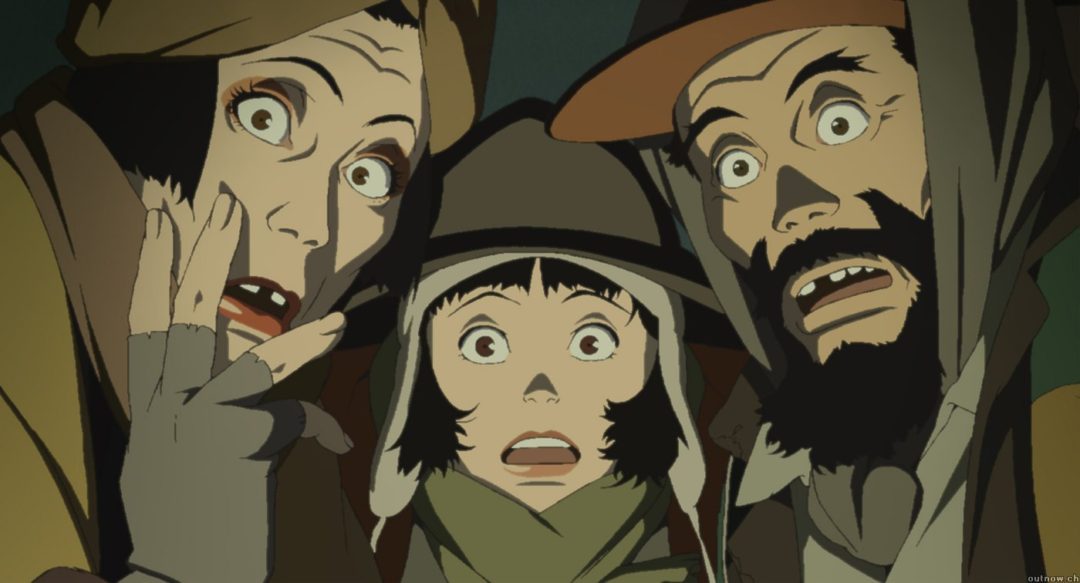 Set in Tokyo, in the lead up to New Year, the film follows three unlikely companions, Gin (Toru Emori), an alcoholic who has lost his wife and daughter, Hana (Yoshiaki Umegaki), a transvestite, and Miyuki (Aya Okamoto), a young girl who has run-away from her parents. These three homeless individuals become part of a bizarre tale when they find a baby left in a pile of rubbish. Full of unlikely coincidences, hilarity and tragedy, the film follows the trio as they attempt, by following clues left with the baby, to locate her parents.

Satoshi Kon’s third film and a departure from his other work in that this film has very few mind-bending sequences (there are a couple of surreal moments, reserved for flashbacks or dreams). The story could be described as straightforward, however the film is far from boring. Each character has their own demons to fight, or salvation to seek, and the film manages to perfectly weave the central plot through these various private stories, concluding them all satisfactorily. The animation is good throughout, but truly stunning in places with scenes of Tokyo at night, the snowfall that is present throughout, and an almost transcendental moment towards the end of the film of a sunrise. This blend of the everyday and the sublime, is replicated in the short haiku performed by Hana at times. It seems as though the film is asking you to take a look at the world, and see the beauty that is often missed when you are focused on your own life, or street level concerns; also to appreciate fortuitous occurrences rather that focus on misfortune.

This is at heart a feel-good New Year’s movie, centring on a common theme of family (and family reunions), with plenty of tear-jerking moments and lots of laughs throughout. However, the film also deals with some difficult societal problems, such as homelessness, the breakdown of family units, gambling, alcoholism, featuring characters such as transvestites, yakuza and gangs of unruly children. I found that the film had a cumulative effect. The opening scene shows the three protagonists at a Christian ceremony, which Gin seems particularly unmoved by, while Hana is willing to believe in ‘Christmas Miracles’. Throughout the film hope is always a faint glimmer in the distance (the hope that they’ll find the baby’s parents, and the hope they’ll find forgiveness, redemption or salvation). Each unbelievable lucky break might make you shake your head, but you find yourself slowly becoming more involved with these characters, and really willing them to succeed. When the film reaches its finale you are completely prepared to believe in some kind of divine providence.