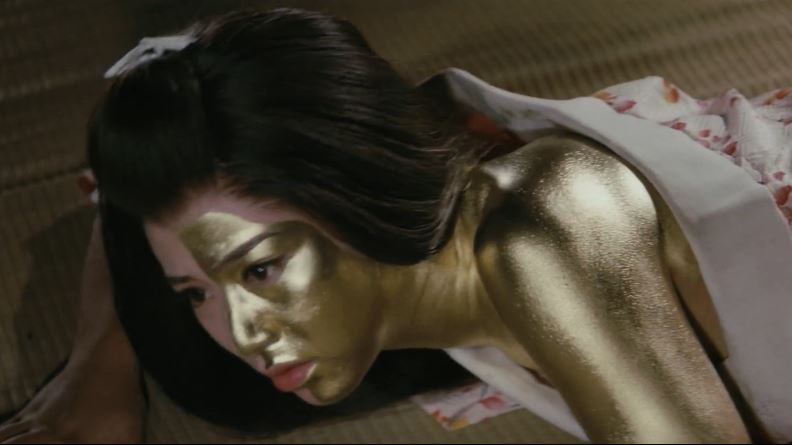 “Orgies of Edo” tells three stories connected with themes of sex and violence. The first story follows Oito (Masumi Tachibana), a young woman who is tricked by a gangster into a life of prostitution. The second features a woman with strange sexual perversions. She has a fetish for rape by men who are disfigured. In flashback we learn the dark secret that lies behind her perversion. She is attended by a man who harbours unrequited feelings for her, though towards whom she has no affection. The final story begins with a sadistic lord who delights in watching his harem being gored by a herd of bulls. One of the women takes his eye, seemingly a masochist with an equally insatiable appetite for torture and pain. However, she is also carrying a secret, one that threatens to end their twisted relationship.

The film written by director Teruo Ishii with Masahiro Kakefuda is a portrayal of the most base impulses of human society, lust and violence. Each tale unfolds almost as a dark parable, although the moral of each tale can be hard to discern at first. Despite a heavy emphasis on sex and gore it would be wrong to dismiss the film as mere titillation. There are deeper themes at work. Likewise, although the women are shown as victims in almost all cases, the film is sympathetic towards them. There is a certain sense in which the film delights in the most obscene material, incest, bestiality, rape, sexual violence and sadomasochism, but the film’s almost art house opening and closing sentiments set these things in context. The opening, with grotesques coming forth from a cabinet cues the audience in to the idea that this is intended as gruesome theatre. The stories are exaggerated portrayals of the very worst kinds of behaviour. The opening credits to the film are offensively garish, with names juddering and flashing across the screen while the music blares in concert with the images. Like with other films of the exploitation genre it intends to assault you with its message and has little time for subtlety. Ishii’s voyeuristic directorial style makes the viewer complicit in the horrors, peering from above as the terrible events unfold. There are great performances in all of the stories, especially from the main cast of women. The gory special effects are a little dated, and certain plot points cross the line of unacceptable racism, but a film of this kind is almost obliged to be as offensive as possible.

“Orgies of Edo” is disturbing from its first moments and in a little over 90 minutes manages to cover prostitution, infidelity, rape, incest, bestiality and sadomasochism. The film lays out a brutal worldview, one in which characters do despicable things and women are subject to all manner of sexual and psychological violence. The shock tactics are highly effective and it is not a film that could be considered boring, although some may find it offensive or distasteful. It is hard to summarise the messages of the film as they are multifarious. It does touch on ideas of power in sex relations, on the male tendency to violence, and on the underlying psychological causes of sexual perversion. In a sense the film is intended to provoke strong emotions, both of disgust and empathy towards the characters. The god-like perspective of many scenes also hints at a possible anti-theistic reading, as we are forced to watch impotently as the horrors unfold. This is a world in which morality, if it exists at all, is pushed aside and humans are shown as base and atavistic organisms. While passing decades and an increasingly liberal society may have dated certain scenes (particularly the use of dwarves and a black man as shorthand for ‘difference’ in the middle story), the film works well as a shocking exploitation drama with a message.