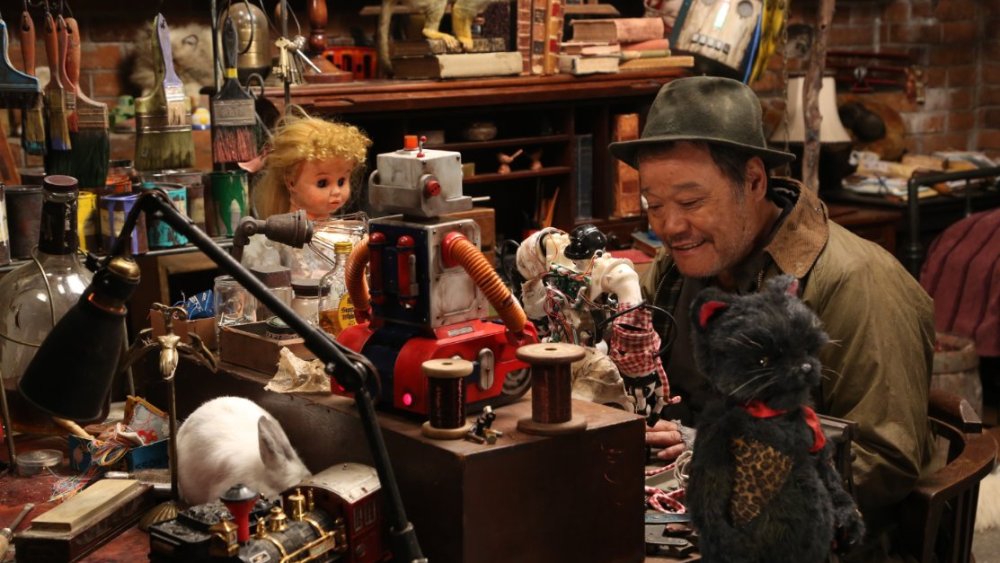 Ryoichi Suzuki (Hiroki Hasegawa), a lowly office clerk, dreams of becoming a rock star and reliving the successes of his younger years. He also has romantic inclinations towards his co-worker Yuko Terashima (Kumiko Aso). One day at lunch he buys a small pet turtle which he takes back to his apartment, sharing with it his hopes and ambitions and naming it ‘Pikadon’. After being bullied for having the turtle at work, Ryoichi flushes it down the toilet. The film then splits into two stories: one following Ryoichi on his journey to musical greatness via series of unlikely chance encounters; the other following Pikadon as he finds his way to a homeless man (Toshiyuki Nishida) in the sewers, who has collected a group of talking toys and animals to him.

Written and directed by prolific film-maker Sion Sono, this film has the expected blend of hilarity, tragedy and all-out insane spectacle. “Love and Peace” always seems to be heading in one direction and then quickly takes you somewhere unexpected. The finale of the film is a spectacle that is utterly ridiculous, but entirely in keeping with the anarchic sensibilities of the rest of the film. The split narrative of Ryoichi and Pikadon gives an interesting flavour to the film, showing the darker side of society’s relentless obsession with fame to the detriment of compassion and care. The abandoned toys in the sewers serve as a poignant reminder that consumerism often leads to a selfish mindset that neglects anything seen as old or worthless. The acting is great, particularly from Hiroki Hasegawa, who does a fantastic job portraying the put-upon Ryochi, bullied and unable to achieve his dreams, and later his rock-star alter-ego “Wild Ryo”, boastful and comfortable with the adoration of large crowds. Also great is Toshiyuki Nishida, who plays the homeless man to whom all the lost toys manage to find their way. His portrayal of the kindly drunk is one of the most touching parts of the film. The music consists largely of two songs: Beethoven’s “Ode to Joy”, and the constant refrain of Ryoichi’s big hit “Love and Peace”, which you may find yourself humming throughout.

The main theme of the film concerns Ryoichi’s search for fame and how this leads to him abandoning those things that are truly important. It is far from subtle in the transformation of this retiring office worker into an arrogant rock star and likewise in showing the effects of his selfish actions. There is also the complimentary story of the toys, who find themselves abandoned and unloved once Christmas is forgotten (a metaphor for the fickle nature of celebrity and a pointed statement on the consumerism of the season). I would highly recommend this for the unexpected laughs, the bizarreness of the concept, and for some genuinely moving moments involving the homeless man and the toys.