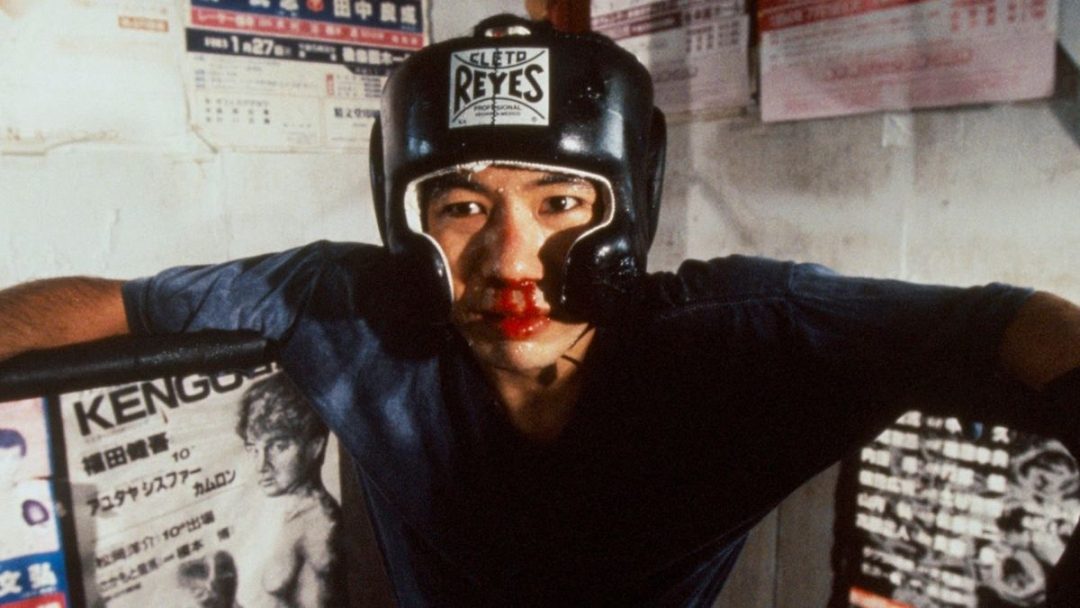 Tsuda (Shinya Tsukomoto) works as an insurance salesmen, living a comfortable, if monotonous life, with his girlfirend Hizuru (Kahori Fujii). Their relationship is jeapordized with the reappearance of Tsuda’s old schoolfriend, Kojima (played by Tsukamoto’s own brother Koji Tsukamoto), a small-time boxer, who soon makes a move on Hizuru. The three of them are plunged into a world of emotional and physical violence as Tsuda takes up boxing in an attempt to revenge himself on Kojima and win back Hizuru.

“Tokyo Fist” is an unconventional boxing film, the action flowing from the emotions of the characters instead of vice versa. What begins as a simple narrative about a jilted lover on a mission of revenge soon becomes a much deeper analysis of societal violence and human psychology. Writer-director Tsukamoto infuses the film with sequences that draw a direct comparison between the physical and the emotional, tipping into art-house and horror with its visceral, abstract visuals. The use of colour shows a director who is at ease using the full range of cinematic techniques to tell his story. It is very much a film that requires thought and attention, noting the shifts from blue to red, the frenetic hand-held camerawork and framing, the flashes of extreme bloodletting, all of these things are not simply done to keep things visually interesting, but are an integral part of the storytelling. The film provokes its audience, drawing you in to sweat-drenched close-ups and flinch-inducing sequences of body modification, causing you to experience the pain and suffering of the characters along with them. Tsukamoto gives an excellent performance in the lead role as Tsuda, a man who is forced to forsake his comfortable life for one of violence and struggle, buffeted by his own emotions and the actions of others. Kahori Fujii’s Hizuru is far more than a supporting role with a narrative all of her own, a parallel to the struggle of the two men she is involved with and a reflection of the themes of suffering as a form of release. Her relationship with pain comes to be one of the most intriguing aspects of the film, seemingly reinventing herself as her situation changes. Koji Tsukamoto’s Kojima is likewise a complex character, particularly after his backstory is revealed, who reflects the same paranoia, deep-seated anger, and sense of helplessness expressed by Tsuda.

Shinya Tsukamoto returns to a common theme in his work, that of violence and pain. The use of boxing here gives a perfect story on which to hang many of these themes, acting as a conduit for the passion, suffering, physical and mental pain, that pervades society. As the film progresses the central story of Tsuda, Hizuru and Kojima, becomes less important, instead overwhelmed by the enormity of the forces that seem to be guiding them. Jealousy, lust, anger, hatred, revenge, many of the worst human impulses are characterised in these three individuals. Their individuality becomes blurred as they increasingly reflect each other in their rush towards suffering, perhaps they are simply becoming conduits for an ever present aggression in the world itself. There is an interesting scene with the moon that suggests inescapable natural urges are driving them. The film also shows how their environments, the grim, urban decay of the city’s streets and underpasses, inform and emphasise their emotions. A thought-provoking film that demands deeper consideration. Excellent central performances and a director at the top of his game in creating a work that captivates, dragging you through the suffering of its characters in the hopes that you come out with a deeper understanding of the forces that drive human interaction.