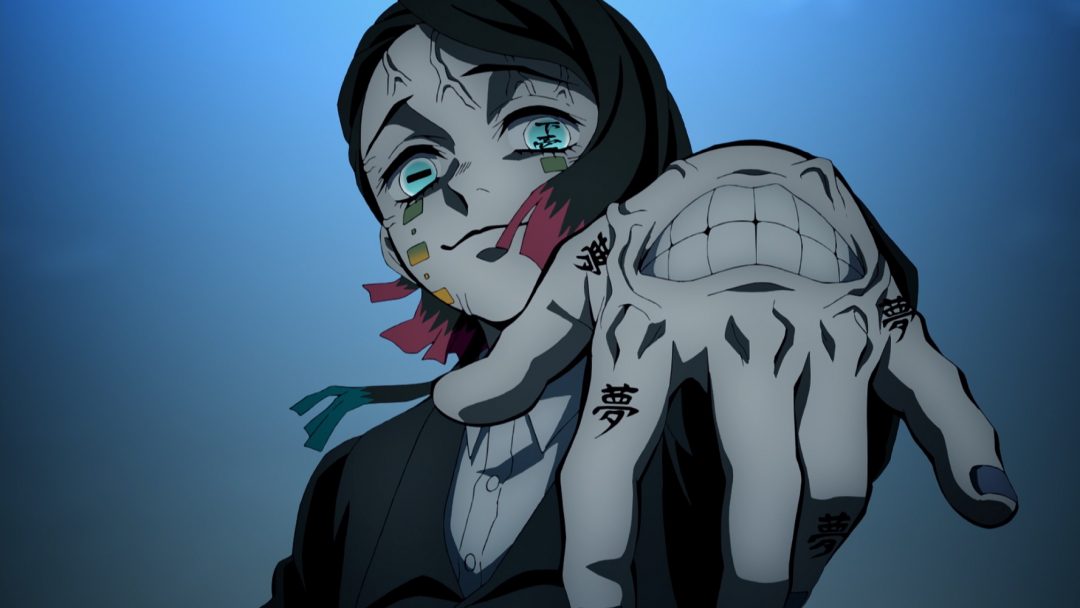 While it is possible to enjoy this film without having seen the Demon Slayer anime, I would advise watching the series first. The film picks up directly from the end of the last episode of the show, with Tanjiro (Natsuki Hanae), Zenitsu (Hiro Shimono) and Inosuke (Yoshitsugu Matsuoka) boarding the titular Mugen Train (or “Infinity Train”). There they find the Flame Hashira, Rengoku Kyojuro (Satoshi Hino), who is on a misson to defeat a powerful demon. It is not long before the demon makes their presence known, putting our heroes to sleep in hopes of killing them while they are vulnerable. This gives us a look into the psyche of the characters through various dream sequences which they must escape from.

Essentially an extended episode, “Demon Slayer: Mugen Train” is an action-packed continuation of the set-up that ended the series, featuring gory demonic fights and slapstick comedy. It is great to see the characters back in action again after the training they have undergone. We don’t get too many answers to the questions raised at the end of the show, such as the mystery surrounding Tanjiro’s father, or any nearer a cure for Nezuko (Akari Kito), as this story is intended to bridge the two series. However, there are plenty of twists and surprises in store and it builds expectation for series two with a thrilling climactic battle that pushes the story forward in a dramatic way. The blend of animation styles, featuring 2D and 3D animation, the garishly juxtaposed comedy, dark themes and subtext, explosive action, powerful soundtrack, and moving storylines, will be familiar to fans of the show and the film delivers everything you have come to expect from “Demon Slayer”. This is hardly surprising as the film has the same director as the series, and the same incredible music from Yuki Kajiura and Go Shiina creating that epic feel.

In having a demon who uses the power of dreams to entrap their victims, the film allows us to look at the characters inner-lives, Tanjiro’s underlying trauma; Zenitsu’s infatuation with Nezuko; and Inosuke’s animalistic desire to fight are highlighted as key drivers in their behaviours. The decision to set the film almost entirely aboard a train means that the filmmakers are able to expand this inner-world without the distraction of too many new elements. Instead we have again creative antagonists, using unknown Blood Demon Arts, and the chemistry of the protagonists as they do what they do best. A must-watch for fans, the film has already become a box-office smash due to the popularity of the show and is sure to provide a springboard for viewers to get excited before the release of the second series.