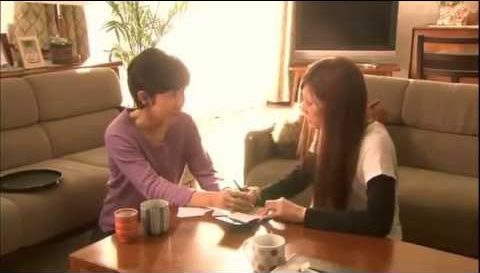 This television drama tells the true story of Rie Saito, a deaf woman who became the number one hostess in Ginza. After contracting meningitis as a young child, Rie is left without her hearing. Her mother (Yoshiko Tanaka) is determined that she achieve her potential, encouraging her daughter to take calligraphy and other classes. After being bullied at school, Rie (Keiko Kitagawa) drops out and starts work at a clothing store. When the store closes she is left with few options and little idea of what to do with her life. A chance encounter with a hostess working at a nearby club offers her a chance to begin a new career, one that her mother is less than pleased with. Rie soon becomes popular at the club and later moves from her home town in Aomori Prefecture, leaving her parents and older brother, to Tokyo in order to work as a hostess in the exclusive Ginza District.

Based on Saito’s own memoirs, with a screenplay by Ayako Kato, the story is a poignant and heartwarming story of triumph over adversity. It is hard not to be moved by her ordeals growing up with hearing loss, struggling to communicate with friends, feeling isolated, being made fun of, bullied and abused by classmates. It is not until she becomes a hostess that her intelligence and charm are fully recognized and she begins to gain popularity, the customers seeing her virtues and not her disability. Keiko Kitagawa gives a great performance a Rie, vulnerable yet determined and able to convey deep emotion without dialogue. Yoshiko Tanaka is also excellent as her mother, and the two share a tearjerking scene towards the end, communicated entirely without words. Seiji Fukushi plays Rie’s brother Satoshi, and his narration structures the drama, explaining various events. It is an interesting choice, and often superfluous, stating the obvious at times. Music supervisor Naoki Yamauchi provides a sentimental score that underlines the turbulent emotions of the characters. Being a made-for-television drama, there are moments where a lack of budget is apparent, but being small-scale the story doesn’t suffer for it.

As is explained in a brief summary at the end of the film, Rie Saito has become an important figure in the fight for recognition and acceptance of disability in Japanese society. She became a member of a local council which implemented text-to-speech systems to help representatives engage at meetings. She wishes to make Japan more inclusive for those with all kinds of disability to fully participate in society. There is a strong theme throughout the film of communication, with Rie losing her ability to communicate, her speech impacted by her hearing loss, yet later finding herself empowered with her pen and notepad. It is mentioned in the film that the writing down of her words had a powerful impact on her clients, as both she and they found themselves able to express themselves truthfully in writing in a way that speaking did not allow. In the aforementioned scene, Rie and her mother find themselves finally able to communicate honestly and openly with each other after many years of bad feeling between them. This powerful message, about the importance of communication and understanding, not only perfectly encapsulates Rie’s own journey but also is a strong call for all people not to ignore those in need, to speak honestly and openly, and to try to understand one another.