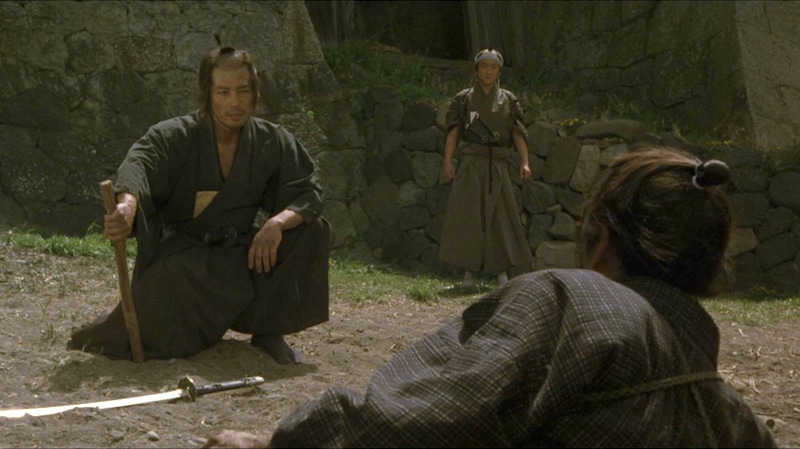 Following the death of his wife, a poor samurai, Seibei Iguchi (Hiroyuki Sanada), struggles to raise his two young daughters and keep his senile mother. His colleagues at the store-house nickname him “Twilight” as he always returns home early rather than join them for drinks. We learn that Seibei is a peaceful, forward-thinking man, who is skilled with a short sword. He is befriended by Tomoe (Rie Miyazawa) whom he has known since childhood, but their relationship is fraught with problems. Knowing of his skill with a sword the clan tasks him with the assassination of another rogue samurai, promising greater profits in return. At first hesitant, he acquiesces to this order from the lord.

Based on the short story “The Bamboo Sword” by Shuhei Fujisawa and directed by Yoji Yamada, the film creates an authentic period atmosphere, with expertly designed sets and costumes. The story is an archetypal samurai drama, with illicit romances, honour and ideals of war and peace played out perfectly. The audience is drawn in by the masterful direction, which really gives a feel of closeness with the characters. The acting is exceptionally emotive, and the young child actors are particularly good in their roles.

Myriad themes are interwoven, but above all it is the story of a generation of samurai becoming obsolete. Seibei’s peaceful, unprejudiced ideologies are mocked in the film, but will resonate with modern audiences. This tragic yet uplifting story of the passing of the samurai age is a must watch.