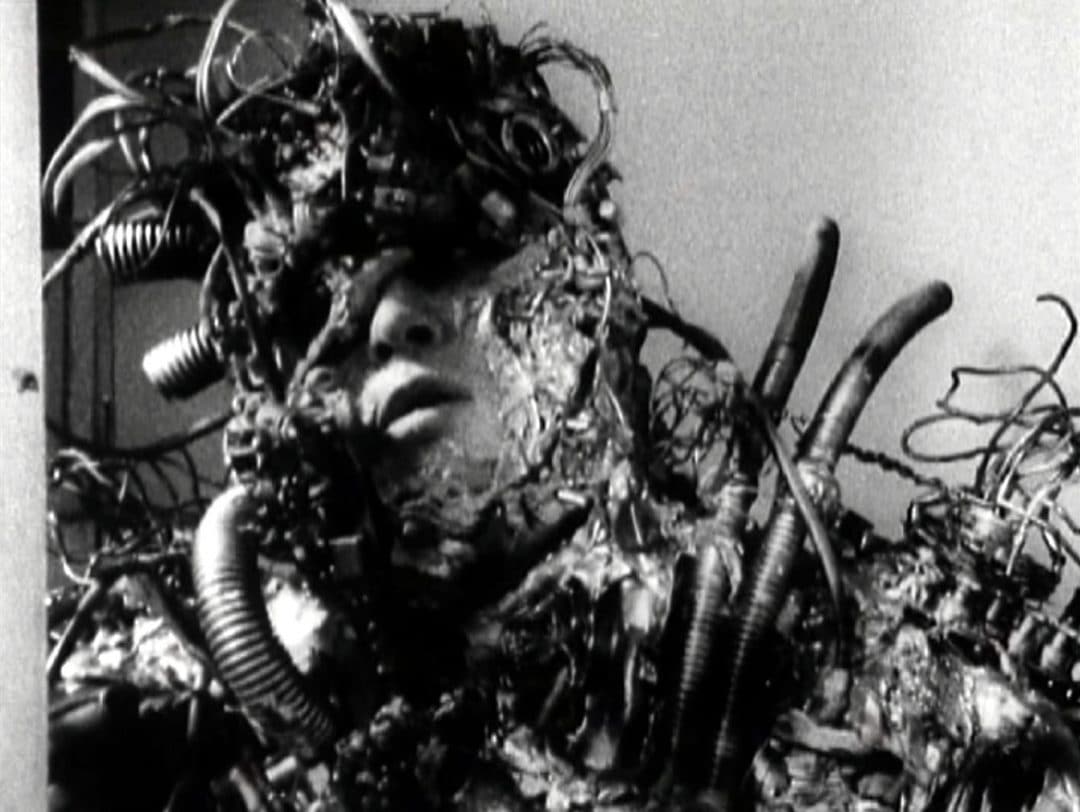 We begin with a man (Shinya Tsukamoto) inserting an iron bar into his leg in a gruesome and inexplicable scene. The man, after seeing maggots crawling around this, runs down the street where he is hit by a car. The film then cuts to a young office worker (Tomorowo Taguchi) who is experiencing hellish nightmares of twisted metal. When he awakes he finds a piece of metal sticking out of his face. This man later returns to his apartment, where he makes love to his girlfriend (Kei Fujiwara). However, a giant drill emerges from his groin and his transformation into the “Iron Man” of the title accelerates. We later learn that this man and his girlfriend were the ones who hit the first man in their car, later disposing of the body and having sex nearby where they dumped it.

“Tetsuo” has a surreal nightmarish quality heightened by use of non-linear storytelling, bursts of stop-frame animation, even the stark chiaroscuro photography. The visuals are stunning and horrific and there are genuine moments of terror as the film plays a lot with claustrophobic close-ups and angles. Shinya Tsukamoto both wrote and directed and it is clearly a singular vison that is being presented here, although drawing on many cyberpunk ideas such as transhumanism and the fetishization of machines. The music by Chu Ishikawa also captures this terrifying tone, with dark, metallic clanging beats really exaggerating the sense of dread and unreality. The overall sound design also goes a long way towards creating a nightmarish vision of a future overrun by the machines.

This film is definitely an experience more so than a story. The make-up and special effects are incredible, capturing the tangled filth of the industrialised world, and a great example of body horror. It can be a difficult watch at times, and will certainly not be for everyone, the frenetic editing can make it tough to follow. There are hints of social commentary, a critique of industrialisation and man’s relationship with machines, alongside themes of psychoses, paranoia, shame, abuse and sexual violence. A unique and terrifying industrial body-horror that is worth a watch for fans of the genre.