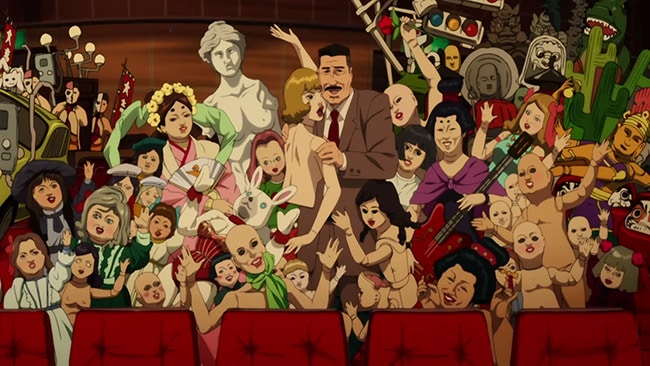 A new technology allowing people to enter another’s dreams has been developed at a research facility. The head of the research department, Atsuko Chiba, is using it to help a detective, Konakawa, with anxiety dreams he’s suffering. When the head of the department undergoes some kind of breakdown they realise that one of the devices, named the DCMini, which allow people to enter dreams has been stolen and is being used illegally. What follows is a chase through the dream world and reality to attempt to discover who the culprit is and how to stop them.

Based on a book by Yasutaka Tsutsui, director Satoshi Kon (Perfect Blue) creates a mind-bending psychological drama, that blurs the lines between reality and imagination in a way that is perfectly suited to animation. Every scene is full of colour and vitality and there is so much room for invention on offer with the central premise that is used to brilliant effect. The sequences of the giant procession through the dreams is a particular marvel for the sheer amount of stuff on screen. The film may require multiple viewings to appreciate every nuance and background detail. Susumu Hirasawa’s score is a hyperactive blend of instrumentation and digitised noise that encapsulates a sense of floating in through a chaotic world.

Concerning itself with dreams gives the film the scope to analyse many tenets of human experience in the world. It looks at the link between dreams and reality, ideas of freedom, madness, alter-egos and more. Definitely a recommended watch for those who enjoy stunningly animated philosophical or psychological science-fiction.