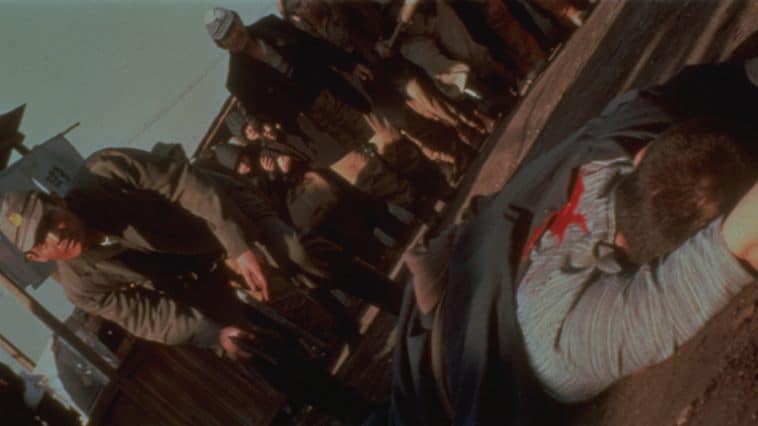 Battles without Honour and Humanity (1973) by Kinji Fukasaku

1949. Hiroshima. The devastation of the atomic bomb and the harsh economic conditions of post-war Japan are apparent in the shanty town that has been erected amongst the rubble. We are introduced in quick succession to a number of people who are later to become important players in the Japanese underworld: Yakuza bosses and captains. A young ex-soldier, Shozo Hirono (Bunta Sugawara), is sent to prison for killing a gangster. Inside he meets Hiroshi Wakasugi (Tatsuo Umemiya), a member of the Doi Family. The two become blood-brothers and Hirono is inducted into the chaotic world of crime. What follows is an unpredictable, bloody, violent, telling of the various power struggles in the decades following the war.

Based on newspaper articles of the time by Koichi Iiboshi, the film has a style that is almost documentary-like in places, going so far as to present on screen the names and dates of death of the gangsters who are killed. It requires some concentration to keep in mind all the characters and their allegiances throughout, but this helps add to the sense of realism. The opening scenes of the film, set in the ramshackle streets of Hiroshima, perfectly set up the brutal chaos that is to follow, as we are pushed through noisy crowds, and see a series of gruesome events taking place simultaneously. It is a masterclass in setting up numerous characters and establishing a tone for the film. The film never lets up this relentless pace, with scene after scene adding to the confusion and devastation that the Yakuza leave in their wake. Directed by Kinji Fukasaku, who later went on to helm the Battle Royale adaptation, this film abounds with his style: frenetic, gory, and with a good eye for framing a scene and telling a multiple character story. The actors all do a good job. The music by Toshiaki Tsushima suits the film well, setting the feel for the period.

I would highly recommend this film to fans of the Yakuza genre as one of its finest examples. Although the film does have great flair and stylishness, it does not necessarily glorify the violence. The killings are instead shown to be a mundane affair, taking place so regularly that you become almost desensitized to them. It is a great look at post-war Japanese society from the perspective of the Yakuza.