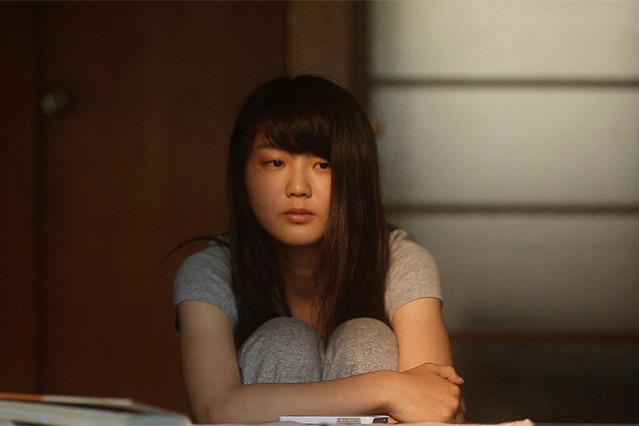 Taste of Emptiness (2017) by Marina Tsukada

A moving story about a young high-school girl suffering with an eating disorder. Satoko (Haruna Hori) appears to be a happy and healthy teenager, part of her school dance club with her circle of friends. She lives with her parents and older brother, Keita. But unbeknownst to both friends and family, Satoko is dealing with an eating disorder. Counting calories in a diary, fretting over what she is able to eat, alternately binging and purging, taking scalding hot baths, her life is an endless round of self-destructive behaviours. Following an argument with her family, Satoko moves in with her closest friend Kanae. She also finds the courage to visit a doctor, where she meets an older woman, Maki (Sakie Hayashida), who is dealing with her own mental health issues.

Written and directed by Marina Tsukada, the film is based in part on the director’s own experiences of this condition while at university. The central performance by Haruna Hori captures the internal turmoil of the character, constantly pacing, furtively noting calories in her diary, concealing her actions from those around her, and her often tentative, almost fearful, reactions to food. These sorts of compulsive behaviours and the nervous energy accompanying, no doubt guided by the director’s first-hand knowledge, are very believable. The film focusses entirely on Satoko’s condition, and the effects it has on her, refraining from unnecessary subplots or attempts to insert a morality or message to the story. It does not need it. What we have is a raw, powerful portrayal of the alienating, distracted, loneliness that typifies many mental illnesses. The film offers no easy answers or explanations, hinting only subtly at pressures faced by girls such as beauty standards, or the way that valuing self-worth can be harmfully linked to appearance. Instead we are largely left alone with Satoko, and Hori’s incredible performance, and little by little we come to completely sympathise as we follow her routines. The direction, often isolating her, or else shutting her out of sight, are an excellent way of allowing the audience in part to experience this condition along with her, or at least to sense some of what is happening internally. The same is true of the long takes, that force the viewer to sit alone with Satoko, creating a sense of discomfort and helplessness. The character of Maki, who is suffering a suicidal manic-depression, and their friendship, is the closest the film comes to having a narrative element, but as with Satoko, we are given no easy answers, only glimpses of what causes her erratic behaviours. Sakie Hayashida does a great job with this character, with a bubbly charm hiding deep seated fears.

“Taste of Emptiness” is an exploration of an experience which will be unfamiliar to many viewers, but it does an incredible job of allowing us into Satoko’s life. It doesn’t attempt to explain her condition, or the causes, but simply allows us to spend time with her and see what it is like to suffer with an eating disorder. One of the themes of the film is how these conditions often go hidden. We see Satoko at several points wearing a mask and performing dance steps. Her masked dancer persona is a representation of this soul, trapped in her own experience, desperately attempting to communicate something of how she is feeling, perhaps a mystery even to herself, through her behaviours. Both at the beginning and end of the film Satoko appears as a solitary figure amongst a throng of people, all busy about their own lives. As she disappears into the crowd at the end, the audience are left with the stark realisation that all too often these conditions go unseen, lost and alone amongst a society that is largely unaware that people are suffering in silence. A difficult watch but an emotional and skilfully crafted portrayal of an eating disorder.