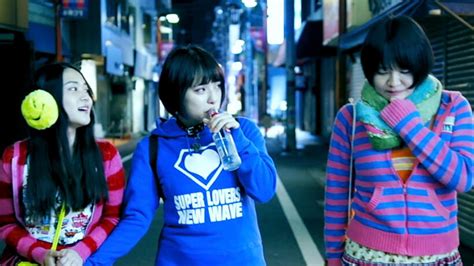 A story of female liberation starring writer-director Iori Kedakai. 30 year old Iori (Kedakai) is picked up by a fashion scout, Tomiyoshi (Tatsuya Nakayama), on a visit to Tokyo, who convinces the shy Iori to take some revealing photographs. He convinces her that it would be a waste not to use the photographs, so she uploads them on a social network and soon has a number of followers. When she returns to her hometown, her childhood friend Shui shares the photos with a much wider audience, causing Iori to flee back to Tokyo in shame. She soon makes friends with the members of an idol group “Betty’s”, Rei (Rei Horie) and Mami (Mami Misami), and a woman who works at an assorted goods store, Hitsuji. With this small group of friends, Iori learns what it means to be a woman, dealing with objectification, and the simultaneous lure and dangers of the modelling and idol industries.

Writer-director Iori Kedakai also stars in this film that gives us a look at idol culture and the effect it can have on people. The story is a journey of discovery for Iori, an outsider from the sticks coming to the big city, with all the promise it holds. The actors all do a great job with their characters, and Iori is a great protagonist, her meek manner at odds with the often vicious dog-eat-dog world of idols. It is interesting to see an idol group that is working at small clubs, dreams of major success still some way away, and all the actors have great rapport and chemistry in their performances. At times the directing is a little rough around the edges, being the first project from Kedakai, but it has something of the vitality and inventiveness of “Love and Pop”, capturing that brightly coloured, youthful energy associated with the subculture of idols. The film features sex and nudity, but for the most part this is hinted at rather than shown. Instead we see the film largely from Iori’s perspective, wide-eyed and innocent, constantly surprised by each revelation about her new friends from the city. The soundtrack is similarly exuberant, featuring hip-hop as well as the bright pop of “Betty’s” show.

“Hysteric Betty” has a lot to say about the female experience, the objectification and infantilization of women, and female empowerment. We see Iori coming to terms with the often conflicting narratives that are given to young women. On the one hand there may be a desire to be seen as sexually attractive, but it comes with the threat of exploitation and not being taken seriously. At one point we see an idol asking if they will consider her book idea, only to be talked down to and told she only needs to be cute, and not to worry about anything else. Iori’s relationship with Tomiyoshi too shows the dangers present for people lacking self-belief. In a twist on the usual stories, the idol group actually seem to find solidarity together. The character of Rei, who we learn does sex work beside her job as an idol, and Hitsuji, whose love of cute things is a disappointment to her mother, offer a heartening message that women should not be ashamed of whatever they want to do or be. A film about breaking free of the restrictions of society and following your dreams.